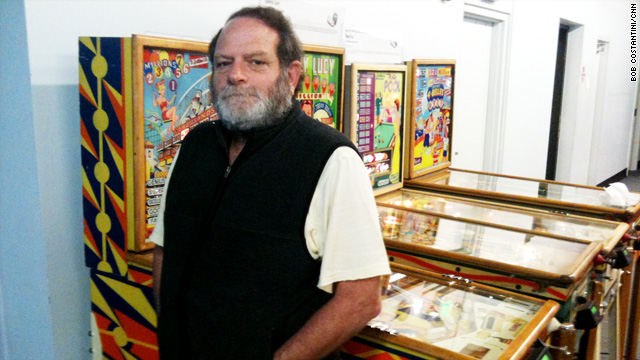 Baltimore (CNN) - It’s a long way and more than three centuries from Château de Bagatelle in France to an entertainment district in Baltimore. That’s how far David Silverman’s passion has come.

An improvised billiards game at the chateau evolved into modern pinball. And if it’s pinball, David Silverman is bound to have it.

Silverman is set to open his National Pinball Museum in Baltimore in the New Year. Visitors will get to play all they want of 65 or so games, with another 90 on display. That’s just a fraction of Silverman’s collection, which is mostly stored in warehouses and buildings on his property in Silver Spring, Maryland.

The museum opened last year in a Washington shopping mall, but Silverman had to find new digs when the mall operators decided to gut the place.

“Without question, the artwork,” Silverman quickly replies when asked what makes a good “table” as pinball aficionados sometimes call the sport. “I think the artwork to me is critical. Good shots, good ramp shots, good knockdowns (targets). The rules [should be] complex enough that I really want to dig into trying to find out how to get a higher score.”

The museum will display pinball games from the 20th and 21st centuries. One section will include pinball games that do not have flippers, often found in bars and often used for gambling in the last century. They were considered games of luck rather than skill. The balls would wind up in numbered holes and getting them in a certain order racked up free games. Bars would often pay money for so many games won, and then delete them with an illegal “knock-off” switch. Many towns banned them.

Getting the museum space ready has taken up a lot of Silverman’s time. He relishes the moment he gets to play.

“I play the game as long as it takes me to get to the end. Some games I have, I still have never reached the end. They call it the ‘Wizard Mode,’ where you’ve done everything possible. You’ve got the highest score, and the game goes completely nuts.”

That’s how the more electronically elaborate games of recent decades operate. Pinball has managed to stay alive, despite video games taking over much of the space in arcades. Addams Family, Twilight Zone and Avatar are hard to figure out, part of the challenge Silverman loves.

For me, the visit is a chance to play a game from my long summer vacations in Ocean City, Maryland. Gottlieb’s Slick Chick gives one point at a time, and has nothing but a simple bell as sound effect.

Two women in tight clothing sport bunny ears on the backglass, though apparently to avoid a Playboy lawsuit, there’s a barbershop quartet between them.

The object is to hit all the bumpers that spell out Slick Chick, in a cross pattern with the common letter “i” in the middle of the playing field.

The thing of beauty about the older games, for me, is their simplicity. It didn’t take long to figure out how to win a replay — just get something like a thousand points or get the ball to roll over a sensor with a red light, called the “special.”

The museum won’t be just for playing and looking. Silverman is installing windows so visitors can look at restoration work. He’s expecting to hold classes on the game he loves.

The old and new games on display have placards above them telling its time period and designer. The legendary pinball makers from Chicago - Gottlieb, Bally and Williams - no longer make the silver ball devices. But their memory is kept alive in a three-story building with giant flippers at the entrance.