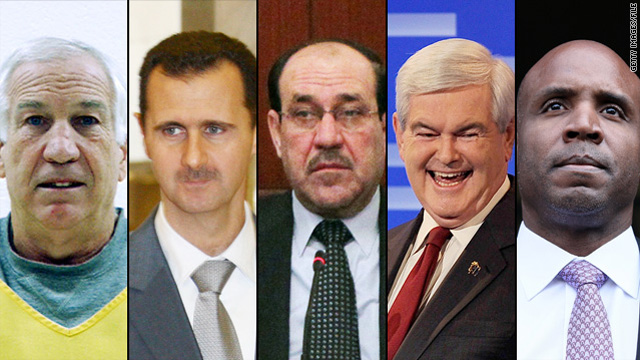 Former Penn State assistant football coach Jerry Sandusky will appear in court at 8:30 a.m. Tuesday for a preliminary hearing, where his alleged victims are expected to testify.

A grand jury report made public last month detailed 40 charges of rape and molestation against the former coach in a child sex abuse scandal that, at the time, involved eight alleged victims.

Sandusky was arrested for the second time Wednesday and charged with four counts of involuntary deviate sexual intercourse and two counts of unlawful contact with a minor, allegedly involving two men who were boys at the time of the encounters.

All of the alleged victims came into contact with Sandusky through his Pennsylvania charity, The Second Mile.

Sandusky's former boss, renowned head coach Joe Paterno, who was fired in November, was admitted to a hospital Sunday morning after fracturing his pelvis in a fall at home Saturday night, a source close to the Paterno family said. Paterno also is being treated for lung cancer.

Syrian opposition: Bloodbath could be imminent in Homs

The Syrian government has warned protesters in the city of Homs to stop demonstrations, hand in weapons and surrender defecting military members by Monday night or face bombardment, an opposition leader said.

The Syrian National Council, the country's leading opposition movement, had warned earlier of a potential bloodbath at the hands of the Syrian regime in Homs.

"If the world continues to watch, then the massacre of Hama in the '80s will be repeated," said Lt. Col. Mohamed Hamdo of the Free Syrian Army. Hamdo referred to 1982, when Syria's military - acting under orders from current President Bashar al-Assad's father, Hafez al-Assad - launched an assault on the city, killing thousands.

The warning comes amid violence in several parts of the nation over the weekend, with opposition figures saying government-backed security forces are cracking down on protesters calling for Syria's president to step down. More than 20 people were killed Sunday in Hama, Homs, Idlib, Daraa and the suburbs of Damascus, according to a network of anti-regime activists in the country.

The Arab League said it will meet this week in Cairo to discuss Syria's willingness to allow, with conditions, an Arab League observing team in the country. World leaders have called on Syria to halt violence against the opposition, which the opposition has reported for months. President Bashar Al-Assad's regime has denied targeting peaceful protesters.

Iraqi Prime Minister Nuri al-Maliki will meet with U.S. President Barack Obama on Monday to discuss cooperation between the two countries as the United States prepares to withdraw virtually all of its troops from Iraq by December 31.

As of two weeks ago, more than 10,000 U.S. troops were deployed in Iraq, down from 170,000, and the number was dropping daily. Iraqi security forces, including army and police officers, are to assume full responsibility for the country's security by the end of the year under a deal agreed to by Iraq and the United States.

The withdrawal will bring to an end the war that began in 2003 with the toppling of Iraqi leader Saddam Hussein. Only about 150 U.S. troops are expected to remain after the December 31 deadline, to assist in arms sales, a U.S. official told CNN, though a large private security force will protect the thousands of State Department workers and contractors staying behind after the withdrawal deadline.

Obama announced the troop withdrawal in October, cutting some unitsâ€™ deployments short. His announcement followed news that negotiations to extend the deadline broke down after Iraq's top political leaders refused to grant U.S. troops legal immunity, opening up the prospect of soldiers being tried in Iraqi courts and being subjected to Iraqi punishment.

Fresh off a debate over the weekend, Republican candidates for U.S. president will face off again on Thursday, less than three weeks before the Iowa caucuses, which is the the first contest in the Republican presidential primary and caucus calendar.

The debate, hosted by Fox News and the Iowa Republican Party, which be at Iowa's Sioux City Convention Center.

Former House Speaker Newt Gingrich is the front-runner for the GOP nomination in latest national polling and in new CNN/Time ORC International surveys in Iowa, South Carolina and Florida - three of first four states that kick off the presidential primary and caucus calendar. The CNN poll also indicates that he's closing the gap with Former Massachusetts Gov. Mitt Romney in New Hampshire, which holds the second contest.

An American soldier suspected of leaking classified documents to the WikiLeaks website is scheduled to go before a military panel on Friday for a hearing to determine whether he will be tried in the case.

Pfc. Bradley Manning is expected to attend the hearing, which may last several days,Â  at Fort George G. Meade in Maryland.

Manning is charged with aiding the enemy, wrongfully causing intelligence to be published on the Internet knowing that it is accessible to the enemy, theft of property or records,Â transmitting defense information, fraud and relatedÂ activityÂ in connection with computers and violatingÂ Army regulations, according to the military.

If convicted of all charges, he would face life in prison and a dishonorable discharge. He has been in confinement for 18 months.

Barry Bonds to be sentenced

Former Major League Baseball slugger Barry Bonds is expected to be sentenced Friday in California for an obstruction of justice conviction.

Jurors who found Bonds guilty in April said he was evasive in his 2003 testimony to a federal grand jury investigating illegal steroids use by pro athletes.

Federal prosecutors want Bonds, 47, to serve 15 months in prison.Â Defense lawyers have argued that a judge should accept the probation office's recommendation that Bonds be sentenced to two years probation, fined $4,000 and ordered to perform 250 hours of community service.

Bonds' testimony in December 2003 was part of the BALCO investigation that targeted employees of a California drug testing laboratory and Bonds' personal trainer Greg Anderson.Â The testimony that led to his conviction came when a grand jury prosecutor asked Bonds whether Anderson ever gave him "anything that required a syringe to inject yourself with."

Bonds told the grand jury that only his personal doctors "ever touch me," and he then veered off the subject to say he never talked baseball with Anderson. In closing arguments two weeks ago, a federal prosecutor saidÂ Bonds lied to the grand jury because he knew the truth about his steroids use would "tinge his accomplishments" and hurt his baseball career.Â Defense lawyers had argued that Bond' thought the creams and ointments Anderson was giving him were made of flaxseed oils.

The SAG show, which presents 13 awards for acting in film and television,Â will be heldÂ on January 29 in Los Angeles. Wednesday's nomination announcement will be carried live on Â TNT, tnt.tv and tbs.com.

The Golden Globes, which presents awards in television and motion picture categories, will be hosted byÂ British comedian Ricky Gervais on January 15.

Her reputation for tough love and one-liners - "Why you give me Kmart when I ask for Cartier?" - has earned Olga Kostritzky admiration from Natalie Portman and "Billy Eliott." Now she's teaching "The Nutcracker" in the Deep South. Meet the ballet mistress who is a character all her own.

Kim Kardashian has teamed up with her daughter North to launch a new TikTok account. cnn.it/3reFwIc https://t.co/miC7B0bV5L
cnni

11:35 pm ET November 26, 2021 RETWEET
Adele broke down in tears during her ITV concert special, "An Audience with Adele," after a surprise reunion with hâ€twitter.com/i/web/status/1â€¦sD
cnni