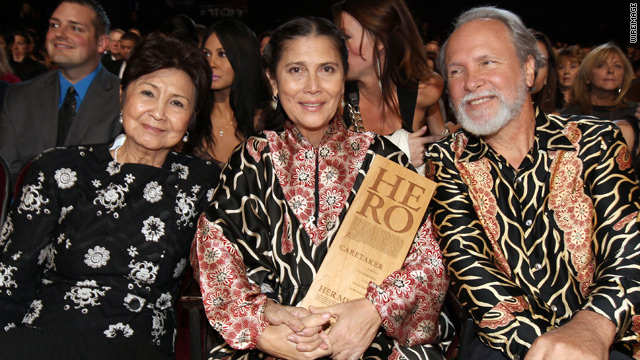 Televised award shows normally celebrate athletes and entertainers for their latest career accomplishments. But Sunday night, the roles were reversed. Celebrities such as Jerry Seinfeld, Ice Cube and Miley Cyrus joined CNN in honoring 10 everyday people who are changing the world. (Meet the Top 10 Heroes)

The issues the Top 10 Heroes tackle are some that span the globe - health, poverty, war, disability. And they tackle them with hard work, commitment and sometimes the most simple solutions: a bar of soap, a soccer ball, a meal, a buddy on the Internet.

RT @CNNHeroes Thanks for showing us that it's never too early or too late to make a difference in the world. #CNNHeroes #inspired

After tearing up watching these big heart heroes,an important question for myself:Do I care enough to do something for others? #CNNHeroes

@cnnheroes I love watching Hero's. It re affirms goodness and the possibility of hope. #payitforward #cnnheroes

[Updated 10:07 p.m. ET] Lim is absolutely sobbing backstage during an interview with Sanjay Gupta. She says she will start a new clinic with the money she's won. "I believe in you, you can do it. That's what we tell all the moms in labor... they just do it because we believe in them."

[Updated 9:59 p.m. ET] And the 2011 CNN Hero of the Year is Robin Lim, a woman who helps poor Indonesian women have healthy pregnancies. "Today on our earth, 981 mothers in the prime of their life will die, and tomorrow again and yesterday. And I'm asking you to help change that," Lim says. Donate to Lim's cause here. 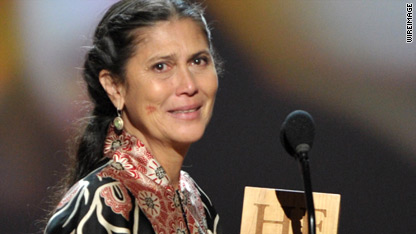 [Updated 9:57 p.m. ET] The Hero of the Year announcement is up next! All of the Heroes were nominated by CNN viewers for their hard work and commitment. Each person in the Top 10 receives a $50,000 grant; the CNN Hero of the Year and receive an additional $250,000.

The Hero of the Year was chosen by the public in an online vote that ended Thursday. Fans can still make a direct donation to their favorite Hero by using Google Wallet.

This is the fifth year CNN has conducted its annual search for CNN Heroes. In those five years, the campaign has profiled more than 160 people on CNN and CNN.com. And there have been roughly 40,000 nominations received from more than 100 countries.

Such power resonating from #cnnheroes stage. It's such a blessing to see how amazing humanity can be

[Updated 9:49 p.m. ET] Taryn Davis was just 21 when her husband, an Army corporal, was killed in Iraq. In 2007, she created the American Widow Project. To date, her nonprofit has provided a community of support to more than 900 young military widows.

[Updated 9:40 p.m ET] "We should not have hungry children in our own backyard," chef Bruno Serato says. Since 2005, Serato has been serving free pasta dinners to children, many of whom are poor and live in motels with their families. Today, Serato provides dinner seven days a week to more than 300 children at the Boys & Girls Club in Anaheim, California. Donate to Serato's cause here

[Updated 9:38 p.m. ET] Backstage, "Glee's" Chris Colfer says, "A lot of times the name 'hero' is given to people who don't deserve it. A hero is someone that thinks for others before themselves and goes off of that instinct and that drive and goes out and does something." What does being a hero mean to you? Tell us here.

Side note: Colfer admits to being a CNN junkie! "I'm convinced that CNN stands for Chris Needs News."

"You should help your community, because without you, there is no community." A Childs wisdom! Mikey's Meals! #cnnheroes

[Updated 9:26 p.m. ET] Amy Stokes is redefining "family" for South African children affected by HIV/AIDS and poverty. Her organization, Infinite Family, has connected almost 500 teenage "Net Buddies" with nearly 300 volunteer mentors from all over the world via the Internet.

"Mentoring makes a difference between a child who survives and one who thrives," Stokes says. "Help us create a world where no children grow up alone."

Surrounded by gang violence in her Chicago neighborhood, Diane Latiker opened her home to area youth and started a community program called Kids Off the Block. Since 2003, her program has helped more than 1,500 young people.

"I always know something good is going to happen today," Latiker says of waking up, still positive in the face of everything she has seen and everything she faces. "Please don't give up on our young people."

[Updated 9:11 p.m. ET] After being stricken with cancer, Patrice Millet dedicated his life to helping children in his native Haiti. His nonprofit youth soccer program provides free equipment, coaching and food to hundreds of participants from the slums and teaches them to become responsible citizens. Donate to Millet's soccer program here

"God works in mysterious ways and he is an angel," Will.i.am tells Sanjay Gupta and Millet backstage. "I thank [Millet] so much for all that you do for the people in Haiti, giving them inspiration and strength. It's people like you who are going to be the difference between Haiti now and Haiti tomorrow."

[Updated 9:04 p.m. ET] Eddie Canales brings his son Chris out to share the CNN Hero award with him... and there's a fatherly fist bump. Must. Hold. Tears. Back.

[Updated 8:59 p.m. ET] So many tweets and comments about the Young Wonder stories tonight - they've really touched our readers' hearts.

ŌĆØThe people who are crazy enough to think they can change the world, are the ones who do.ŌĆØ #CNNHeroes

If an 18 year-old can do so much to improve the lives of others, what's our excuse? #CNNHeroes

[Updated 8:51 p.m. ET] Robin Lim became a midwife after her sister died from complications during pregnancy. Since 2003, she and her team in Indonesia have helped thousands of low-income women have a healthy pregnancy and birth. Donate to Lim's cause here

Kleenex should be the main sponsor of #CNNHeroes

[Updated 8:30 p.m. ET] "What if everybody did something? Together we could really change things," George Lopez says. What are you doing to help in your community? Tell us in the comments below.

I'm watching #CNNHeroes and am crying already. The story about Rachael just brought tears to me eyes @CNNHeroes

"This award is for the true heroes - the hungry children, the forgotten elderly, the neglected veterans and handicapped, the working poor I meet everyday," Dimiceli says. "Wherever there is pain and suffering, I want to remove it."

Backstage Denis is telling Sanjay Gupta that a neuro-scientist once saved his life - so touching! If you're not watching, tune in.

[Updated 8:10 p.m. ET] Sofia Vergara introduces the first CNN Hero, Richard St. Denis. Love the cowboy hat! "I have learned that this wheelchair is an opportunity to make a difference," he says. "God can use all of us."

[Updated 8 p.m. ET] And the show is on... If I squeal quietly, will anyone think me unprofessional?

[Updated 7:41 p.m. ET] Haha, Kid Rock calls himself the "Weird ambassador of goodwill from Detroit." I love his sense of humor. He tells A.J. Hammer it's just a "little ploy to maybe get to heaven one day." Learn more about his foundation at KidRock.com. 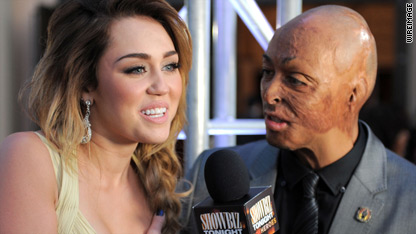 Oh, and Miley Cyrus may be freezing but her dress is totally worth it - absolutely beautiful!

[Updated 7:28 p.m. ET] Ice Cube's on the red carpet. "These are the real celebrities to me," he says. "These are the people not getting the spotlight all the time. They are doing the every day work in our communities." Are you an Ice Cube fan? Tell us why in the comments below.

I love #CNNHeroes – it's one of the rare occasions that celebrities are star-struck by the lesser known (but certainly not ordinary) heroes.

[Updated 7:21 p.m. ET] Anderson Cooper says he always finds himself tearing up backstage during the awards show, inspired by the CNN Heroes' stories. "We all travel around the world all the time and we see people at their worst. Tonight we see the best in people," he says.

[Updated 7:10 p.m. ET] Emma Roberts says CNN Heroes is one of her favorite award shows every year. "It's one of these award shows that I watch with my mom and my sister and it's just so inspiring," she says. "People think you have to be famous to make a difference and these are people who have come from the middle of nowhere and have nothing... There's no such thing as something too small. Just donating time to help people, that matters."

SO honored to be presenting at #CNNHEROES today!

On my way to present at CNN: Heroes, hosted by the great @andersoncooper! I'm so honored to be apart of it!

[Updated 6:50 p.m. ET] I love this quote from CNN.com reader offorandby: "A hero is someone who does what is necessary when others are unwilling or unable." What does being a hero mean to you? Tell us here 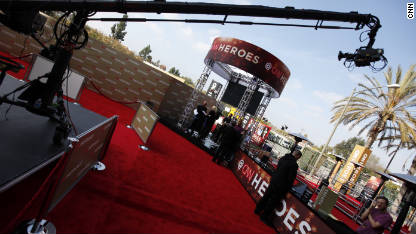 As @AC360 tweets: "Almost complete, just needs Heroes and celebs! RT @cnnheroes: The red carpet looks great #CNNHeroes." Make sure to use the #CNNHeroes hashtag if you're following along with us on Twitter - you could see your tweet on TV or online!

Two US Secret Service employees have been sent home from South Korea just as President Joe Biden embarks on his firŌĆtwitter.com/i/web/status/1ŌĆ”fT
cnni

3:31 pm ET May 20, 2022 RETWEET
In a world beset by conflicts and natural disasters, the number of people who fled their homes and sought shelter wŌĆtwitter.com/i/web/status/1ŌĆ”Ho
CNNweather

3:18 pm ET May 20, 2022 RETWEET
"The lingering unknown is this: will Kim's problems with Covid distract him from such a show of power, or will it mŌĆtwitter.com/i/web/status/1ŌĆ”bd
cnni

3:01 pm ET May 20, 2022 RETWEET
Former US President George W. Bush's slip of the tongue about the war in Ukraine made the rounds on social media, bŌĆtwitter.com/i/web/status/1ŌĆ”6Z
cnni

In a world beset by conflicts and natural disasters, the number of people who fled their homes and sought shelter wŌĆtwitter.com/i/web/status/1ŌĆ”Ho
CNNweather

3:18 pm ET May 20, 2022 RETWEET
In less than 24 hours, Denver could go from having near 90-degree weather to a potentially historic and dangerous sŌĆtwitter.com/i/web/status/1ŌĆ”tK
CNNweather

8:42 am ET May 20, 2022 RETWEET
@BLACKSTEMUSA Im in Ukraine but trying to listen in
sarasidnerCNN

7:17 am ET May 20, 2022 RETWEET
The US Department of Energy is announcing a massive investment in direct air carbon removal projects, in hopes of kŌĆtwitter.com/i/web/status/1ŌĆ”mS
CNNweather

6:56 am ET May 20, 2022 RETWEET
Female Afghan TV journalists describe a 'psychological prison' amid Taliban order to cover their faces on air . Ōü”twitter.com/i/web/status/1ŌĆ”PjHR
sarasidnerCNN

The S&P 500 has dropped 20% from its all-time high and hits bear market territory in afternoon trading. The Dow isŌĆtwitter.com/i/web/status/1ŌĆ”2w
cnnbrk

7:29 am ET May 20, 2022 RETWEET
Oklahoma lawmakers have passed a bill banning abortion from the moment of "fertilization." The measure now goes toŌĆtwitter.com/i/web/status/1ŌĆ”ZG
cnnbrk