The federal government announces new water cuts for the Southwest as the Colorado River plummets into an even deepe‚Ätwitter.com/i/web/status/1‚Ä¶0j 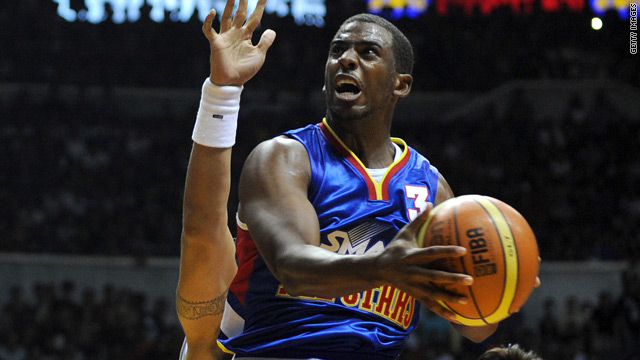 An NBA trade that would have sent New Orleans Hornets guard Chris Paul to the Los Angeles Clippers is off, Sports Illustrated reported Monday.

New Orleans would have gotten second-year Clippers guard Eric Bledsoe, center Chris Kaman, second-year forward Al-Farouq Aminu and the Clippers' 2012 first-round draft pick in a blockbuster move that would have made both teams long-term contenders. ¬ÝBut the league, which owns the Hornets franchise, also wanted guard Eric Gordon thrown in the deal, and the Clippers balked, according to SI.

Now the Hornets may get to retain an unhappy superstar that is certain to bolt to another team in a matter of months.

While the NBA reviewed the deal Monday and said no, ¬Ýit may not be over. There are rumblings that litigation could be filed by Paul's representatives and the union, according to ESPN.

‚ÄúPeople close to this trade, and even around the league, think the league is driving such a hard bargain because they really do not want to move Chris Paul outside of New Orleans,‚Äù ESPN‚Äôs Chris Broussard opined Monday on air hours before the NBA announced its decision.

The vetoed trade comes amid hurt feelings between Paul and NBA Commissioner David Stern after the latter blocked a blockbuster three-team deal last week that would have sent Paul to the Los Angeles Lakers and improved the Houston Rockets and Hornets as well.

Major trade winds hit the league this past weekend. The Boston Celtics sent Glen "Big Baby" Davis to the Orlando Magic. The Lakers‚Äô Lamar Odom was traded to the defending champion Dallas Mavericks (Khlo√© Kardashian, Odom‚Äôs wife,¬Ýtweeted recently¬Ýthat the move to Dallas would be tough but accepted).

But none of those trades involved the league-owned Hornets, which have Stern as a defacto spokesman.

Since the Lebron ‚ÄúDecision‚Äù last year, and especially in the aftermath of the lockout, the league has gotten sensitive to player moves that would totally realign the power structure. Some see it as the NBA, long viewed as a players' league, enforcing its will on its most visible employees.

But for Paul, who only wants to win, the latest antics by the NBA may signal a fight in court - and not the one they play on.