The Pentagon says there is another Chinese spy balloon transiting Latin America. A US official tells CNN it does noâ€twitter.com/i/web/status/1â€¦uD

The Memphis Police Department has terminated another officer in the aftermath of the violent arrest and death of Tyâ€twitter.com/i/web/status/1â€¦iH

A California jury has ruled that Elon Musk is not liable for Tesla shareholder losses after his controversial tweetâ€twitter.com/i/web/status/1â€¦6O 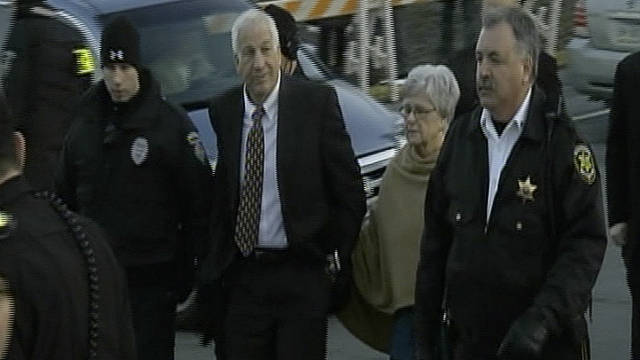 Two former university officials are scheduled for a preliminary hearing Friday in Harrisburg, Pennsylvania, in connection with the Penn State sex scandal.

The former coach faces more than 50 counts related to allegations of sexual molestation revealed in a grand jury report last month. He is accused of involuntary deviate sexual intercourse, among other charges.

About 20 people attended the hearing in support of Sandusky, Amendola said, including his wife, some of their children and some graduates of the Second Mile charity program, which Sandusky founded and from which prosecutors allege he groomed boys for subsequent abuse.

HLNTV: Did Sandusky lawyer use hearing as 'strategy'?

The case has drawn national attention even as more allegations of sexual abuse have surfaced over the past two months. In addition to Penn State, high-profile sex abuse cases have surfaced at Syracuse University, The Citadel, the Amateur Athletic Union and the University of Oklahoma.

The head of the Amateur Athletic Union told CNN in an exclusive interview Tuesday that his organization handled matters expeditiously after learning its former director was accused of sexually abusing boys.

"We formed our own internal investigative process, and then once we found out who the accusers were, we immediately went to the police department," AAU President Louis Stout said. "We didn't sit on this. No one has acted improperly within the Amateur Athletic Union regarding these accusations."

Robert "Bobby" Dodd, recently the group's CEO, is accused of sexually abusing boys in the 1980s when he was a YMCA coach based in Memphis, Tennessee.

Keith Johnson, the president and CEO of the YMCA of Memphis and the Mid-South, said he felt â€śgut-punchedâ€ť when he heard of the allegations recently.

The allegations against Dodd, 63, arose after anonymous e-mails and phone calls in early November and catapulted into national prominence when two former basketball players told their stories to sports network ESPN's "Outside the Lines."

Listen to a CNN Radio Podcast on the impact of sexual violence on boys and men:

Bobby Davis and his stepbrother, Mike Lang, have alleged that Fine repeatedly abused them when they were children.

The lawsuit comes days after Boeheim apologized for accusing Lang and Davis of fabricating their allegations. "I believe I misspoke very badly in my response to the allegations that have been made," he said. "I shouldn't have questioned what the accusers expressed or their motives."

"Over the past 35 years, Boeheim had hundreds, if not thousands of opportunities to observe Fine's relationship with boys," Allred added.

Davis told CNN's "Piers Morgan Tonight" later Tuesday that he hopes his actions encourage other young victims of abuse to come forward. "I am coming forth to (help) give children the courage to talk. I was afraid all my life to talk about this," he said.

Fine has maintained his innocence, saying the allegations are "patently false in every aspect." He has not been charged with a crime.

A University of Oklahoma professor has been suspended with pay amid allegations of sexual abuse, school police said Tuesday.

While charges have not been filed, the university has barred associate professor Dwain Pellebon, 54, â€śfrom any contact with students and from use of any university facilities,â€ť said Catherine Bishop of the university police department.

"In accordance with university procedure, he was immediately placed on administrative leave with pay until more of the facts of the investigation are known at which time it could be changed to without pay," OU officials said in a statement.

Norman police arrested Pellebon Friday on two complaints of rape in the first degree and one complaint of lewd acts with a child under age 16, according to CNN affiliate KFOR.

"We can say there is one alleged victim, and we are working to determine if there are any additional victims," Tom Easley with the Norman Police Department said, KFOR reported.

He is out of jail on a $75,000 bond and has denied the allegations through his attorney, the station reported.

Attorneys on Wednesday announced a civil lawsuit against The Citadel on behalf of the mother of a young man who alleges he was sexually abused by Louis ReVille, a former counselor at the academy in Charleston, South Carolina.

The alleged abuse took place on several occasions in 2007 and continued for more than a year, CNN affiliate WCBD reported.

The lawsuit, announced in Charleston by attorneys Jeff Anderson and Gregg Meyers, alleges that The Citadel was grossly negligent in not reporting knowledge of an alleged previous abuse case by ReVille, according to WCBD.

ReVille was arrested in October on charges of molesting at least five children in alleged incidents around Charleston, unrelated to The Citadel accusations. According to court documents, he has admitted guilt in at least three cases involving incidents between November 2010 and October 2011.

The US city that keeps changing the world cnn.it/40s8LGw
cnni

9:00 pm ET February 3, 2023 RETWEET
The Pentagon says there is another Chinese spy balloon transiting Latin America. A US official tells CNN it does noâ€twitter.com/i/web/status/1â€¦T0
cnni

The US city that keeps changing the world cnn.it/40s8LGw
cnni

9:00 pm ET February 3, 2023 RETWEET
The Pentagon says there is another Chinese spy balloon transiting Latin America. A US official tells CNN it does noâ€twitter.com/i/web/status/1â€¦T0
cnni

The Pentagon says there is another Chinese spy balloon transiting Latin America. A US official tells CNN it does noâ€twitter.com/i/web/status/1â€¦uD
cnnbrk

8:20 pm ET February 3, 2023 RETWEET
The Memphis Police Department has terminated another officer in the aftermath of the violent arrest and death of Tyâ€twitter.com/i/web/status/1â€¦iH
cnnbrk

7:30 pm ET February 3, 2023 RETWEET
A California jury has ruled that Elon Musk is not liable for Tesla shareholder losses after his controversial tweetâ€twitter.com/i/web/status/1â€¦6O
cnnbrk