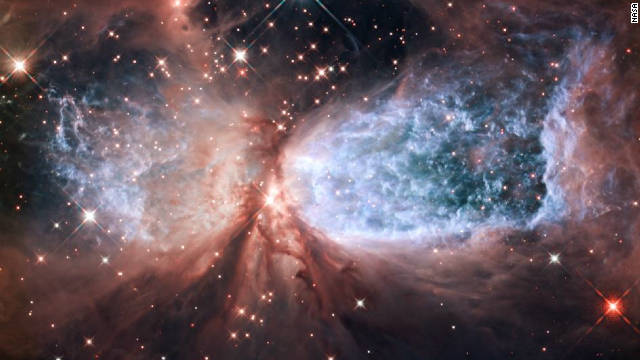 Far, far away in an isolated part of the Milky Way lies a star nursery housing a celestial spectacle so beautiful that the Space Telescope Science Institute has taken to calling it a “Holiday Snow Angel."

Spectacular images and video released by the NASA-built observatory Thursday show a star-forming region in the constellation Cygnus (the Swan) nearly 2,000 light years from Earth.

In official terms, Sharpless 2-106 (doesn’t have the same ring, does it?) gets its looks from an extreme confluence of heat and motion and features a ring of particles that “acts like a belt,” according to a press release. The hourglass-like shape in the middle is created by gaseous particles orbiting the star.

"Though we nickname this a ‘Snow Angel’ there is nothing angelic about what's happening in the picture," Villard said. "A super-hot star much larger than our sun has twin blowtorches of hot gas shooting out into space. The star is destined for a short life and will then explode as a supernova, disintegrating everything around it."

The nebula of S106 is in a region containing several hundred brown dwarfs, objects that are best described as star-planet hybrids.

The image is a composite of several exposures and was captured in February by Hubble, the release said.

Hubble, a joint effort between NASA, the European Space Agency and the Space Telescopic Science Institute, has been churning out awesome images of the cosmos for much of its 20 years in existence.