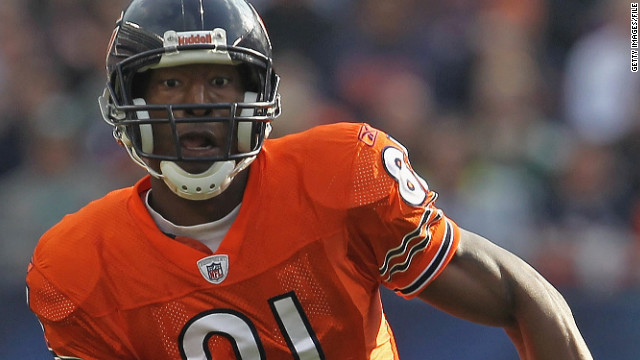 It's been an eventful week in the sports world. Readers saw all the headlines and wondered how and why such successful people could find themselves in such troublesome situations.

This story is about how the U.S. Attorney's Office in Chicago said now-former Chicago Bears receiver Sam Hurd would likely be processed and released on a $100,000 cash bond Friday evening. Many readers reacted by blaming the incident on the sudden wealth bestowed upon young, successful athletes.

gary: "Money corrupts. Many pro athletes were poor, with little real education (despite the gift degrees from big colleges), and when these thug-types get the chance to have guns, dope, bling, women, and more cash, they jump for it. Pro sports are a joke. How silly to sit and watch others play a game ... and pay royally to do so."

For many commenters, the incident just didn't make any sense.

Lost: "I.D.I.O.T. Not just anybody gets to play in the NFL, why blow this opportunity on something as risky as this? Who was this guy associating with? There's no way he stumbled upon this plan himself."

AC Summers: "The feds can put a case on anyone they want and get anybody to become an informant and set someone else up. The accused cannot do anything about it. Can't sue the federal government, you have to pay fines, and in most federal cases the accused in always found guilty to some degree."

One commenter gave his theory on what might have happened in a sort of narrative format:

Sam: "Everybody wants to be big time. A big shot. 'The Man.' This story is the classic portrait of a guy who had a talent in an activity that has has a time limit on it. After years of watching television, this athlete thinks the drug trade is a profit if he can get above the street level to the kingpin level. Dummy, he did this thinking he was on his way to setting up a future at the highest levels of the drug trade business. Oh, yes this is a business, and it is illegal and it's sad, but it seems to me that cheating and dealing in the illegal aspects of life is the only way to make it these days."

One reader suggested that drug testing rules should be strengthened.

Ken: "And you know the worst thing in this? Hurd may have been able to deal drugs to other NFL players due to the lax drug testing, which is all due to resistance from the players union. They don’t want their members tested regularly and at random without notice like Olympic level sports. On no, they have to be tested prior to the season and then only within reason during the season, and even then with prior knowledge of the test coming. Perhaps the leaders of the players union know something about this? So they keep fighting drug testing as they know what the results will be during the season. If only the union would stop resisting modern drug testing practices to ensure a clean sport, then there would be no place for potential dealers like the accused in this case."

We had a lot of readers say they were appalled at the allegations.

Disgusted: "I can't understand why someone making over $600,000 a year would get tied up in dealing drugs. When is enough really enough? If someone can't live on that much money and put a lot away for retirement, something is really wrong."

Alaska: "By the time he gets out of prison he will be around 50 years old, his kid will be fully grown and probably have a kid/kids of their own and his wife will be remarrried. Good job Sam Hurd, hope it was worth it!"

Dark Cobra: "Drug dealing on any level is shameful but for an NFL player to be dealing poison (drugs) on the scale he was attempting to do should result in him being put under the jail!"

And some were feeling cynical.

Pura Vida: "This is how this story will unfold: the guy will eventually plead guilty, will get a lesser sentence, will scream 'I repent,' his team will bring him back and Nike will offer him a huge endorsement contract. ... Next story please."

G-Money: "Mo' money, mo' greed. It's true for Wall Street bankers that thrust us into a recession and it's true for over paid athletes."

Some said it was typical of athletes.

Ambassador Spock: "This can only help my prison fantasy team."

One Bears fan shrugged it all off.

Mister Reality: "Is this really a surprise to anyone? I mean, he did play in Dallas for a few years. I'd be more surprised if someone came away from that team with a clean record. As a diehard Bears fan, I was shocked at the news and I'm not going to rush to judgment, but the case does seem pretty solid, from the tidbits of information we have here. If he is involved this deeply, we don't need him on the team nor in the NFL."

But that's not the only story people are talking about. Here's a couple more:

Barry Bonds gets probation, house arrest for obstruction of justice

Baseball legend Barry Bonds was sentenced Friday to two years of probation and 30 days of house arrest for obstruction of justice in a grand jury inquiry into illegal steroid use by professional athletes. Commenters were from three camps.

First, several commenters were saying the sentence was too light.

JohnRJohnson: "A slap on the hand. Not nearly enough. This guy is probably the most disliked player in the history of Major League Baseball, with the singular exception of Ty Cobb. He is a sullen, hostile, arrogant man-child who won all of his records by cheating. Every batting record he holds should be erased from the books for the good of the sport. In fact, every batting record since Mark McGwire stole Roger Maris' single season HR record should be erased."

Second, others said the case was overblown, with some adding our society should be going after white-collar criminals instead of athletes.

DrunkenMom: "Good for him. The government had no business with this nonsense and they should have been going after our corrupt government officials instead."

Third, still others were debating the effects of steroids.

OhPoorMe: "Whether you take steroids or not, you still have to hit a round ball with a round bat, squarely. And that remains one of the hardest things to do in sports. He deserves credit for his accomplishments."

JohnRJohnson: "Steroids not only add strength and mass. They also can improve hand-eye coordination and greatly increase 'bat speed.' He doesn't deserve any credit. He cheated."

ByteMee: "Agreed. And JohnRJohnson, nobody knows what the old timers took back in their day. Maybe Maris took something that helped him. Was there testing then?"

ToddC: "He deserves credit because, as we've come to learn in the last few years, he was playing on an even playing field. He may have cheated, but none of the other many, many steroid users came close to 70 home runs in a season. He faced numerous steroid-using pitchers. He was the best of his era. Yes, it happened to be the steroid era, but we generally compare players to their contemporaries anyway."

A Pennsylvania judge ruled Friday that the perjury case against two former Penn State university officials will go to trial over their roles in a child sex abuse scandal involving former assistant football coach Jerry Sandusky. Readers have been debating the somewhat disturbing portions of the case (including an alleged "shower scene") for quite some time, talking about the culture of teams and questioning why it's taken so long for people to come forward.

Some said they were creeped out by Penn State, although others spoke in defense of it.

blancanvas: "Holy crud, if I were a student at Penn State I would seriously transfer the heck out of there right about now!"

sidewiskers: "Please don't judge a whole university because of a few people's actions. I attended college there, and so did both of my children. We all got a wonderful education - there is much more to Penn State then one isolated incident."

This reader wondered if problems developed because there were no women around to balance things out.

Jag0419: "Whether it's sports or politics, it's another case of men behaving badly. This one happens to be a pedophile. I'm getting so tired of it. It's like every frickin' institution where there are few to no women sharing power (i.e. sports, religion, politics) so many guys can't control it. I'm getting really tired of it."

One commenter wanted to see victims come out and speak against the alleged incidents.

NotSilentOne: "Really don't understand why the DA's office did not offer anonymity for all that came forward. You have to realize that this guy has abused over 100. The DA's office does not have the manpower to handle the testimony of all the victims. Just really wish at least 80 would come forward. To all the victims out there - come forward, be strong, it was not your fault. You will not be ridiculed and should feel no shame. We know that you are out there."

Lots of blame got heaped on Mike McQueary, the star witness for the prosecution, but there were also lots of defenders.

CNNReaderCNN: "5% of boys and 18% of girls are sexually abused, and this number is probably underreported. There must be many adults who know this and choose to keep quiet because it isconvenient to do so. McQueary actually went to the several authorities and told them what he saw, where keeping quiet would have been the easiest thing to do. I am sick and tired of these self-righteous people who keep judging and condemning McQueary, who is the only person who took ANY action, and keep saying they would have done better. Sandusky was abusing many boys, over many decades, in public places like gym showers, so there must have been many, many eyewitnesses who witnessed similar things and chose to do nothing. They are not likely to come forward now either, though that would help the prosecution, because they will fear the public's wrath. Give the man McQueary a break, he is a good man in my book at least."

julri: "The issue is according to his own testimony. He reported it to his superiors that he thought was the police. 10 days later he finds out the only thing they did was bar Sandusky from bringing in any children on to campus. He washed his hands of it after that. Where was his outrage? What if it was your son or his? I know full well what I would have done having had children. We are not talking about adults here we are talking about a 10 year old boy being sodomized in a shower by a disgusting old man! Anyone that chooses to do nothing becomes just as guilty as perpetrator in many peoples eyes. We are talking about children here, we all bear a responsibility to them from predators inflicting harm. As a grown man he should have done more!"