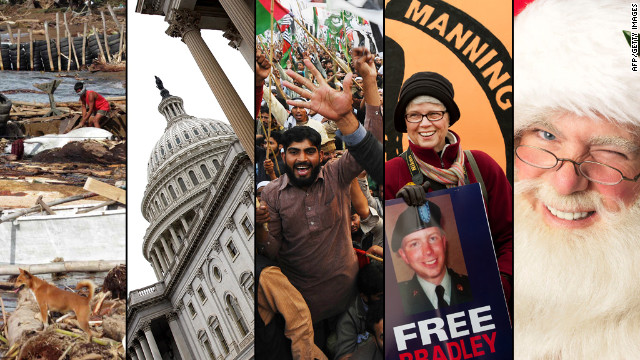 Aid workers are scrambling to help survivors of a tropical storm that the Red Cross says killed more than 650 people in the southern Philippines late last week.

Philippine Red Cross Chairman Richard Gordon, who said the situation was a "severe humanitarian crisis," planned to travel to the affected area Monday.

Flash flooding overnight Friday, following 10 hours of rain, fueled the devastation. As much as 8 inches of rain fell within 24 hours in some areas.

Survivors in the hardest-hit areas are contending with no electricity or clean drinking water.Â An estimated 100,000 people are displaced, according to the country's Department of Social Welfare and Development.Â Authorities have started distributing food rations for some 10,000 families affected by the storm while also handing out thousands of blankets and mosquito nets, the Red Cross said.

A wintry storm brewing in the Southwest is expected to bring blizzard conditions and heavy snow accumulations of more than 1 foot to the southern High Plains Monday, making travel across the region dangerous if not impossible, CNN meteorologist Sean Morris reported.

END_OF_DOCUMENT_TOKEN_TO_BE_REPLACED

Thousands of Palestinians celebrated the release Sunday night of 550 inmates from Israeli prisons, part of the second phase of the deal that won the freedom of captured Israeli soldier Gilad Shalit.

The revelry in the Mukataa compound in Ramallah - the long-timehome to the late Palestinian leader Yasser Arafat - ran late into the night. Tayeb Abdel Rahim, general-secretary in Palestinian President Mahmoud Abbas' office, was among those officials greeting the line of freed prisoners, as they all paid their respects at Arafat's grave.

Hamas' armed wing, the Izzedine al Qassam Brigades, welcomed the news even as they, like Rahim and other Palestinian leaders, continued to push for the release of others in Israeli custody.

"It's a great accomplishment, but it's not the end," brigade spokesman Abu Obieda said Sunday night. "We will work toward liberating all our prisoners."

The Israel Defense Forces said in a news release Sunday night that the International Red Cross assisted in the release process, which it noted at 10:30 p.m. had been "completed."

Pakistan's president returned to the country early Monday after having undergone medical treatment in Dubai, an official told CNN.

President Asif Ali Zardari, who flew with his daughter and doctor, landed at an air force base in the southern port city of Karachi, said Sindh Home Minister Manzoor Wassan.

Sindh is the province where Karachi is located.

The president's sudden departure from Pakistan on December 6 sparked rumors in the country of his possible resignation and a soft coup.

The Kansas City Chiefs beat the Green Bay Packers on Sunday in Arrowhead Stadium, ending the 2011 Superbowl champions' quest for a perfect season.

Despite the loss - the Packers' first in 20 games - Green Bay remains firmly atop the NFC standings. The Chiefs are in last place in the AFC West.

Former Czech President Vaclav Havel, one of the leading anti-Communist dissidents of the 1970s and 1980s, has died at the age of 75, Czech Television announced Sunday.

Havel, a puckish, absurdist playwright turned political activist, spent four and a half years in prison for opposing Czechslovakia's Communist government before emerging as a leader of the Velvet Revolution that swept it aside in 1989.

He went on to become president of Czechoslovakia, and of the Czech Republic when the country split in two at the end of 1992.

A deeply serious thinker given to long, rambling statements in presidential speeches and conversation, Havel also had an impish sense of humor, reportedly whizzing through the long corridors of Prague Castle on a scooter after becoming president.

It was his love of rock and roll as much as his moral outrage at the Communist system that brought him to prominence.

He co-wrote the influential Charter 77 anti-Communist declaration in protest at the arrest of a Czechoslovak rock band, the Plastic People of the Universe.

A perennial contender for the Nobel Peace Prize, Havel never won, but remained active in anti-Communist causes from Cuba to China until his death.

Violence between pro-democracy protesters and Egypt's security forces erupted for a third consecutive day Sunday as reports of casualties escalate.

Protesters captured an army officer in uniform and beat him before debating whether to swap him for a demonstrator who has been captured by the military.

The Egyptian stock market plunged amid the growing violence, losing 6 billion Egyptian pounds (about $1 billion) in the opening hours Sunday.

At least four bodies have been found and 49 people are missing after an offshore drilling rig capsized in the Russian far east Sea of Okhotsk, the Russian Emergency Situations Ministry said Sunday.

At least 14 people were rescued from the rig, which was being towed from Kamchatka, regional Emergency Services spokesman Aleksandr Ivelsky said.

But he insisted that it was too early to declare that the four people spotted in the water without signs of life were dead, since rescuers had not yet recovered the bodies.

There were 67 people aboard the Kolskaya platform, which was subcontracted to a company working for the Russian energy giant Gazprom, state news agency RIA-Novosti reported.

Two ships were on the scene, the icebreaker Magadan and the tugboat Naftogaz-55, and will work on rescue operations through the night, Ivelsky said.

Helicopters were involved in the early phase of the rescue, which was made more difficult by the storm that sank the rig, Ivelsky said. They have stopped flying for the night but will resume work in the morning, he said.

The rig was floating about 124 miles (200 km) from Sakhalin Island, authorities said - north of Japan and northeast of China.

Taimuraz Kasayev, a spokesman for the regional emergencies service, told RIA-Novosti the accident poses no environmental danger because the rig's fuel stocks were hermetically sealed and would not spill.

The television channel Russia Today reported that the rig was being towed into position when pumps failed, causing it to take on water and sink.

Devastation from a tropical storm that deluged the southern Philippines mounted on Sunday, with the death toll rising to 548, military officials said.

About 370 people are missing, the Philippine Red Cross said, after entire villages were swept away. The agency offered a different death toll than the military - 532 - but it was not clear why.

The stench of death permeated the air as aid workers scrambled to help survivors.

The vast majority of the dead were found in the port cities of Iligan and Cagayan de Oro, according to military and disaster officials. Water-logged bodies from washed-away villages floated at the shoreline, on the northwestern coast of Mindanao island.

Five people were killed in a landslide, but virtually all others died in flash flooding after Tropical Storm Washi, which is called Sendong locally.

Survivors in the hardest-hit areas now contend with no electricity and a lack of clean drinking water. One woman in Cagayan de Oro collected murky brown floodwater in a bucket, just meters away from where a destroyed vehicle was submerged.

Flash flooding overnight Friday - following 10 hours of rain - fueled the devastation. As much as 20 centimeters (8 inches) of rain fell within 24 hours in some areas.

As the last U.S. soldiers exited Iraq Sunday and debate was raging about the nation's future, political crisis erupted in Baghdad that raised fears of more sectarian strife to come.

Iraqiya, a powerful political bloc that draws support largely from Sunni and more secular Iraqis, said it was boycotting parliament, a move that threatens to shatter Iraq's fragile power-sharing government.

The move pits the largely Sunni and secular coalition against the government of Shiite Prime Minister Nuri al-Maliki.

Iraqiya contends al-Maliki is trying to amass dictatorial power and many believe al-Maliki was simply waiting for the Americans to leave before making his move.

It all makes for burgeoning political chaos and raises serious questions about whether democracy and human rights can take root in the war-ravaged nation.

"The only country that makes U.S. politics look like a picnic is Iraq," said Christopher Hill, the former U.S. ambassador in Baghdad.

Al-Maliki, Hill said, is a man who perceives concessions as weakness. He's a tough guy who knows what he's doing, Hill said.

He managed to forge relationships with the Kurds and peel off some Sunni support to build the majority he needed to put together a government, Hill said. But whether he is the man to unify Iraq, to lead it now, without American presence, is uncertain.

His rivals say that al-Maliki still controls the country's security ministries and all decisions go through him. They also say that the hundreds of people seized by the government in October for backing terrorism and supporting the banned Baath Party are Iraqiya supporters.

Police in New York are looking for a man who doused a woman with a flammable liquid and lit her on fire, killing her, in the elevator of a Brooklyn apartment building Saturday.

Neighbor said the woman was returning home to her fifth floor apartment in Prospect Heights after a grocery store trip.

When the elevator arrived, the man - dressed as an exterminator - sprayed her with an unidentified liquid, set her alight and then fled, police said.

Residents told CNN affiliate WCBS they heard screams and saw smoke - and realized a woman was on fire inside the elevator.

"Myself and someone from the sixth floor went down knocking to get people out. Knocking on doors telling people 'There's a fire, get out, get out," a resident named John told the station. He did not want to give his last name.

Neighbor Carmen Martinez told the station that the victim was a woman in her 60s who had lived in the building since the 1980s.

"She used to give toys and gifts to kids all the time," Martinez told the station.

The attack was caught on two surveillance cameras. Photos that police released of the attacker shows a man dressed in dark blue clothes, white gloves, with a dust mask on his head and carrying a container on his back.

Republican presidential hopeful Mitt Romney has scored the endorsement of Bob Dole, who lauded the former Massachusetts governor in an ad Sunday in Iowa's The Des Moines Register newspaper.

The public endorsement comes one day after the Register - Iowa's largest newspaper - backed Romney in his bid for the Republican presidential nomination and just over two weeks before Iowa's critical presidential caucuses on January 3.

In his advertisement, Dole said Romney is the GOP candidate is best suited to defeat President Barack Obama in 2012.

"I've known Mitt and his family for decades. His parents instilled in him a strong work ethic, rock-solid conservative values, and a deep sense of service to others," the former Kansas senator and 1996 GOP presidential nominee wrote. "These traits - which have shone through in both the debates and in my own visits with him - will serve him well in the White House."