The Trump administration must accept new DACA applications and return to two-year renewals, a federal judge has ordâ€twitter.com/i/web/status/1â€¦rU

President Trump has ordered the majority of US troops to leave Somalia "by early 2021," in just the latest major miâ€twitter.com/i/web/status/1â€¦dm 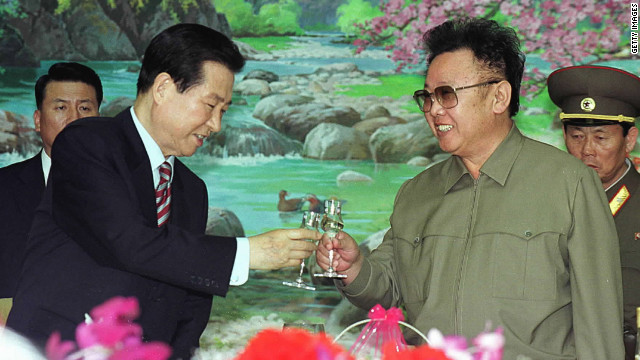 A message to North Koreans was posted on state-run news agency KCNA after the death of Kim Jong Il reflecting on his life and the future of North Korea.

Read the message in full below:

He dedicated all his life to the inheritance and accomplishment of the revolutionary cause of Juche and energetically worked day and night for the prosperity of the socialist homeland, happiness of people, reunification of the country and global independence. He passed away too suddenly to our profound regret.

Kim Jong Il, who was born as a son of guerillas on Mt. Paektu, the holy mountain of the revolution, and grew up to be a great revolutionary, wisely led the party, the army and people for a long period, performing undying revolutionary feats on behalf of the country, the people, the times and history.

Kim Jong Il possessed of personality and qualifications as a great man on the highest and perfect level was an outstanding thinker and theoretician who led the revolution and construction along the path of steady victories with his profound ideologies and theories and remarkable leadership. He was also peerlessly political elder and outstanding and illustrious commander of Songun and peerless patriot and tender-hearted father of the people who recorded the whole history of the revolutionary struggle with ardent love for the country and its people and noble dedication.

Kim Jong Il comprehensively developed in depth the immortal Juche idea, Songun idea, fathered by the President and glorified it as the idea guiding the era of independence with his clairvoyant wisdom and energetic ideological and theoretical activities. He firmly defended and carried forward the revolutionary traditions of Mt. Paektu with pure mind, thereby giving a steady continuity to the Korean revolution.

Kim Jong Il, genius of the revolution and construction, developed the party, army and state to be the party, army and state of Kim Il Sung, put the dignity and power of the nation on the highest level and ushered in the golden days of prosperity unprecedented in the nation's history spanning 5 000 years under the uplifted banner of modeling the whole society on the Juche idea.

Kim Jong Il, supreme incarnation of the revolutionary moral obligation, set a great example in perpetuating the memory of President Kim Il Sung unknown in human political history, thus making sure that the august name of the President, his undying revolutionary career and exploits always shine along with the eternal history of Juche Korea.

Kim Jong Il, great master of politics and illustrious commander born of Heaven, honorably defended the socialist gains, noble heritage bequeathed by the President, by dint of Songun politics despite the collapse of the world socialist system, the demise of the President which was the greatest loss to the nation, the vicious offensive of the imperialist allied forces to stifle the DPRK and severe natural disasters. He turned the DPRK into an invincible political and ideological power in which single-minded unity has been achieved and made it emerge a nuclear weapons state and an invincible military power which no enemy can ever provoke.

True to President Kim Il Sung's behest, Kim Jong Il set a gigantic goal to build a prosperous and powerful country and led an all-people general advance for attaining it, thus making the drive for a great revolutionary surge rage throughout the country and bringing about great innovations and leap forward on all fronts of socialist construction.

As a great guardian of socialism and justice, he conducted energetic external activities for the victory of the socialist cause, global peace and stability and friendship and solidarity among peoples under the uplifted banner of independence against imperialism, thus remarkably raising the international position and prestige of the DPRK and making immortal contributions to the human cause of independence.

In the whole period of his protracted revolutionary guidance, he valued and loved the people very much and always shared weal and woe with them. He continued to make difficult forced march for field guidance, making unremitting efforts and working heart and soul to build a thriving country and improve the standard of people's living. He died from repeated mental and physical fatigue on a train in that course.

The whole life of Kim Jong Il was the most brilliant life of a great revolutionary who covered an untrodden thorny path with his iron will and superhuman energy, holding aloft the red flag of revolution. It was the life of the peerless patriot who dedicated his all to the country and its people.

He passed away to our regret before seeing the victory of the cause of building a thriving nation, the national reunification and the accomplishment of the revolutionary cause of Juche so ardently desired by him, but laid a strong political and military base for ensuring the steady advance of the Korean revolution through generations and provided a solid foundation for the eternal prosperity of the country and the nation.

Standing in the van of the Korean revolution at present is Kim Jong Un, great successor to the revolutionary cause of Juche and outstanding leader of our party, army and people.

Kim Jong Un's leadership provides a sure guarantee for creditably carrying to completion the revolutionary cause of Juche through generations, the cause started by Kim Il Sung and led by Kim Jong Il to victory.

We have the invincible revolutionary army of Mt. Paektu faithful to the cause of the Workers' Party of Korea, the great unity of the army and people closely rallied around the Party, the best Korean-style socialist system centered on the popular masses and the solid foundation of the independent national economy.

Under the leadership of Kim Jong Un we should turn our sorrow into strength and courage and overcome the present difficulties and work harder for fresh great victory of the Juche revolution.

Our army and people will hold leader Kim Jong Il in high esteem forever with unshakable faith and noble sense of moral obligation. True to his behests, they will make neither slightest concession nor delay on the road of the Juche revolution, the Songun revolution but resolutely defend his undying feats and glorify them for all ages.

All the party members, servicepersons and people should remain loyal to the guidance of respected Kim Jong Un and firmly protect and further cement the single-minded unity of the party, the army and the people.

Under the uplifted banner of Songun, we should increase the country's military capability in every way to reliably safeguard the Korean socialist system and the gains of revolution and make the torch lit in South Hamgyong Province, the drive for the industrial revolution in the new century, rage throughout the country and thus bring about a decisive turn in building an economic power and improving the standard of people's living.

We will surely achieve the independent reunification of the country by concerted efforts of all Koreans by thoroughly implementing the Three Charters for National Reunification and the north-south joint declarations.

Our party and people will strive hard to boost friendship and solidarity with the peoples of different countries, guided by the idea of independence, peace and friendship, and build an independent and peaceful, new world free from domination, subjugation, aggression and war.

Arduous is the road for our revolution to follow and grim is the present situation. But no force on earth can check the revolutionary advance of our party, army and people under the wise leadership of Kim Jong Un.

The heart of Kim Jong Il stopped beating, but his noble and august name and benevolent image will always be remembered by our army and people and his glorious history of revolutionary activities and undying feats will remain shining in the history of the country forever."

10:01 am ET December 5, 2020 RETWEET
An Indian schoolteacher, awarded the 2020 Global Teacher Prize for his efforts to promote girls' education at his sâ€twitter.com/i/web/status/1â€¦zg
cnni

9:01 am ET December 5, 2020 RETWEET
A rapidly intensifying Nor'easter is bringing heavy rain and snow to the Northeast today. Meteorologistâ€twitter.com/i/web/status/1â€¦qA
CNNweather