A man whose family thought he had been murdered by serial killer John Wayne Gacy has been found alive and living in Oregon, Cook County Sheriff Thomas Dart said Wednesday.

For 35 years, Theodore "Ted" Szal's family thought they had lost him. But this week they learned he actually was alive and had willingly disappeared years ago while going through a divorce.

‚ÄúI believe Christmas has come early for the Szal family,‚Äù Sheriff Dart said. ‚ÄúBeing able to tell an 88-year-old father that his son, whose picture he has been carrying around for 34 years in his breast pocket, has been found alive is something special.‚Äù

The sheriff's office confirmed that Szal, now 59, is living in Beaverton, Oregon, and left town when he was 24 years old.

"He was not reported missing to authorities because Ted had a history of disengaging from his family for periods of time and then¬Ýre-engaging," the sheriff's office said.

Szal told The Oregonian that he felt like the "black sheep" of his family and decided to leave town after having a disagreement with them.

‚ÄúI threw my keys away down the sewer grate so I couldn‚Äôt change my mind,‚Äù he told the newspaper.

He told the paper he figured his family could find him on the internet if they tried.

END_OF_DOCUMENT_TOKEN_TO_BE_REPLACED

A 21-year-old man in Chicago is charged with battery after allegedly binding his toddler's wrists, ankles and mouth with tape and posting a photo online.

Above the photo of the girl, which Andre Curry allegedly put on his Facebook page, were the words, "This is wut happens wen my baby hits me back. ;)," according to Chicago media reports.

The Facebook page appears to have been taken down. But the image was picked up by other websites.

A public defender for Curry did not immediately return a call from CNN on Wednesday.

The photo at issue shows a young girl with what appears to be painter's tape over her mouth and binding her wrists and ankles.

Eight U.S. soldiers have been charged in connection with the October death of a fellow soldier in Afghanistan, the Army said Wednesday.

Pvt. Danny Chen, 19, was found dead in a guard tower, apparently from a self-inflicted gunshot wound. Chen's family says that until they see the autopsy results themselves, they cannot confirm or deny it was suicide.
The eight officers and enlisted servicemen face various charges, including dereliction of duty, making false statements, maltreatment and involuntary manslaughter, the Army said in a statement.

The Army did not specify what alleged acts by the soldiers resulted in the charges, which were filed Wednesday. But in correspondence with his family before his death, Chen complained of harassment by his fellow soldiers.
At a candlelight vigil for Chen held in Manhattan last week, his brother, Banny Chen, read from a letter the soldier had sent to his family.

"They ask if I'm from China a few times a day. They also called out my name, 'Chen,' in a goat-like voice sometimes for no reason. No idea how it started, but it's just best to ignore it."

The Chen family told The New York Times in October that officials said that Chen had suffered physical abuse and ethnic slurs by superiors, including an incident in which he was dragged out of bed and across the floor for failing to turn off a water heater after showering.

In its announcement, the Army makes no mention of the harassment allegations, but states, "As the legal process continues, further information will be published as it becomes available."
The charges stem from "conduct that occurred in the time leading up to (Chen's) death," an Army official familiar with details of the investigation told CNN. He declined to be identified because the military criminal investigation remains ongoing.

Admirers of the late Czech President Vaclav Havel lined Prague's famous Charles Bridge Wednesday as his coffin was moved to Prague Castle ahead of his state funeral Friday.

A fiercely independent thinker with a wry, playful sense of humor, Havel became president of Czechoslovakia after the fall of the Moscow-backed regime, and the first president of the Czech Republic when it split peacefully from Slovakia three years later.

The long-time chain smoker, whose health was permanently damaged by time in prison under the Communists, died peacefully in his sleep Sunday, his spokeswoman Sabina Tancevova said. 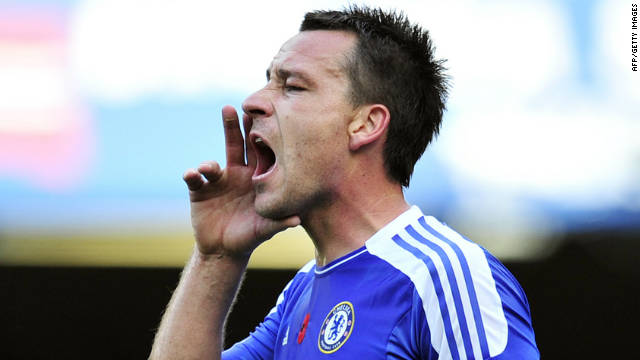 "I have today advised the Metropolitan Police Service that John Terry should be prosecuted for a racially aggravated public order offense following comments allegedly made during a Premier League football match between Queens Park Rangers and Chelsea on 23 October 2011," said Alison Saunders, Chief Crown Prosecutor for London.

"I am satisfied there is sufficient evidence for a realistic prospect of conviction and it is in the public interest to prosecute this case."

Terry will appear before magistrates in west London on February 1, 2012, she added.

Syria's major opposition group condemned the Bashar al-Assad regime Wednesday for "horrific massacres" this week and called on the the Arab League and the U.N. Security Council to take "necessary measures" to protect civilians.

The Syrian National Council said nearly 250 people have died over a 48-hour period and it urged the Arab League to condemn the killings and work with the United Nations "in taking the necessary measures to protect Syrian civilians."

"The SNC stresses the need to take all necessary actions to stop the bloody campaign that is targeting more cities and towns through the regime's militant expansion," the group said in a news release dated Tuesday but issued on Wednesday to CNN via e-mail.

Death toll from storm in Philippines rises above 1,000

The death toll in the Philippines from a tropical storm that struck the south of the country over the weekend has risen above 1,000, a government official said Wednesday.

The number of dead has increased to 1,002, said Benito Ramos, head of the National Disaster Risk Reduction and Management Council.

The grim announcement comes a day after President Benigno Aquino declared a state of national calamity after visiting areas on the island of Mindanao that were devastated by Tropical Storm Washi.

The Japanese authorities on Wednesday raided offices of Olympus, the camera and medical instruments maker that is embroiled in a vast accounting scandal, the company said.

An investigation team from the Tokyo prosecutor's office, the Tokyo Metropolitan Police and the Japanese Securities and Exchange Surveillance Commission visited Olympus premises, according to Tsuyoshi Kitada, a spokesman for Olympus. He declined to give further details on the raid.

The drama surrounding Olympus began after the company fired its chief executive, Michael Woodford, in October and he came forward as a whistleblower on a decades-long cover-up by the company of $1.7 billion in losses.

The Oscar given Orson Welles for "Citizen Kane" some 70 years ago sold for $861,542 in an online auction that ended Tuesday, a Los Angeles auction house said.

The best screenplay award for 1941 was the only Academy Award for the legendary writer, director, actor, although he was given an honorary award "for superlative artistry and versatility in the creation of motion pictures" nearly 30 years later.

Nate D. Sanders Auctions did not identify the winning bidder, but the company did reveal that illusionist David Copperfield was an unsuccessful bidder.

"Orson Welles was not only a magician of the cinema, but also a performing magician himself," Copperfield said, according to a news release from the auction house.
Welles was 25 when he wrote, directed and starred in "Citizen Kane," which the American Film Institute picked in 2007 as the top film of the previous century.