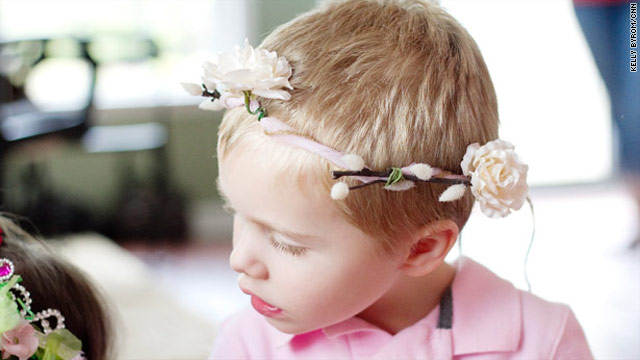 Lego launched a new line of toys for girls that features lots of pinks and pastels and introduces characters like the beautician, the social girl, the girl who loves animals and "the smart girl."

This has upset some parents, who say the toys bring back outdated stereotypes of women's roles in the world.

HLNtv.com Art Director Kelly Byrom wrote that her 5-year-old boy would love the "girly" Lego toys and has been known to pair his fireman costume with a tutu to play "fireman princess." She asked why their isn't similar outrage over the "macho" stereotypes in the boy toy aisle.

Her story sparked an interesting conversation about gender roles and how grownups expect little girls and boys to act.Â  Some commenters said letting a boy run around in frilly pink outfits would make him weak, a target for bullies and possibly even gay. Others said they're just toys and that kids should be allowed to use their imagination.

Where's the outrage over 'macho' Legos?

Some commenters said that boys and girls are different, and that children should be raised knowing that.

Luke Vissering
My son will wear a tutu the day I'm dead. I'm raising my son to be a man and a good man at that. To be helpful, polite and caring. If he plays with a doll, that's fine. He wants to wear a tutu and I'll tell him no. I draw the line there. There is nothing wrong with raising a boy to be a boy.

David Huntwork
If you are indeed truly letting your boy run around in a tutu playing 'fireman' princess not only is that disturbing but probably borderline psychological child abuse. I have three daughers and though we do things like throw the football around or go 'bug hunting' they are still young ladies and not only do I reinforce and encourage that, I remind them of that. Nothing wrong with influencing your daughter with feminine things and your boys with macho things. Understanding and encouraging feminity and masculinity and helping to reinforce gender identity is an important part of being a parent, and you are failing miserably at that if this article isn't just a bit of weird, twisted satire. And where is this boys father who should be providing himself as a proper male role model? If he is in the picture he is doing a horrible job.

Lauren Campbell Bedell
BTW, girls were made to be MOTHERS, and with being a mother we are geared to have certain traits (gentleness, gracefulness, a certain affection for things)...boys are to be men and provide for their families...which means MACHO...hello...that is how nature (and God, if you are a believer) intended it to be. Do you see males acting like females and taking on female roles in the animal world? It does happen, but very rarely...and they're probably the gay ones. LOL. I have nothing against the gay community...I'm just saying. It doesn't make sense for a boy to love things glittery and girly. It just doesn't! Whenever my boys see pink things, they say Ew! I did not TRAIN them that way...in fact, each of my boys have gotten a dollhouse to play with (the Little People kind) as toddlers, but they still grow up hating pink.

Other parents said toys don't have anything to do with kids'Â  gender identity:

Joe Hatch
Oh dear God people, will you let the kids be kids and play. At 3 my son wore a big purple tutu, he is the center for his hockey team and he helped me drag our deer out this season. My daughter is all girl totally 100% girly and wants an old Chevy pickup with a wood stake bed. Let your kids be kids!

Janeen Winne
I absolutely agree. My son is into princesses, glitter, and rainbows. I constantly have to field questions about how I might be turning him gay. I respond with "what's wrong with being gay" and end up with the litany of "well it's such a hard life" to the traditional religious "it's against God's plan". Meanwhile, it's perfectly acceptable and encouraged for his mother to be very athletic and do hardcore obstacle course runs. For whatever reason, people are really put off by perceived threats to masculinity.

Owen Yarbrough
If she were to constantly restrict her sons interests in pink or her daughters interest in dragons and masculine things, she would raise a child that now is an adult that perpetuates the lessons taught by their parent that pink is for girls ONLY and boys should want to be masculine things when they play, or even worse, the child could grow up hating themselves because they love feminine things and they know their parents feelings towards these objects is negative and the role of their gender in society is not what their parents think is appropriate....moral of story...by repeatedly telling your child that they need to fit a certain gender type or role in society you could potentially make them grow up to hate themselves for not "fitting in" to the things that you consider to be normal. Do you want to indirectly make your kids think you hate them by their inability to meet your expectations.

You may not care if your boy wears a tutu, but lets talk about the world as it really is. He will not grow up and be confused because he played with a tutu. He will grow up and be confused because the LGBT community will tell him "you played with tutus, you must be true to who you are and be gay". Television will tell him, "you played with tutus as a boy, you must like men", and "it's ok to be who you really are deep inside". It's sophisticated, but it's brainwashing and stereotyping at its best, and by those who claim they are the victims of such stereotyping.

But one gay reader said it didn't work that way.

Adam Zahn
As a gay man, I never played with "girl toys" as a child. I always played with stereotypical toys for boys. That being said, kids will be kids. Forcing a truck in a kid's hand does not make him want to play with a truck anymore then say forcing your kids to play a sport year after year.

Too many people are equating (though not implicitly stating it) that a boy playing with a girl toy is going to end up feminine and gay. That is not exactly how it works. There is a lot of grey to gender.