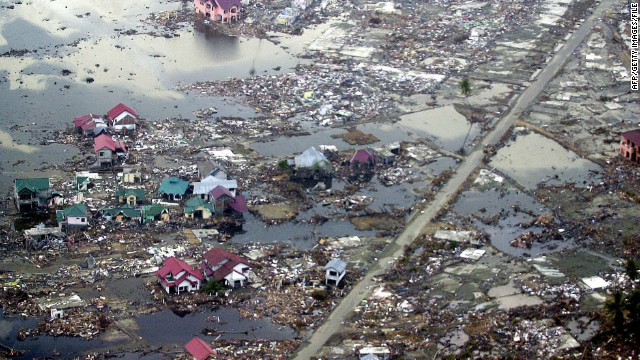 Report: Girl thought to be swept away during tsunami found alive

An 8-year-old girl who was swept away from her mother's arms during the 2004 tsunami that hit Indonesia has been found alive and reunited with her parents, according to the Indonesian state news agency Antara.

The girl, who was identified by state news only as Wati, now 15, was reportedly discovered nearly seven years after the tsunami devastated the coastlines of Asia.

An earthquake with an estimated magnitude of between 9.1 to 9.3 strikes the coast of Sumatra, Indonesia, and triggered a deadly tsunami that killed more than 200,000 people according to the U.S. Geological Survey.

Wati was in the village of Ujong Baroh when flood waters came crashing in.

"Her mother, Yusniar, was trying to take her and her two siblings to a safe place, but somehow she lost her grip on her mother's arm and was carried away by the rushing waters, leaving her mother powerless to help her," the state news agency said. "Yusniar was able to save her two other children, but she and the rest of the family eventually had to resign themselves to the notion that Wati was lost as she never returned nor had anybody in the neighborhood seen her again dead or alive."

The now teenage Wati was spotted in a coffee shop near her home in West Aceh, Indonesia.

She said that "she had come [there] by bus from Banda Aceh and was trying to find her way back home but did not know how. She also could not remember any of her parents' or relatives' names except Ibrahim," according to Antara.

She was sitting in silence in the coffee shop, assumed to be a beggar, the news agency reported.

Later that day, Wati and someone she met showed up at a man's house.

"After listening to the acquaintances account, Ibrahim immediately sensed the girl could be his long-lost grandchild and, after a closer look at the dark-skinned girl, was indeed convinced she was Wati who went missing in the tsunami seven years ago," the news agency reported.

Ibrahim called her parents to immediately come meet her, according to the agency, and the parents confirmed it was their daughter because of a small mole and scar that she had as a child.

Antara said they were told no other details about what happened to the girl when she was swept away other than she had been in several areas throughout Indonesia's Aceh province after the tsunami.