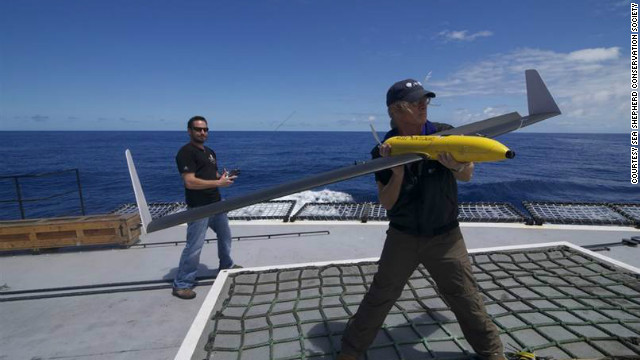 The longstanding battle against whaling has mostly been a game of wait, watch, chase and hope for the Sea Shepherd Conservation Society. But activists are now hoping they'll be able to chase down whaling vessels before they ever make their first kill - with the help of drone aircraft.

Two of Sea Shepherd's ships are outfitted with long-range drones fitted with cameras and detection equipment, which help the ships scan hundreds more miles of ocean for whaling vessels, thanks to a donation from Bayshore Recycling Corp. of Woodbridge, New Jersey.

â€śWe can cover hundreds of miles with these drones and they have proven to be valuable assets,â€ť Capt. Paul Watson said on board the ship Steve Irwin.

AndÂ the technologyÂ has already proved successful for the group, which said it located the Japanese ship Nisshin Maru near the west coast of Australia on Saturday thanks toÂ a drone.

"The Sea Shepherd crew have found the Japanese whaling fleet before a single whale has been killed," the group reported.

But three ships then held off the Steve Irwin and allowed the whaling ship to escape, according to the group.

Normally, that would mean the Japanese ship could head off into a new area and begin whaling again, forcing activists to start all over againÂ to try to find it.

Monday night the group posted on Facebook thatÂ its other ships located the Nisshin Maru and they were locked in on it.

"The chase is on," the post on Facebook said. "Three Sea Shepherd ships and seven ships for the whaling fleet all bound for the Southern Ocean Whale Sanctuary on opposite missions. Sea Shepherd sails for life and the Japanese whalers sail for death."

The group's efforts have been documented on the Discovery Channel's"Whale Wars." It has also been highly criticized by the Japanese government, which saysÂ it continues research whaling with the aim of establishing that whale stocks are sufficient to resume a full commercial hunt in the future, according to Japanese media reports.

The group claims it saved 800 whales by its actions during last season's hunt. Japanese whalers killed 171 minke whales and two fin whales during the Antarctic hunt, according to International Whaling Commission figures.

The drones are a part of the group's anti-whaling campaign this season named "Operation Divine Wind," the same name Japan gave to kamikaze attacks on U.S. ships in World War II. Sea Shepherd says it will have more than 100 volunteers in Antarctic waters to take action against Japanese whalers.

While they will still be chasing down different vessels as part of a cat-and-mouse game, the group hopes thatÂ its new technological weapon will help giveÂ it aÂ significant head start.

"Thanks to these drones, we now have an advantage we have never had before â€“ eyes in the sky," Watson said.