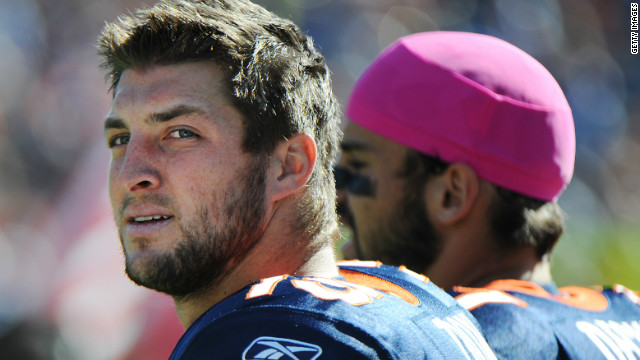 NFL insiders and fans don’t think enough of Tim Tebow to put him in the Pro Bowl, but a decent portion of the American public might be OK with him barbecuing next door.

The Denver Broncos quarterback, who has made a name for himself in part through his outspoken faith in God and a number of comeback wins this season, is the most desirable celebrity neighbor for 2012, according to a survey from the Zillow real estate information company.

The annual survey asks more than 1,000 U.S. adults which celebrity or celebrity couple they’d most like to be their neighbor next year. It should be noted that respondents were given only seven from which to choose, plus “other.” But Tebow topped that list, garnering 11% of the vote.

The survey results were released Wednesday, a day after USA Today announced that Tebow was the United States’ 11th most-admired man for 2011 - two spots behind Bill Gates but ahead of the Dalai Lama - in a USA Today/Gallup Poll.

Tebow began the season on the sidelines but became Denver’s starting quarterback after the Broncos’ 1-4 start. Tebow has won seven of his 10 starts, helping put Denver in position to clinch a playoff spot heading into the final regular-season game this weekend.

His victories - many of them featuring come-from-behind heroics in the fourth quarter - have come despite relatively low passing yardages. He has delighted many Broncos fans, those who cheered him at the University of Florida and many others inspired by his success. But he has also spurred debate on sports talk shows and elsewhere about how good of a passing quarterback he is, how much credit he can claim and how much success he will be have over his career.

Tebow’s victories had some wondering whether fans, coaches and players would select him for the NFL’s Pro Bowl, but the league announced this week that the three signal-callers representing Tebow’s conference would be New England’s Tom Brady, Pittsburgh’s Ben Roethlisberger and San Diego’s Phillip Rivers.

The Denver Post has reported that Tebow finished fifth in voting, meaning he is the second alternate.

As for the other celebrities who were on Zillow’s list for the neighbor survey, they were Jennifer Lopez; Beyonce and Jay-Z; Nancy Grace; and Kim Kardashian. For the list, Zillow chose celebrities that made headlines throughout the year, spokeswoman Lauren Riefflin said.