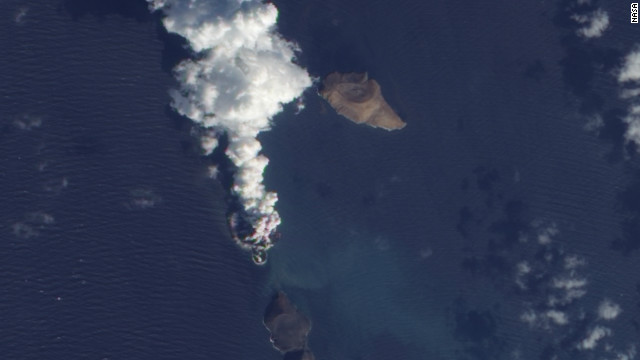 The Red Sea appears to have a tiny new island, courtesy of an underwater eruption.

The island - essentially lava that cooled after breaking through the water's surface - began forming this month between Yemen and Eritrea among the Zubair archipelago, a group of small islands that come from a submarine shield volcano, according to NASA and the Smithsonian Institutionâ€™s Global Volcanism Program.

NASAâ€™s Earth-Observing-1 satellite captured an image (above) showing the new mass with a plume - perhaps volcanic ash and water vapor - rising from it on December 23, NASAâ€™s Earth Observatory website says. The island appeared to be less than one-third of a mile in diameter, according to the Global Volcanism Program.

The image came four days after local news reports said fishermen saw an eruption in the sea, with lava rising up to 90 feet in the air, according to NASA.

The shield volcano from which the Zubair islands stem (the largest of which is 5 kilometers long)Â last erupted in the 19th century, according to the Global Volcanism Program.

Wordwide, new islands emerge from volcanic eruptions about once every few years, and not all of them survive beyond three years, because waves can break them apart, GVP volcanologist Rick Wunderman said Thursday. It's not clear whether the new Red Sea island will last, but the material that emerges from the Red Sea typically is more structurally sound than other areas, Wunderman said.

"That's usually the (material) that you see in the Red Sea - not so rich in gasses, more able to withstand waves and storms," he said.

People looking for an island getaway might want to keep searching, though. "It'd be hard to live there," Wunderman said. "(Fresh) water, safe harbor, all that kind of stuff would be really quite the challenge."

Wunderman said the central to southern Red Sea has seen plenty of volcanic activity recently, with as many as 10 eruptions in the past five years.