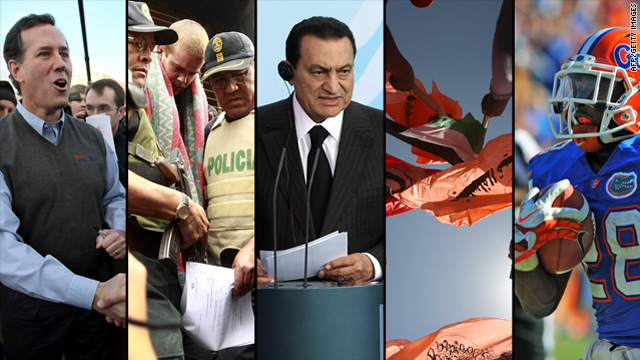 Iowaâ€™s caucuses will kick off the 2012 presidential primary and caucus calendar. Candidates will be looking to meet or beat expectations to gain momentum for the next contest, which is New Hampshireâ€™s primary on January 10.

On Saturday, four days after the caucuses, GOP candidates will take part in an ABC News debate in Manchester, New Hampshire.

With the start of a new year this week, many new laws Â - including some that cover some of the nation's most contentious issues -Â will take effect across the United States.

Among those taking effect Sunday, CNN's Josh Levs reports, is a controversial California provision requiring that schools add "lesbian, gay, bisexual and transgender Americans" to the list of those whose contributions "to the development of California and the United States" must be taught in schools.

In New Hampshire, starting Sunday, minors will have to inform a parent before getting an abortion or seek a court order to avoid parental notification.

The trial of a Dutch man charged with killing aÂ 21-year-old woman in Peru last year is expected to begin Friday in Lima.

Joran van der Sloot is accused of killing Stephany Flores in his Lima hotel room last year. Police say he took money and bank cards from her wallet and fled to Chile, where he was arrested a few days later.

He was charged in September with "qualified murder" and simple robbery, which carry sentences of 28 years and two years, respectively.

Van der Sloot also was once the prime suspect in the case of Alabama teen Natalee Holloway, who vanished while on a graduation trip to the Caribbean island of Aruba in 2005. He was arrested twice but never charged in connection with Holloway's disappearance, which is still unsolved.

He also faces extradition to the United States. In June 2010, a federal grand jury in Alabama indicted van der Sloot on charges of wire fraud and extortion after allegations surfaced that he tried to extort $250,000 from Holloway's mother. He was given a total of $25,000, and authorities believe he used that money to travel to Peru and participate in a poker tournament, where he met Flores.

A trial of former Egyptian President Hosni Mubarak is scheduled to resume in earnest Monday in Cairo following a months-long break.

One session was held on Wednesday - the first since the trial was put on hold. During the break, families of slain protesters tried to have the judge disqualified, though that attempt was unsuccessful.

Mubarak, 83, is charged with ordering the killing of protesters to try to quash the uprising that ended his 30-year rule in February. He also faces corruption charges and has pleaded not guilty. Former Egyptian Interior Minister Habib El Adly, six of his aides and two of Mubarak's sons are also on trial on a variety of charges.

Mubarak's trial proceedings are expected to be held daily starting Monday, a lawyer connected with the case has said.

2012: Predicting the future with hindsight

What will the new year hold? No one can say for sure, but a look ahead can be informed by a look back. Whether it's a presidential election or another Olympics, there's no doubt history will repeat itself, somehow.

For CNN.com's Monday Profile, Todd Leopold takes a look at 2012 and theÂ historical anniversaries the world is likely to celebrate. The story will hit CNN.com's homepage on Monday, but you can get an advance look at it here.

Israeli and Palestinian representatives will meet in Amman, Jordan, on Tuesday.Â  It's an effort to relaunch negotiations between the two sides after more than a year of deadlock.

"Jordan's efforts are based on the belief that the two-state solution, which leads to the establishment of an independent and sovereign Palestinian national state, is a top Jordanian interest," a spokesman for the Jordanian Foreign Ministry said, according to the country's state-run Petra news agency.

Peace talks between the two sides fell apart over a year ago over disagreements on the issue of Israeli settlements in the West Bank.

OK, you're ready for college football's bowl week. Here are the main contests on tap in the next few days (all times Eastern):

Authorities were investigating Sunday after a gunshot wound to the face killed the governor of Argentina's Rio Negro province, state media reported.

A province spokesman confirmed his death, but did not provide additional details about the shooting, the agency said.

At least three people were killed in the western Syrian city of Hama on Sunday, according to an opposition activist group.

The Local Coordination Committees of Syria said a child was among its tally of "martyrs," but did not provide additional information.

Meanwhile, the state-run Syrian Arab News agency said Sunday that the bodies of 21 troops "killed in the line of duty by armed terrorist groups" were taken from military hospitals to their final resting places.

Nuclear rivals India and Pakistan exchanged lists of their nuclear sites Sunday in accordance with a 1988 agreement that prohibits the neighboring countries from attacking the locations, officials in Islamabad said.

Pakistan's foreign ministry confirmed that it turned in its list to the Indian High Commission, and received the same from New Delhi. There was no immediate comment from Indian officials.

Both countries recently returned to talks on conventional and nuclear weapons, Indian officials have said.

No major developments were expected from the high-level talks, which were held in Islamabad last week. The discussions were aimed at building confidence between the two nuclear powers, according to a December statement from the Indian Ministry of External Affairs.

Thousands of fighters attacked a remote town in South Sudan despite the presence of United Nations peacekeepers in the area, a military official said Sunday.
Authorities were counting casualties from Saturday's attack by 6,000 fighters that occurred in a portion of Pibor town that was beyond the reach of the peacekeepers, said Col. Philip Auger of the South Sudan army.

Banana-Sam, a much-loved squirrel-monkey stolen from his enclosure at the San Francisco Zoo, has been safely returned, officials said.
The monkey was found Saturday night - a day after he disappeared from the zoo - at a park by a passer-by who spotted the primate in the bushes, the San Francisco Police Department said in a statement.
The passer-by coaxed the monkey from the bushes into his backpack, and then called the authorities, according to the statement.
Police officers brought the monkey to the zoo, where officials determined it was the missing primate.

A strong earthquake with a magnitude of 6.8 struck off the coast of Japan on Sunday, the U.S. Geological Survey reported.

The earthquake hit 468 kilometers (302 miles) south-southwest of Tokyo at a depth of 348 kilometers, according to the USGS.

There were no immediate reports of injuries or damage.The Pacific Tsunami Warning Center did not issue a tsunami warning.

A former member of a Japanese doomsday cult wanted for the murder of a notary official surrendered after nearly 17 years on the run, authorities said Sunday.

Makoto Hirata turned himself in late Saturday in Tokyo, according to a metropolitan police official, who spoke on condition of anonymity - as is the practice among Japanese police.

Hirata is described as a former senior member of Aum Shinrikyo, or Cult of the Supreme Truth, the group behind the 1995 sarin gas attack on a Tokyo subway. The attack left more than a dozen people dead and thousands injured.