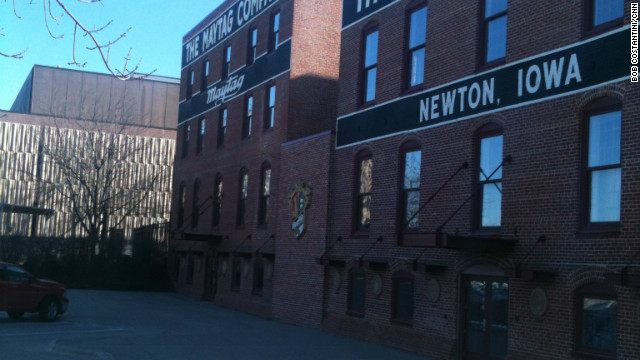 The old Maytag site in Newton, Iowa, was a big talking point four years ago. This year, politicians have been silent about it.
January 2nd, 2012
04:43 PM ET

Editor's note: Listen to the CNN Radio broadcast about a small Iowa town holding it together:

Michelle Doland throws big plastic bags filled with empty soda and beer cans into the back of a semi-trailer. The 37-year-old single mother of two girls works some days at Newton’s can and bottle redemption center.

That’s on top of her other part-time jobs, so many she has trouble remembering them all.

It’s a way to keep the lifestyle she once had as a painter at the Maytag plant in Newton. Its closing in 2007 was a focal point of comments by Republican and Democratic presidential candidates before the Iowa caucuses four years ago.

Now, the candidates hit Newton, a town of 15,000 and Jasper County seat, not mentioning the Maytag closing, which came after the struggling company was bought by Whirlpool. The manufacturing jobs that had held Newton together for more than 100 years were consolidated in Ohio and Mexico. 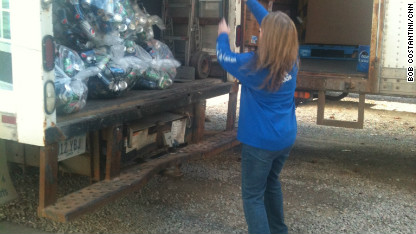 Michelle Doland tosses plastic bags filled with cans into the back of a semi-trailer.

Mayor Charles "Chaz" Allen says his small city has recovered about a third of the jobs lost since Maytag was going full-tilt. But it has been difficult replacing unionized wages, which for Michelle Doland amounted to $22 per hour when the assembly line shut down.
Now, she works the part-time jobs to maintain the middle-class lifestyle she and her girls enjoyed before the washing machine plant had its last cycle.

Top-tier candidates target each other on eve of Iowa caucuses

Allen says he’s frustrated by candidates’ commercials and interviews in which they say, in effect “I can create jobs,” with whatever economic plan they are offering.

“I think ‘I’ is the key word there,” Allen says. “They approach this as ‘I.’ (But) there’s 535 other people (senators and representatives) they have to work this through. I, as mayor, can’t do anything except pick the floating holidays and the trick-or-treat night,” he adds, punching his voice with each mention of the first-person singular.