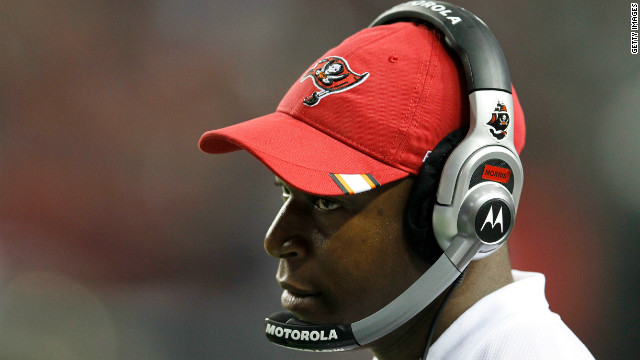 One day after the conclusion of the NFL regular season, league owners got their turn to even the score in some ways. The St. Louis Rams dumped head coach Steve Spagnuolo and General Manager Billy Devaney on Monday. The Tampa Bay Buccaneers canned head coach Raheem Morris.

And the ax may continue to fall, according to news reports around the league. Several coaches have been on the proverbial hot seat in recent months. On Monday, Tampa Bay and St. Louis stopped fumbling around.

On the teamâ€™s website, Rams owner E. Stanley Kroenke thanked the engineers of the teamâ€™s 2-14 season â€śfor their dedication to the St. Louis Rams organization over the past several seasons.

"No one individual is to blame for this disappointing season and we all must hold ourselves accountable,â€ť he said. â€śHowever, we believe it's in the best interest of the St. Louis Rams to make these changes as we continue our quest to build a team that consistently competes for playoffs and championships."

The Rams averaged 12 points a game and finished the season with a seven-game losing streak. Their two wins? A one-point victory against the Cleveland Browns and an incredible 10-point win against New Orleans.

One day after Tampa Bay was embarrassed 45-24 by the Atlanta Falcons, the Buccaneers relieved Morris of his duties, according to the team website.

â€śI have a lot of respect and appreciation for the passion Coach Morris gave to our football team, but this change is one we felt was necessary,â€ť Buccaneers General Manager Mark Dominik said in a statement.

Moments after Sundayâ€™s game, Bucs quarterback Josh Freeman shouldered much of the blame for a disastrous 4-12 season that saw Tampa Bay take several steps backward. â€śI gotta step back and figure out what I can do better, to be a better quarterback, be a better leader for this team,â€ť he said.

The coaching carousel began turning earlier than most this season. In November, Jacksonville fired Jack Del Rio, winner of one postseason game in nine seasons.

Other NFL head coaches on the hot seat:

Indianapolis Colts coach Jim Caldwell: Â He may survive Monday, maybe. All his Colts did was lose 14 games and win the No. 1 pick in the draft, probably Stanford signal caller Andrew Luck. The season wasn't all Caldwell's fault. Without Peyton Manning, the Colts suffered that most pedestrian of all seasons: Nobody cared.

Dallas Cowboys' Jason Garrett: After the 'Boys completed their late-season collapse - losing four out of their last five games - Â a 31-14 loss to the New York Giants has diehards wondering what it will take for Dallas to play in January.

"We just have to get better and that's what we told our team," Garrett told reporters Sunday, according to The Dallas Morning News. "It starts with me as the head coach, our coaching staff needs to get better, our players need to get better. And that starts when we come back and reconvene in March.â€ť

San Diego Chargers coach Norv Turner: The offensive mastermind got his Chargers off to a 4-1 start before a six-game losing streak doomed the season. After five years, can the Chargers afford to continue the status quo?

Philadelphia Eagles coach Andy Reid: The Eagles were supposed to be the team to beat in the NFC, but imploded behind injuries to starting quarterback Michael Vick, an inconsistent defense and ill-timed antics from its top receiver, DeSean Jackson. Reid, according to The Philadelphia Inquirer, may not even want to come back. â€śIâ€™ll think about it when I want to think about it,â€ť the coach was quoted as saying when asked if he would start thinking about his future in Philly.