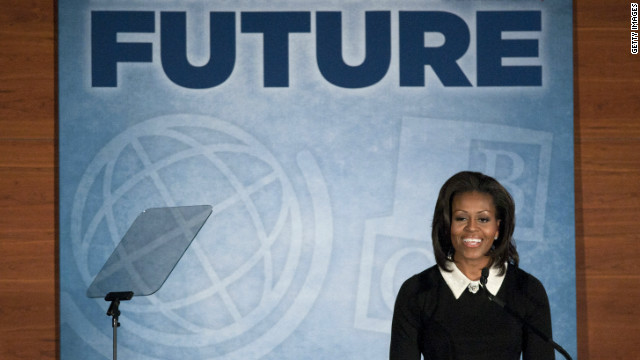 First lady Michelle Obama has been in the forefront of promoting healthier eating habits for Americans.
January 2nd, 2012
02:54 PM ET

Overheard on CNN.com: Americans' struggle to turn fatness into fitness

Day two of 2012 has begun, and people everywhere are starting to dig into those New Year's resolutions. Of course, many want to lose weight. In a timely opinion piece, CNN contributor David Frum says our current way of life dooms us to our fatness, and he commends first lady Michelle Obama for trying to do something about it. Our readers had a bunch of theories of their own.

Why we're getting fatter - and what to do about it

Readers debated the role of diet, exercise and personal responsibility in the struggle to win the battle of the bulge. Many said the problem lies with people themselves.

getreal67: "I agree with part of the article. Americans are getting fatter because they eat more and exercise less. But fixing the problem has nothing to do with redesigning cities or societies. It has everything to do with redesigning one's lifestyle. Some discipline and a treadmill or exercise bike in a basement with a fan blowing is all you need. But instead Americans will continue to spend billions on worthless 'snake oil' trying to find the magic bullet (which by the way does not exist)."

healthagent: "I was overweight and it's tough. I lost a lot and have kept it off with three very simple but actually hard-to-accomplish tasks: 1) Almost no eating out. 2) Watch what I put in the grocery cart. If it's not in the house, I can't eat it. 3) I have a large appetite that's not going away. So I arranged my dinner plate differently - very small portion of meat and very large potion of veggies. I'm still full but with better calories."

readerdrw: "I lost some weight and have gotten sick much less than usual this past year by following three rules that I learned from Michael Pollan: 1) Eat food that is close to its natural state (i.e., corn on the cob is definitely better than high-fructose corn syrup and organic is better than pesticide-laden). 2) Use meat as a condiment, not the main course. 3) Eat as much junk food as you want as long as you make it from scratch. ...  More often than not, I settle for a piece of fruit. When it's worth it to me, I muster up the energy."

There were some commenters who suggested that the kinds of foods Americans eat incline them to become fat.

BrigitC: "Most of us need to eat more high-quality protein, veggies and fruit and less refined carbohydrates. This is a definite prescription for weight loss. You do not need to exercise to lose weight, but of course it helps. The problem is that breads, snack foods and fast food tend to be cheap, requiring no preparation. Combine a sedentary lifestyle, lots of cheap carbs, and lots of stress and you will get fat. This is something I am struggling with as I struggle to pay bills. I'm not making excuses, but our lifestyle and work demands are seriously out of balance in the U.S. Many of us are either seriously overworked or seriously underemployed. It's nice that the first lady gardens and lifts weights, but it would be more helpful if she actually championed vouchers for vegetables and fruits. Every family should get a monthly voucher to purchase produce. This would go a long way to improving health and eating habits."

Opkode: "Spoken like a true liberal. A voucher? You're joking, right?"

Linda34: "I did exactly that two years ago. I stopped drinking all soda in favor of water. I stopped eating any fast food. I eat only high-quality protein, fresh fruits and vegetables and quality whole grain products. I've lost 80 pounds in two years. To you people who think shaming a fat person is valuable - you've got your head up your butts! It only makes us feel worse and want to reach for that bag of cookies."

poly355: "Exercising and eating well is much better than just eating well. Jump rope for 10 minutes or at least take a short jog almost every day."

CityBoy34: "If people ate vegetarian three times a week (yes, all meals, and it's not really that hard) you would see a decrease in weight as well as an increase in energy. It's hard to get off the sofa when all you are eating is high-fructose corn syrup and refined white flour and deep fried foods no matter how delicious it is. Growing up, McDonald's was a monthly treat, if that; we only drank water or low-fat/skim milk, and the occasional juice or diet soda in the fridge. What used to be on occasion has now become the norm for lots of Americans."

Some readers said Americans need to take a tougher stand on weight and obesity.

Xyling: "Removing the shame of being obese by calling it a disease, saying fat is beautiful, generally accepting being unhealthily overweight is certainly supporting our over consumption of calories. Bring back guilt, bring back shame."

For others, being skinny doesn't mean an end to trouble.

cnnmeldrama: "Try being the only in-shape size 4 or 6 woman in an office, church group or PTA meeting with all fluffy (aka: overweight) women. The minute you walk in, they bring up weight, make snide remarks and talk endlessly about weight and food, even though it's the last thing on your mind. Goes to show, for a group that constantly states that size is irrelevant, they are the first to start comparing. Once one of these women told me I was going to he$$ for being petite!"

Frum's assertion that cities should be redesigned to encourage movement got a few nods of agreement.

Bobby56: "It would be great if we made our communities walking and bike-friendly. Trying to cross a road at the light is dangerous. Some of these drivers do not know what a pedestrian is, and right on right doesn't allow them to cut off pedestrians waiting for the walk signal. Walk more, drive less, burn calories and not foreign oil!"

Lynchic: "I agree. There are no 'bike-friendly' roads where I live. Heck, most of the roads aren't even suitable for driving."

CityBoy34: "I have been living in NYC my whole life. I don't even have a permit to drive. I take public transportation only when I cannot walk to my destination. I also eat vegetarian at least three times a week. And when I do eat meat, I get organic at best, and antibiotic all-natural cage-free at worst. Home cooking also helps. Lots of times after preparing a meal, I am not as hungry as when I started."

Comparisons to other countries were made.

olepi: "I noticed on a trip to Paris that I lost 15 pounds in two weeks! Wow, and I ate all kinds of rich food, drank a lot of beer and wine. But I lost a pound every day for two weeks. It was the walking. I used mass transit, meaning you have to walk some blocks before and after the train ride. Just walking around (probably five to 10 miles a day) was enough. No diet changes, no resolutions, no gyms. Just walking."

SuZieCoyote: "It wasn't just the walking. It was access to highly nutritious, non-perverted foods."

olepi: "Actually, the food wasn't it. I already eat real food, don't use salt, etc. No sodas, no cinnamon buns, no McDonald's fat burgers. Diet was approximately the same: eggs for breakfast, meat/potatoes/salad for lunch, and beer/snacks for dinner. My usual."

A few commenters wondered if people are reluctant to exercise because they are concerned about their personal safety.

IliadGirl: "Kids can't just go out and play any more. We used to be out for 10 hours a day, riding bikes, playing in the woods, running from one friend's house to the next. I would go to jail now if I allowed my kids to play without my constant supervision."

Maybe we need to emphasize health more during the day, one reader said.

ckuesper: "We also live in the only country in the world that promotes working 50, 60 or 70 hours a week (or more). It's rare that employees only work 40 hours anymore, thus eating on the go or quick-fix meals become the norm. Unless companies promote healthy lifestyles among their employees by giving them extended lunches to exercise (proactive) instead of 'health care' plans later in life (reactive) we can only expect to continue to see expanded waistlines and increased insurance costs."

Some said it's pointless to blame external forces for people's inability to control their weight.

jady: "I'm a liberal, but I see no point in blaming corporations for our obesity epidemic. Corporations are designed to make money in the same way that water is designed to flow downhill. Whether you want to eat a pound of sugar or a pound of kale, some corporation will find a way to get it to you at as high a profit as possible. If you choose the sugar over the kale, that's both understandable (due to the human palate) and your problem to overcome. Blaming corporations for feeding you what you ask them for is like blaming the sun for your sunburn."

Indeed, a major discussion occurred over what role government plays in the obesity epidemic.

abcdef54321: "If the solution is as simple as eat less and exercise more, then why do so many people find themselves unable to implement that solution. Scolding them for a lack of will power is pointless. If all they had to do is use 'will power' no one would be fat. The problems seem to be: food corporations, food chemistry, addictive ingredients in our food, unhealthy ingredients in our food, food advertising and marketing, deceptive labeling and corruption in the private sector. This will not be solved in our lifetimes."

playfuldream: "Because many people would rather blame society for making it difficult than taking the responsibility for their own bodies. It's easier to do nothing when you think you're not at fault."

The following reader was among those who thought people were overthinking the issue.

easye104: "Just work out and you can generally eat whatever you want as long as you don't binge eat. If you really want that six pack though, you have to watch your diet because it is as important, if not more important, than your workout. However, the debate here is just being overweight. Just get off your lazy butts and get to the gym, or go for a jog, or do some push-ups; it's not hard people. I'm sick of people complaining, or putting up these different diet plans. And you don't have to stop eating carbs to lose weight; that's seriously ridiculous."

But another reader was philosophical.

velkyn: "Why are U.S. citizens getting so fat? Because so many of us are greedy. It's not just for food either. We are greedy for land, for some delusional 'American dream,' where we can have all we want of everything. We think that we 'deserve' everything and that some concept of the leisure class should apply to us too, so we don't have to walk or work with our body and we can have treats every day."

What do you think? How's that weight-loss resolution going? Share your opinion in the comments area below and in the latest stories on CNN.com. Or sound off on video via CNN iReport.