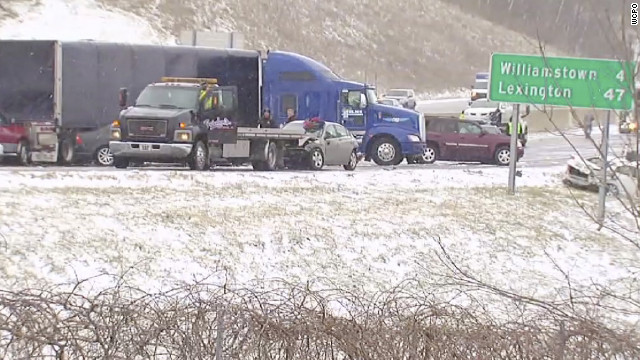 It was the first sign of a winter that had played coy up until then. Weather conditions around the nation emphasized that a new year had indeed begun. Gone were the balmy afternoons and Windbreaker jackets that we needed up until recently. It was the first day back to work for many across the United States - and baby, it’s cold outside at last.

“Cold and blustery conditions are to be expected over much of the Northeastern states with much of the I-95 corridor seeing temperatures in the 20s on Tuesday, while lows plunge well into the teens over this region,” the agency said.

In Tampa, Florida, strawberry farmers hurriedly prepared for the weather’s cold - and cost. Carl Grooms, strawberry grower in Hillsborough County, told Tampa affiliate WFLA-TV a hard freeze had the potential to cripple his crop. “Obviously we got red berries to pick," he said. "We’re going to try to harvest every one of them that we can today and get them to market.”

Grooms told WFLA that he would be especially watchful as temperatures were expected to plunge Tuesday night. “If we go below 32 degrees in the morning and the wind is blowing 15 to 20 mph, that’s a touch-and-go situation of whether you turn your sprinklers on or not,” he told the station.

In Boston, snowfall was far behind where it was last year when several winter storms had already walloped the New England area by New Year's. "These types of slow winters to start are not unusual; it’s just unusual it’s lasting this long,’’ Bill Simpson, a meteorologist at the National Weather Service in Taunton, told The Boston Globe. “There is some hint that it might be changing, but not until the end of the month.’’

But in parts of the Midwest and Northeast, the white stuff was beginning to fall.  In Baltimore, snow was starting to stick to the streets. Fox 8 tweeted a photo of a residential road covered in snow.

In Chicago, city officials unveiled a portal, ChicagoShovels.com, that features a sign-in to help with snow removal, a real-time snow tracker (it “will be activated during a major snow events”) to help residents see where  precipitation is accumulating and various apps for the weather techies out there.