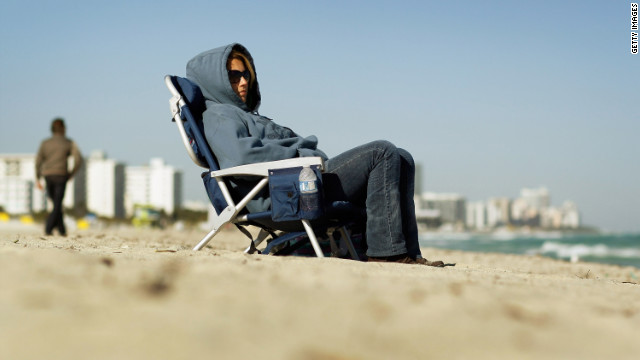 Day of extremes in U.S. weather

Mark down January 4 as one strange day for weather in the United States. The extremes were topsy-turvy.

While Floridians were experiencing record low temperatures, Montanans were seeing record highs that are normal for April or October.

Forecast highs in the upper 50s in Montana were expected to break records in Lewistown, Great Falls, Harve and a handful of other places, according to the National Weather Service.

Similar highs were forecast Wednesday for large portions of Florida.

In Homestead in South Florida, farmers scrambled to protect crops from the damaging cold overnight, CNN affiliate WSVN-TV reported. On Wednesday, they were assessing any possible damage.

"It's not as bad as it could've been. There's still some damage - the extent we don't know yet. With freezes, it's a little difficult. It might take a day or two to really see the effects of it," Miami-Dade Agricultural Manager Charles Lapradd told the station.

In Louisiana, a flood warning was in effect for St. Mary Parish. ‚ÄúDo not drive cars through flooded areas. Remember ‚Ä¶ two feet of rushing water can carry away most vehicles including pickups. Turn around and don‚Äôt drown,‚Äù the weather service said.

Wednesday's extremes extend beyond the contiguous 48 states, too.

Meanwhile in southern Alaska, the weather service warned of dangerous winds with sustained speeds of 35 to 55 mph and gusts up to 85 mph, the strength seen in a Category 1 hurricane.

One thing that's not unexpected is frigid temperatures in Alaska in January, and Bethel, Alaska, near the state's west coast was fulfilling expectations on Wednesday, with a forecast high of 15 below to 20 below zero and wind chills as low as 50 below zero, the weather service said.

Those flight patterns the Hurricane Hunters follow may look like boxes or stars, but they serve specific purposes f‚Ätwitter.com/i/web/status/1‚Ä¶Hq
CNNweather

8:33 am ET September 19, 2021 RETWEET
Animals are getting larger beaks, legs and ears that allow them to better regulate their body temperatures as the p‚Ätwitter.com/i/web/status/1‚Ä¶xE
cnni