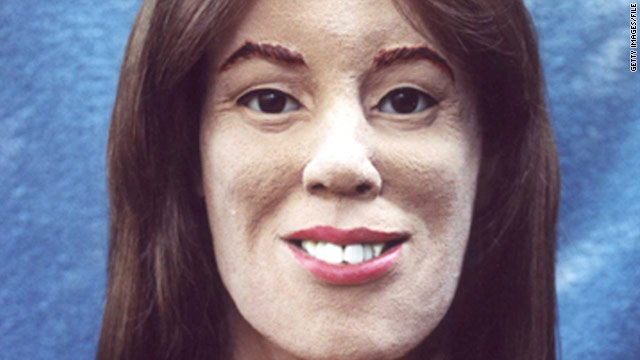 Police use composites, like this from a 1969 California murder victim, to ID remains, but some jurisdictions are taking it further.
January 4th, 2012
01:56 PM ET

Milwaukee hopes images of dead can heat up cold cases

The Milwaukee County Medical Examiner's Office is taking a drastic and admittedly desperate step in its effort to clear cold cases, some stretching back to 1970.

Law enforcement officials have long posted sketches or clay models  - and more recently, digital reconstructions - of unidentified persons in hopes that a friend or loved one might recognize the deceased and help police identify them. Taking its lead from Las Vegas, Milwaukee County is taking it a step further and releasing actual photos of the deceased.

It sounds gruesome - and it is, if you peruse the Milwaukee medical examiner's unidentified persons site - but forensic investigator Michael Simley says that in the 17 cases featured, authorities have run out of options.

"They were born with a name, and they deserve to have that name in death," Simley said. "This is the best way to get that information out there to the public."

Just because bodies are found in Milwaukee County doesn't mean the deceased lived there. They may have been a homeless transient or perhaps a visitor, so Simley wanted to create a database anyone could search.

It's a twist on the U.S. Justice Department's NamUs system, which is a database of unidentified human remains. The database, which contains more than 8,000 cases, is searchable by sex, race, body features, dental information or other characteristics.

There are many systems like NamUs. The Georgia Bureau of Investigation, South Carolina Coroner's Association, New York State Police, Texas Department of Public Safety and even the Royal Canadian Mounted Police are among the law enforcement entities that post their John and Jane Does online, but they rely on reproductions of the deceased.

Milwaukee and Las Vegas appear to be the only U.S. cities whose police are posting photos of the actual bodies. The University of Milan in Italy, via its Laboratory of Forensic Anthropology and Odontology, also maintains a website that uses actual photos.

A news release from the Clark County, Nevada, Office of the Coroner/Medical Examiner states that since 2003, when it launched its own website and designated a group of investigators to handle cold cases, it has identified the remains of 30 people. The site says 152 remain to be identified, the oldest case dating back to 1969.

Milwaukee's site has yet to yield any identifications, but Simley noted it has only been live for a few weeks.

Simley knew the Milwaukee venture "may not sit well with some people," he said, so he took great care in how he arranged the site, putting up two pages of graphic content warnings before a visitor can view photos of the deceased. He decided the actual photos were a necessity after considering that all other leads in these cases had been exhausted and that sketches and clay composites can sometimes be inaccurate.

"Nothing quite describes a face like a picture of a face," he said.

Between their day-to-day duties, Simley and fellow forensic investigator Genevieve Penn in 2009 began importing the unidentified victims, which include adults, infants and fetuses, into a system.

For some victims, there were no photos available. For others, the face was so badly decomposed that investigators had to rely on other photos, like those of tattoos or belongings found with the corpse. There were also a few photos which required delicate doctoring to make them less grotesque yet still recognizable.

Simley began working on the website early last year, and it launched last month. So far, he said, there's been no negative feedback aside from one news report quoting an anthropologist who felt it would be traumatic for family members to see the photos.

Simley respects the opinion, but noted that protocol doesn't allow a loved one to identify a body via a composite, so at some point in the identification process, friends and family members will have to see the actual remains or at least a photograph.

In short, he said, the Milwaukee County Medical Examiner's Office understands these are sensitive matters, but is placing the identification of Jane and John Does on "a slightly higher bar" than the public's potential squeamishness.

"It's tragic to family members to have that in the back of their mind every day, wondering where their loved one is," he said.