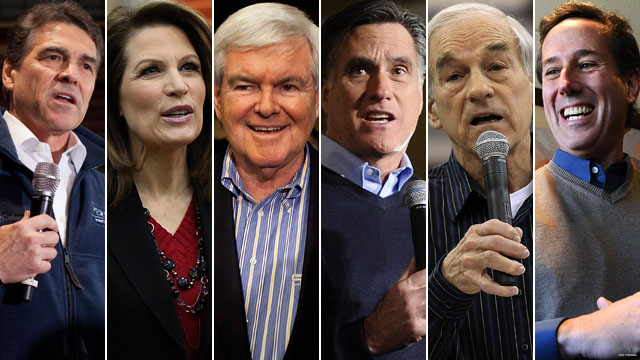 The very close result of the Iowa caucuses got a lot of readers talking about the Republican Party's strategy.
January 4th, 2012
02:53 PM ET

Overheard on CNN.com: Who will lead GOP after indecisive Iowa caucuses?

By a slim margin of just eight votes, Mitt Romney came out ahead of Rick Santorum and Ron Paul in the Iowa caucuses. It was a historic result, and commenters had lots to say as they tried to identify the trajectory of the Republican Party.

5 things we learned from the Iowa caucuses

Some readers said the result reflected poorly on Romney, despite his win.

lesfender: "Hardly a win for Romney. He basically did the same as last go around. Santorum should be considered the true winner, with Ron Paul second. He doubled his turn out from last time around. Romney, while I believe will be the final choice, is hardly a winner.

DJRickyV: "Between a candidate Romney and incumbent Obama, I see a close race but Obama by a nose. Romney has some compelling ideas but still has to find something in his record that trumps that outsourcing albatross."

Lots of commenters were abuzz about Ron Paul's finish in the top three, whether supporting or opposing.

CouchPatato: "Ron Paul finished a distant third, that means all his supporters will shut up now, right?"

thewiser: "It wasnt 'distant' and all three got six delegates each. Its an essential tie."

Readers wondered if Santorum would be able to surge all the way.

skitownrefug: "[Tim] Pawlenty was a born again loser and didn't have the heart or guts to stick it out – but that was evident from the start. He didn't win a straw poll so he dropped out. What kind of president would he have made, I ask you? I don't like Santorum or agree with his political views, but you've got to give the guy lots of credit for sticking to what he believes and having the guts to tough it out."

kevin1245: "Santorum didn't do anything to get the votes, he was just the last flavor of the week. As soon as the ads start coming out about him, he will be left in the dust by Paul and Romney."

JustTruth1: "The biggest thing we learned from the Iowa Republican caucus is that they gave their votes and their approval to a 'liberal' candidate."

Readers said they learned a few things beyond the list that was given. Some even wrote their own top five.

PotatoMash: "5 Things we learned from Iowa: 1) Iowans don't listen to the media 2) Negative campaigns work though we all complain about them 3) People vote for the hottest ember at that moment of voting 4) The Republican candidates are so-so 5) Michele Bachmann is living in la-la land."

psgmichigan: "Five things I learned from Iowa. 1. Election controlled by ultra-conservatives, 2. Candidates have to buy votes, 3. They finally wised up after their winning straw vote for Bachman, 4. Too much media coverage. 5. They have lots of coffee shops."

Some of the conversation was about voting and the caucus itself.

CactusThorn: "We continued to learn the presidential campaigns are WAY too long. Should be limited to six months prior to the election."

Duckyducky: "We learned that caucaus are a bunch of crap and should be illegal. If a state can't let people vote for a person at the ballot box they should be dropped from the registers."

DrTrollworth: "I hope the political campaigns in the U.S. last for many many months and expend billions of dollars. I want to see all the political commercials that talk about the candidates and how the other candidates are bad. They are always so accurate and clearly not biased or filled with half-truths. Could someone record them all and post them on YouTube?"

A few readers said they didn't like the GOP candidates, but didn't want to vote for President Obama, either.

roseydosey: "What we learned is we are stuck with one of these candidates if we want to dethrone Obama. He's here to stay - the party will endorse him no matter what. Even if it looks like the GOP can win, which it probably can't given these candidates. None have charisma that is a requirement of a presidential candidate. None seems in 'control' of their situations. It is too bad that Hillary Clinton can't change parties and run as a GOP candidate as I believe she would win given her strength, charisma, knowledge of the situation at home in the USA and abroad (foreign affairs). She'd be working to get the job DONE within the 4 years allotted and not waste the last 18 months of her presidency on a bid for the next election."

A good night for Romney

CNN's story said Romney had a good outcome, but a sizeable majority of our commenters, from all political persuasions, said the slim vote result was a sign that the Republicans have failed to come up with a compelling candidate. Here's one conversation we saw:

Vadeakon: "Iowa speaks,'None of the above.' "

bettyboop33: "That is exactly what the American voters will say in November 2012 and President Obama will indeed be re-elected. Can I get an Amen? lol"

Dhamre: "Is it possible that the GOP know that they are going to lose this race and therefore are letting the worst candidates go forward? That way they can save their electable ones for 2016?"

inthebuff: "Iowa speaks, 'Anybody but Obama!' "

What's next for the GOP? That's on the minds of many. Readers further analyzed the results.

BJJSchecter: "And Iowa fades back into obscurity. That's the shame of this circus. None of these clowns will give Iowa another look."

23drums: "It's amazing how much the fact that Romney is a Mormon affects the numbers of votes he gets from Christians. How sad!"

Vittlez151: "All I’m going to say is that if I had it my way, between Mr. Santorum and Romney, I pick Mr. Santorum because Romney’s face, expression and look very evil and diabolical ... but that’s just me ..."

Guest: "The only real race in NH is to see who will take second and whether Romney falls below 40%. Romney's failure to win Iowa by more than 8 votes over someone who was in single digits two weeks ago means he needs a HUGE win in NH. He won't get it in SC and most likely will lose Florida too. 75% of the GOP just don't want him."

NHWoman: "The candidate who has spent the most attention on us is Ron Paul. Gingrich is second. Just this past week I got glossy postcards from Romney that don't say much. Nothing from Santorum. So in terms of name recognition alone, I would say that more New Hampshire voters, especially young voters, know Paul and his positions than those of anyone else."