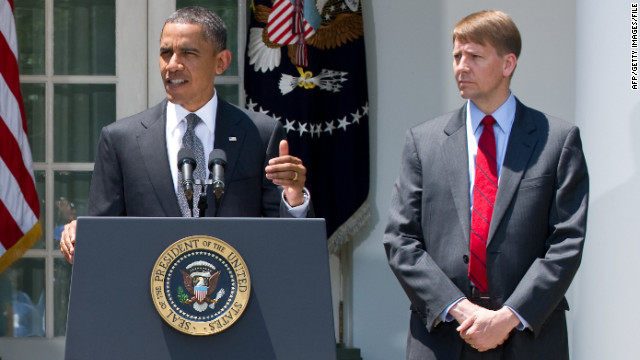 President Obama sparked controversy with his appointment of Richard Cordray to the Consumer Financial Protection Bureau.
January 6th, 2012
08:26 AM ET

Three stories to know about Friday:

Obama addresses Consumer Financial Protection Bureau after controversial appointment - U.S. President Barack Obama is scheduled to make remarks at the new Consumer Financial Protection Bureau in Washington on Friday, just days after he decided to make a recess appointment of Richard Cordray to head the agency - a move protested by congressional Republicans.

Republicans say the move was unconstitutional because the Senate technically has met every three or four days over the holiday period and therefore was not in recess.

However, Senate Democrats defended the appointment, arguing the president's constitutional authority to fill top government posts outweighed whether Congress was technically in session or not. At issue is a disagreement over the meaning of the term "recess." The Constitution states the president can make recess appointments but fails to dictate how long a recess is. Legal experts have debated the point for years.

With a recess appointment, Cordray can serve through the end of 2013. Republicans had vowed since May to block confirmation of any director unless they get structural changes to the bureau, which was formed as part of the Wall Street reform law passed last year.

Van der Sloot murder trial in Peru - The Dutch man charged with killing a 21-year-old woman in a Peru hotel room last year is expected to plead guilty Friday to all charges against him, his attorney told CNN.

The initial plan was for Joran van der Sloot to admit to killing Stephany Flores in May 2010 while fighting more stringent charges that could land him additional time in prison, attorney Luis Jimenez said.

The murder trial was set to start Friday in Lima. Jimenez said the intention of the new strategy is to give a "sincere confession," which under Peruvian law can qualify his client for a more lenient sentence.

About 6 1/2 years ago, van der Sloot was considered the prime suspect in the case of Alabama teenager Natalee Holloway, who vanished while on a graduation trip to the Caribbean island of Aruba. He was arrested twice but never charged in connection with Holloway's disappearance, which remains unsolved.

The report is expected to show 150,000 jobs were created in December. The Labor Department also is scheduled to revise its data back for the last five years - and many economists are expecting it will show job growth was stronger than initially reported in the last few months of 2011.

Economists surveyed by CNNMoney expect the jobs report will show the private sector added 170,000 jobs in December, while the government cut 20,000 jobs - for a net gain of 150,000.

Economists are also forecasting the unemployment rate ticked up to 8.7% from 8.6% in November, mainly due to discouraged workers - who had previously given up their job searches - re-entering the labor force.

The United States will give Ukraine an additional $215 million in emergency food assistance to help the country batŌĆtwitter.com/i/web/status/1ŌĆ”s9
cnni

8:15 pm ET May 18, 2022 RETWEET
The coin, which will not enter circulation, was designed by London artist, writer and LGBTQ+ activist Dominique HolŌĆtwitter.com/i/web/status/1ŌĆ”zd
cnni

The United States will give Ukraine an additional $215 million in emergency food assistance to help the country batŌĆtwitter.com/i/web/status/1ŌĆ”s9
cnni

8:15 pm ET May 18, 2022 RETWEET
The coin, which will not enter circulation, was designed by London artist, writer and LGBTQ+ activist Dominique HolŌĆtwitter.com/i/web/status/1ŌĆ”zd
cnni