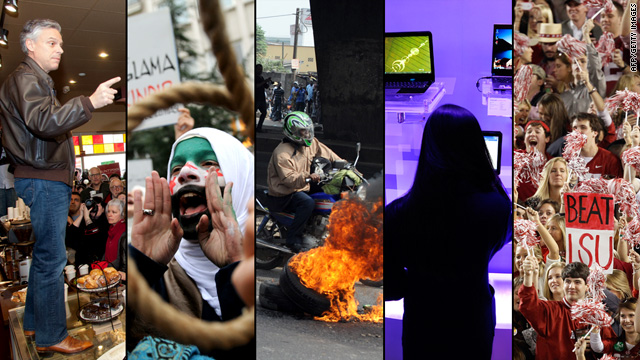 Polls show Romney ahead as New Hampshire prepares to vote

A slimmer field of GOP presidential candidates is fighting for votes in Tuesday's New Hampshire primary, the second contest of the 2012 nomination calendar.

Mitt Romney, a former governor of neighboring Massachusetts, had a double-digit lead in Granite State polls less than a week after he pulled out an eight-vote victory over former U.S. Sen. Rick Santorum in the Iowa caucuses.

Six major candidates are still in play, with U.S. Rep. Michele Bachmann of Minnesota having suspended her campaign after a poor showing in Iowa.

Romney's rivals had heated exchanges with him in a debate in New Hampshire on Sunday, the second debate there in two days.

Arab League expected to beef up monitoring mission in Syria

Amid a growing international outcry over unrest that has killed thousands in Syria, the Arab League is expected to consider sending more observers into the nation this week, a senior adviser to the Arab League chief said.

Opposition figures say government-backed security forces have, starting in mid-March, been cracking down on protesters calling for Syria's president to step down. The Arab League is on a fact-finding mission in the nation, part of a larger initiative to end the violence. Death estimates range between 5,000 and 6,000.

While the Arab League's observers in Syria - 165 as of last week - do not have a mandate for peacekeeping or to stop the conflict, they are tasked with verifying Syria complies with the four points for the Arab League action plan. Those points are: release detainees, allow the presence of media and other observers, halt the violence and pull heavy equipment off the streets.

Trade unions in Nigeria have called for a general strike and mass protests Monday if the government doesn't reverse a decision that prompted gas prices to more than double last week.

Nigeria already has seen a wave of protests since gas prices jumped after the Nigerian government took away fuel subsidies on January 1. Two labor groupsÂ urged the government to restore the subsidies, saying the country would grind to a halt starting Monday if subsidies weren't restored.

The cost of a liter of gasoline shot up from 65 naira (40 cents) to at least 141 naira (86 cents) almost overnight after the subsidies were removed.

The government says it believes the removal of fuel subsidies will help the country's economy. It argues the money saved will be used to invest elsewhere, such as in refineries.Â Despite being one of Africa's largest oil producers, Nigeria - a country of 167 million people - has no functioning refineries and has to import fuel.

The protests come as Nigeria also is dealing with a spate of attacks - many claimed by or blamed on a militant Islamist group - against Christians. At least two dozen people were reported killed over a three-day period last week alone.

A Dutch man charged with killing a Peruvian woman is expected to enter a plea on Wednesday, five days after his trial in Peru was delayed when he asked for more time to consider what plea he would give.

Joran van der Sloot's attorney said last week that van der Sloot was going to Â plead guilty to all charges, but when it came time to tell the court, he asked instead for more time.

Van der Sloot is charged with "qualified murder" and simple robbery in the 2010 killing of 21-year-old Stephany Flores in a hotel in Lima, Peru.

He had been considered the prime suspect in the case of Alabama teenager Natalee Holloway, who vanished in 2005 while on a graduation trip to the Caribbean island of Aruba. Van der Sloot was arrested twice but never charged in connection with Holloway's disappearance, which still is unsolved.

The latest in tech on display at Consumer Electronics Show

Thinner, lighter and more refined versions of popular gadgets are among the new tech offerings that are expected to debut at this week's Consumer Electronics Show in Las Vegas.

The show is an annual gadget convention where the likes of the compact disc player and high-definition television debuted. CNN's Mark Milian previews what the show might produce, including thinner tablets and laptops, new apps and cars that are more connected to cyberspace.

College football's national champion will be determined by the outcome of Monday night's game between the top-ranked Louisiana State University Tigers and No. 2 University of Alabama Crimson Tide.

LSU brings a 13-0 record into the game, having defeated Alabama 9-6 in overtime in a tense Southeastern Conference match-up on November 5. Alabama (11-1), playing at home in Tuscaloosa, missed four field goals that day, including one in overtime.

Alabama is looking to redeem itself in the rematch as both teams bring powerful offenses and stingy defenses into the Superdome in New Orleans. The game is at 8:30 p.m. ET on ESPN.

Alan Bryant cooks $44 steaks for Atlanta's well-to-do while his wife picks up food from a pantry. They were once in the middle class. Now their lives embody the nation's rich-poor gap.

This story won't be featured on CNN.com's home page until Monday, but you can get a sneak peek here.