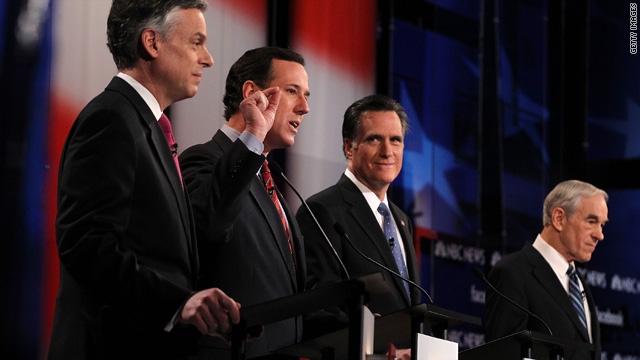 CNN's Truth Squad fact-checked some of the claims made at Sunday's Republican presidential debate in Concord, New Hampshire. We'll take a look at some of the questions posed to the candidates, then share with you how they answered the question.

Mitt Romney said more jobs were created in Massachusetts while he was governor than have been created in the United States since Obama has been president.

The statement: "We created more jobs in Massachusetts than Barack Obama's created in the entire country."

Gingrich: EPA out of touch with reality

Former House Speaker Newt Gingrich said the Environmental Protection Agency considered regulations that would punish farmers for allowing dust from their fields to blow onto other farmers' fields.

The statement: "They were worried that the plowing of a cornfield would leave dust to go to another farmer's cornfield. ... They were planning to issue a regulation. In Arizona, they went in on the dust regulation and suggested to them that maybe if they watered down the earth, they wouldn't have these dust storms in the middle of the year. And people said to them, 'You know, the reason it's called a desert is there's no water.' Now this is an agency out of touch with reality, which I believe is incorrigible, and you need a new agency that is practical, has common sense, uses economic factors and, in the case [of] pollution, actually incentives change, doesn't just punish it."

#GeorgeFloydâ€™s brother Philonise after the verdict called out to Emmett Tillâ€™s family saying he â€œwas the first twitter.com/i/web/status/1â€¦rO5VioX3
sarasidnerCNN

6:26 pm ET April 20, 2021 RETWEET
The family of #georgefloyd and their their attorneys walks in to press conference chanting â€œsay his name. George Fltwitter.com/i/web/status/1â€¦qhgN
sarasidnerCNN