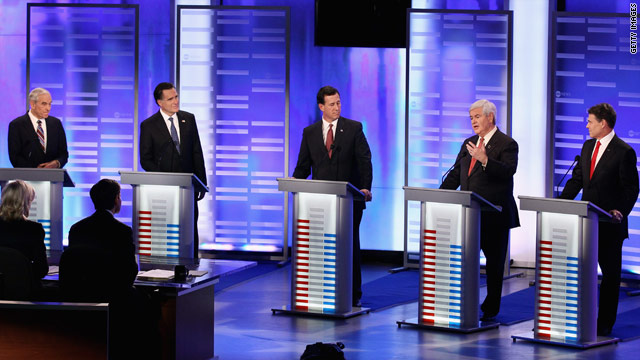 CNN's Truth Squad fact-checked some of the claims made at Saturday night's Republican presidential debate in Manchester, New Hampshire. We'll take a look at some of the questions posed to the candidates, then share with you how they answered the question.

The statement: "He's a big government, big spending individual because, you know, he preached to the fact he wanted a balanced budget amendment, but voted to raise the debt five times." - Ron Paul.

The statement: "He tacitly supported the results of the election. (President Mahmoud) Ahmadinejad announced right after the election polls were closed, he won with 60-some percent of the vote and the president said that sounds like a legitimate election."- Rick Santorum.

Was Gingrich eligible for the draft?

Rep. Ron Paul challenged Newt Gingrich on whether or not he asked for a deferment during the Vietnam War. "I think people who don't serve when they could and they get three or four or even five deferments aren't - they have no right to send our kids off to war and not be even against the wars we have," Ron Paul said.

The statement: "The fact is, I never asked for deferment. I was married with a child. It was never a question." – Newt Gingrich