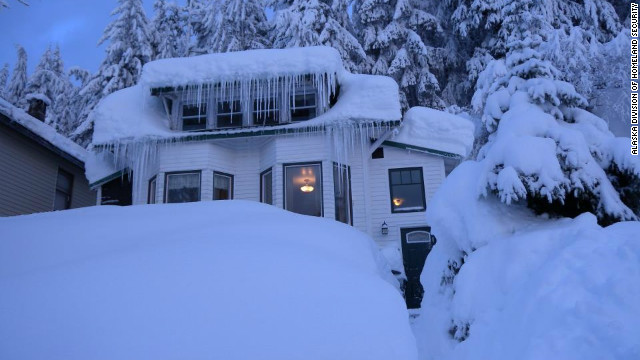 Snow in Alaska doesn't usually make big headlines, but even The Last Frontier has extremes.

Cordova, an isolated coastal town of about 2,000 people about 150 miles east of Anchorage, appears to be one of the hardest-hit locales, with the state National Guard reporting that it was sending Guardsmen and resources Monday after weeks of record snowfall left the city¬Ý buried under 18 feet of the white stuff.

The state activated its State Emergency Operations Center on Friday to help Cordova handle the snow. The town had issued a disaster declaration earlier in the day.

Cordova is "isolated off the state highway system," according to the Guard, and the sea and airport are the only way in and out of the area. The National Guard sent resources to Cordova as conditions worsened and residents scrambled to dig themselves out Monday.

‚ÄúCordova is continuing their outstanding job responding to several weeks of intense snowfall,‚Äù John Madden, director of the Alaska Division of Homeland Security and Emergency Management, said in a statement. ‚ÄúCordova utilized all of their snow management resources to maintain emergency access but now face a new round of storms that will bring heavy snow and perhaps rain.‚Äù

The most recent storm alone brought 42 inches of snow to the town, according to a news release from the state Department of Military and Veterans Affairs.

Photos from state agencies showed entire homes buried under snowdrifts and workers removing snow - 4 to 5 feet high in some places - from rooftops. The National Weather Service office in Alaska and the state Division of Homeland Security and Emergency Management had myriad storm pictures on their Facebook pages.

Though some buildings have collapsed under the weight of snow, Cordova issued a news release saying that no homes had been damaged in a recent avalanche and that a major highway had been reopened, but schools remained closed Monday. The news release warned residents that conditions were "treacherous" and advised against any unnecessary travel that would impede the work of snow removal and safety crews.

With 39 inches in November and 82 inches last month, according to the Cordova Electric Cooperative, residents told the local newspaper that they haven't seen this much snow since the 1970s. One woman told a reporter from The Cordova Times that she began sobbing uncontrollably over the sight of more snow last week.

The roofs of buildings were submerged, businesses were seeing only a handful of customers, the beeping sounds from heavy equipment can be heard day and night, youngsters were making money shoveling out businesses and residents, and there was a rumor that a front-end loader had picked up a Subaru, the paper reported.

Though Cordova appeared to be facing the brunt of Mother Nature this week, various other parts of Alaska have seen record temperatures, precipitation and snowfall in the last week:

- Nome's Tuesday and Wednesday temperatures of -37 and -38 both broke decades-old records. On Monday, there was news that a U.S. Coast Guard cutter was helping a Russian tanker smash through ice up to 4 feet thick to deliver fuel to the iced-in locale.

- Cold Bay had 3.1 inches of snow on Wednesday alone.

- The temperature in St. Paul reached a record 0 on Saturday.

- Record precipitation was recorded Sunday at the Haines and Juneau airports.

- Fairbanks reported Monday that it had experienced snow every day for 22 consecutive days.

- The Anchorage Daily News reports that the city's average snowfall each winter is 74.5 inches. As of Friday, it had already seen 70 inches.

"I certainly learned about the condition more than I wanted to learn." cnn.it/3fijWP3
cnni

8:15 am ET September 25, 2022 RETWEET
Tropical Storm Ian is forecast to rapidly intensify as it barrels through the Caribbean and the Gulf of Mexico befo‚Ätwitter.com/i/web/status/1‚Ä¶24
CNNweather

8:01 am ET September 25, 2022 RETWEET
Rafael Nadal has withdrawn from the remainder of the Laver Cup due to personal reasons, after partnering with his l‚Ätwitter.com/i/web/status/1‚Ä¶8X
cnni

"I certainly learned about the condition more than I wanted to learn." cnn.it/3fijWP3
cnni

8:15 am ET September 25, 2022 RETWEET
Tropical Storm Ian is forecast to rapidly intensify as it barrels through the Caribbean and the Gulf of Mexico befo‚Ätwitter.com/i/web/status/1‚Ä¶24
CNNweather

8:01 am ET September 25, 2022 RETWEET
Rafael Nadal has withdrawn from the remainder of the Laver Cup due to personal reasons, after partnering with his l‚Ätwitter.com/i/web/status/1‚Ä¶8X
cnni