Danish soccer star Christian Eriksen has had a "successful operation" and was discharged from a hospital less thanâ€twitter.com/i/web/status/1â€¦9i 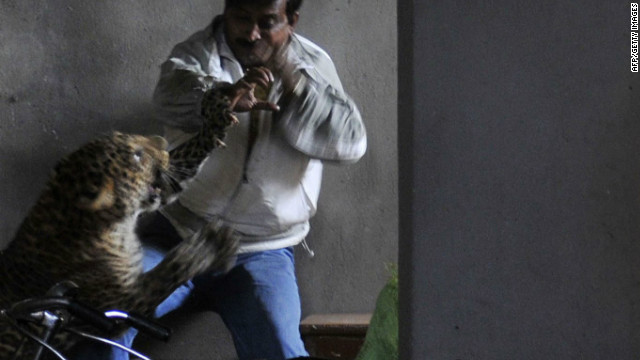 Leopard released into reserve after killing one, injuring two

A leopard whose urban-area attack led to the death of one man and injuries to two others was released in an Indian nature reserve on Monday, two days after the incident.

Officials from the Assam State Zoo in Guwanhati, where the attacks occurred, set the cat free in in a tiger reserve in Manas, according to an Agence-France Presse report in the Hindustan Times.

Three men were attacked on Saturday when the cat wandered in to a residential area of Guwanhati, a city of almost 1 million people in northeast India.

The dead man was Debo Kumar Das, an attorney who was doing carpentry work in his house when he was attacked, according to a report in The Times of India.

"The leopard clawed him, wounding his head. Das received stitches on his head at a hospital and returned home in the evening. When we went to check on his health in the morning, we found him dead. There were blood stains everywhere in the room," the Times quoted a neighbor as saying.

One of the leopard's victims, Pintu Dey, told AFP from his hospital bed that he was injured as he tried to protect the cat from police who had come to kill it.

"My two children were inside the house and so I went to save them when I found some policemen aiming to shoot the leopard," AFP quoted him as saying. "I pleaded against killing the cat and literally stood between the policemen and the leopard like a shield, and all of a sudden I found myself attacked and blood splattered all over."

The attack on Dey was captured on photographs.

The cat was later tranquilized and taken to the local zoo.

Surajit Dutta, director of the Kaziranga National Park, told The Telegraph of Calcutta, that a large crowd that came to look at the leopard worsened the situation.

â€śYou traumatize an animal like this and it will attack. You let it pass, while informing us, and it normally will. We can then get the situation under control as our people are trained to do this,â€ť he said.

More attacks by leopards on humans can be expected as populations grow and move into lands where the animals hunt, Dutta told The Telegraph.

â€śLeopards may even like city life given the ready access to chicken, dogs, cats and other pets in human habitation. Unlike tigers, they take easily to disturbed habitats. Unlike the tiger, which prefers thick forests, solitude and privacy, thereby staying elusive, the leopard takes easily to scrubland, which Guwahati creates as its ever-growing population tears into its forest cover. Guwahatiâ€™s forests and scrubland are full of leopards,â€ť Dutta is quoted as saying.

Danish soccer star Christian Eriksen has had a "successful operation" and was discharged from a hospital less thanâ€twitter.com/i/web/status/1â€¦uR
cnni

1:12 pm ET June 18, 2021 RETWEET
One of the world's largest diamonds has been unearthed in Botswana, the country's government has announcedâ€twitter.com/i/web/status/1â€¦kA
cnni

12:30 pm ET June 18, 2021 RETWEET
Canada has extended its Covid-19 restrictions on nonessential international and US travel until July 21, accordingâ€twitter.com/i/web/status/1â€¦GK
cnni