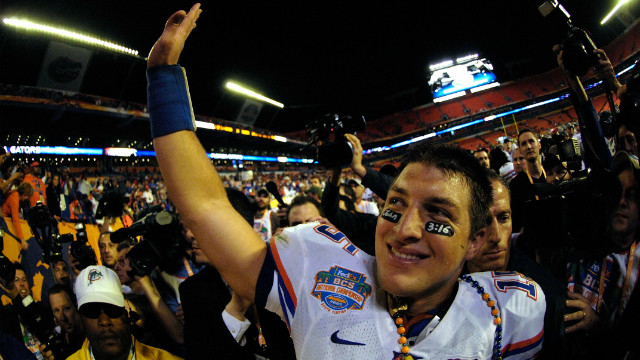 Tim Tebow celebrates as he walks off the field after his Florida Gators won the BCS National Championship game on January 8, 2009. In the black below Tebow's eyes, John 3:16.
January 9th, 2012
08:54 AM ET

Early Monday morning, the top item on Google Trends hot searches is John 3 16, the passage from the bible that reads:

"For God so loved the world that he gave his one and only Son, that whoever believes in him shall not perish but have eternal life."

The number two and three searched terms on Google? Tebow and Tim Tebow.

It's surely all coincidence, but how many yards did Tebow throw for as he led the Denver Broncos to a 29-23 overtime win over the Pittsburgh Steelers in the NFL's divisional playoffs on Sunday night?

And what did Tebow have on his eye black as he led the Florida Gators to victory in the 2009 national championship game three years ago to the day of his performance in Denver Sunday night?

And while were looking at numbers, let's look at dates, like December 25, the birth date of Jesus Christ and the man who caught Tebow's overtime pass and scored the winning touchdown Sunday night, 24-year-old Broncos wide receiver Demaryius Thomas.

In the next round of the NFL playoffs, Tebow, Thomas and their Broncos travel to New England to face the Patriots, a team that dominated them in Denver late in the regular season. The Patriots figure to be even bigger favorites than the Steelers were to defeat the Broncos Sunday night.

But don't count out Tim Tebow to produce some amazing numbers of his own.

Check out Time.com's gallery of John 3:16 in popular culture, including Tebow as a Florida Gator.