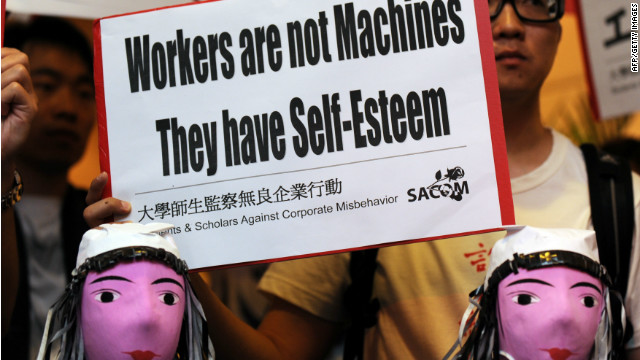 Overheard on CNN.com: U.S. companies too dependent on overseas manufacture?

The issue of foreign labor, outsourcing and "buying American" bubbles up on CNN.com from time to time, and almost always leads to a fascinating discussion about the economics and ethics of overseas manufacture. Protests over pay (and a threat of mass suicide) at a plant that makes Microsoft's Xbox game systems re-ignited the debate over work conditions in foreign factories. Chinese contractor Foxconn, the plant owner, makes brand-name electronics for Apple, Dell, Hewlett-Packard, Sony and Microsoft.

Our readers wondered whether it would be possible to sustain the U.S. economy on entirely American-made goods. The most-liked comment started a huge discussion thread.

28Mamerican: "Here is a novel idea, manufacture products of American products in America."

Shown here are some of the replies, which themselves were quite a discussion. One of the most common things noted was that items would be a lot more expensive if they weren't made in China and other places overseas.

gstangler: "Nice try, but the workers here don't want to work for the price the companies need to make it worth their time to develop and market. Convince the uneducated working in America that the $20-per-hour union overpaid positions are no longer acceptable, and you'll see the factories return."

ibivibiv: "You know an Xbox wouldn't be $1,000 if the @#$%heads in charge stopped pigging down multimillion-dollar bonuses while people in China were so desperate they want to kill themselves and people in the United States can't even find a job to kill themselves over. It's going to be awesome to watch them try to fly their jets around when all of that paper with presidents on the front these corporate d-bags have amassed is worthless. Xboxes would cost $1,000 to support some jerk's ridiculous lifestyle, not some factory worker's paycheck."

drowlord: "You guys are delusional to think that there's a 15%-20% price difference between a labor-intensive product made in China compared with one made in the United States. There's a 3,000% difference in the cost of labor.

whiskeylover: "Microsoft could close the plant and bring the jobs back to the United States. But there is a problem with this. 1) Either the cost of an Xbox would increase 100%, in which case you'd still be complaining or 2) Microsoft would have to eat the cost of doing business, which would be illegal since the company has a legal obligation to try to maximize profits for its shareholders."

There were a lot of repliers to this same thread who placed responsibility on consumers.

Vagabond8: "I love this idea, too. The problem is if you take a product made in China, and one that sells for 15-20% more that was made in the USA, the consumer almost always goes for the cheaper option. We only have ourselves to blame on this one."

ReligiousGuy: "Those who are ready to pay more to buy American-made goods, please provide proof that you are not buying anything that is imported. You get clothes, gas, automobiles, household items, etc. that are 100% american? And that's all that you buy?"

MovingFWD: "I would rather pay more than destroy my own country."

MikkyH: "As long as you are prepared to pay more for said products, then it can realistically happen."

Also on this thread, commenter ibivibiv said they have observed cases in which an American-made product is cost-effective.

ibivibiv: "I have another great example of how to torpedo your false assumptions about price differentials in products made here in the United States and China and where the profits are going. Go to your local Sears store. Go to the tools. Find the Craftsman tools. Now look on the rack, there you will find packages of specific tools that look identical. After closer inspection, you will note that some packages (the older ones) have a small "Made in the USA" logo. There will also be newer stock identical items that say "Made in China" in small print. Notice that the price is the same for both products. So tell me one more time how making a product in China means we get it cheaper here? Methinks someone is keeping all the money and totally BS'ing all of you into thinking they would have to raise the price of things. Wake up and start demanding U.S. products."

Finally, there were some readers who said we ought to rethink our attitudes about China.

AmitAtlanta: "Foxconn, who makes products for Dell, Hewlett-Packard and Sony, employed 800,000 employees in China in October 2010. And we talk about creating a few hundred jobs all over the country every so often! Can we be more stupid?"

RobertOKUSA: "It was only a matter of time until the Chinese labor movement reached the point where the American labor movement was at the end of the 'Robber Baron' era 100 years ago."

In another thread, the commenters talked about future threats to jobs. But as above, there were plenty of people who said it isn't practical to expect not to have immigrants working in the United States.

IanA1: "Just wait until engineering goes. If you think you're special and worth $55,000+/year when up-and-coming Chinese and Indian engineers can be had for $10,000/year in a country with no labor laws, you are in for a painful surprise at how you are no different than the working-class guy who has been getting bent over for the last 20 years. Don't expect much sympathy in the process, either."

MarkBDC: "Yes, but please keep illegal scientists and entrepreneurs out of USA. That will save us, let them go to China and India where they get visas and incentives."

Another set of responses blasted American consumers for causing outsourcing.

Pagan2012: "Corporations are not the traitors of this country. Americans who purchase things made in China are the traitors. We want our goods cheap, and when given the choice to buy a more expensive American good or a more cheap Chinese good, we choose to pay for the Chinese item. It is Americans who create the demand, not corporations. Do you want cheap goods made here in the United States? Put all our prisoners to work! Round up the murderers, the pedophiles, the drug dealers, the rapists etc. and make them work for their meals. Give them a cell with a hook and a rope. If they want to kill themselves, then let them. If they want to live, then make them produce cheaply made goods. They chose to not be citizens of a democratic republic the moment they chose to commit a horrendous crime against American citizens. They are only as useful to our society as we make them. Iran is not the biggest threat to America, China is. Fundamentalist religious attitudes and communism each vie for the top position of everything that our Founding Fathers fought against. In purchasing goods that are made in any country that violates human rights, we support that ideology plain and simple."

ImInLine: "Wrong, I'd pay a little extra for American-made, but all American companies have them made in China. ... If given a choice, I'll go with American ... so yeah, it's the corporations who are the traitors."

sandman416: "What is worse is the U.S. companies that shipped manufacturing to China. I look at boxes of things I used to buy and now they say made in China. I put it back if I can find something American-made or ask myself, do I really need it?

Is the quality of American-made products better? What do you think?

fleetingfree: "As for USA manufacturing, I save a lot of money by buying clothes from the USA that don't fall apart in a month like that garbage from China in Wal-Mart. It may cost twice what Wal-Mart does, but it lasts 10 times longer."

The story talks about Microsoft in particular responding to the mass suicide threat. Some readers were hard on the computer company, while others said the Chinese companies must take responsibility for their workers.

SirKris3: "Microsoft shouldn't act surprised. This is what happens when you outsource jobs to a foreign sweatshop that imploys virtual slave labor to keep costs down."

Artexerxses: "You should understand parallel metaphors. It is the management at those factories that must get nailed, not the client contribution. If China raises its price, then perhaps Americans will use American factories and the Chinese will still use their own factories.

Leapfrogging from Artexerxses' point, what would American companies do if Chinese products became more expensive? Here's one conversation about that. Some readers said there is a near-endless supply of that kind of labor in other places.

Teriander2: "The Chinese are getting smart. They're realizing they have rights. Soon they are going to start demanding retirement plans and 401(k). Then American companies will have no choice but to return to American labor. Go Chinese!!"

alientech: "American corporations will find cheap and quiet labor somewhere else until they run out of semi-slaves willing to work for them."

Or is the profit margin what determines whether manufacturing is sent overseas? Could increasing profit by outsourcing actually lead to more jobs? There appeared to be different schools of thought among our readers.

THDUDEABlDES: "Don't you people get it? They could easily manufacture these products here if corporations didn't require such high profit margins of themselves. So the CEOs drive a BMW instead do a Bentley, and (Microsoft founder Bill) Gates is worth 7 billion instead of 15. Is it really so difficult to fathom?"

Aloisae: "Technically, CEO salaries would be part of the expenses along with other wages and so decrease the profit margin. The profit margin, however, theoretically will positively impact stock values, which would increase the worth of the CEO's presumed holdings in the company they manage ... as well as the worth of the company's stock in the average worker's pension funds and IRAs. For what it is worth, a profit margin plunge (not increase) and the resultant belt tightening that decreased reinvestment (and since this has become a protracted strategy still continuing in large part to the current day thus subsequently increased profit margins) is a significant part of the economic conditions that led to the recession. You actually want companies to have a healthy enough profit margin to reinvest or there won't be any jobs created and the economy won't rebound since level of investment has a lot more to do with economic growth and recovery than pure consumer spending."

THDUDEABlDES: "I appreciate your insights, and would agree with that to an extent. However, current circumstances prove that profit has little to do with job creation. Corporate America is flush with trillions in profit, and aren't responding by creating jobs (in America, anyway)."

There are a lot of good points made on all sides. What do you think? What roles do consumers play, and do you buy American? Share your opinions and ideas in the comments area below and in the latest stories on CNN.com. Or sound off on video via CNN iReport. Be sure to also consider a visit to CNN's Freedom Project page to learn more about other labor-related issues.