RT @CNN: A 51-year-old man has been arrested and charged in connection to the recent killings of two Muslim men in Albuquerque, New Mexico,â€¦ 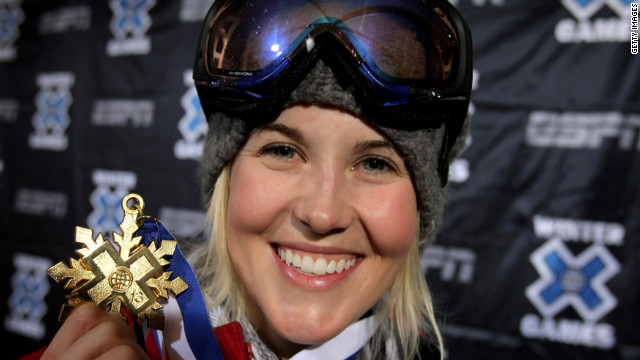 [Updated at 4:21 p.m. ET] Canadian freestyle skier Sarah Burke remains in critical condition a day after suffering a serious fall during a training run in Park City, Utah, according to the Canadian Freestyle Ski Association.

Local media reports said she had been in a coma in a Salt Lake City hospital.

â€śSarah sustained serious injuries and remains intubated and sedated in critical condition,â€ť Safdar Ansari, a neurointensivist with University of Utah Health Care, said in a statement released by the Canadian Freestyle organization.

Hospital officials declined to give further details on her condition.

Burke, 28, reportedly fell after completing a trick on the superpipe at the Park City Mountain Resort and "whiplashed" on to her side, officials said. The Canadian Freestyle Ski Association said they couldn't be sure exactly what happened just yet. A resort spokesman said she sustained a serious injury and was taken by helicopter to the University of Utah hospital in Salt Lake City.

The star's husband, Rory Bushfield, and other members of her family are with her in the hospital, the Canadian Freestyle Ski Association.

â€śSarah is a very strong young woman and she will most certainly fight to recover,â€ť Bushfield said in a statement.

The Canadian Freestyle Ski Association said that it did not have any word on specifically what happened to cause the injury but that it was told Burke wasn't doing any new tricks or anything out of the ordinary at the time of the incident.

News of her injury was weighing heavily not just on her family and friends but on the entire industry, the association said.

Burke, a native of Ontario who now lives in British Columbia, was 11th in the Association of Freeskiing Professionals overall rankings last year. She has won four gold medals in the Winter X Games, the event she was training for at the time of Tuesday's accident. She also won gold at the 2005 world championships in Finland and in 2007 received ESPNâ€™s Best Female Action Sports Athlete.

Burke is considered a pioneer of freestyle skiing and was a major force in getting it added to the 2014 Winter Olympics in Sochi, Russia, Judge said.

"She was a very eloquent spokesperson, and she continued to always be out and speak well for her sport and represent it well," Judge said. "As an athlete, that's the most important thing."

Judge said the entire sport was thinking of her and praying for the best for the woman who had has essentially become the face of the sport as well as the top female halfpipe athlete.

"She's been involved since the very, very early days," Judge said. "She was one of the first to get into the pipe and bring skis into the sport."

Judge said he didn't think the potentially devastating injury would damage the reputation of a sport that had just been added to the Olympic lineup.

"I think the sport in general is extremely safe. Obviously, there are inherent risks in any sport," he said. "Safety and athlete safety is one of the things that is paramount within our sport."

He added that often, because of the perceived dangers, the sport goes above and beyond to ensure safety. He said there hadn't been a major freestyle incident in nearly 35 years.

Still, Judge said, they would be looking at what happened to cause the accident to see whether anything needed to be reexamined.

"When there's an injury, you always do a full audit to understand what the root cause is and whether you can make anything safer," Judge said.

Right now, Judge said, the immediate focus is on doing everything possible to support Burke.

"She is an incredibly resilient and strong young woman, and we are hoping she will draw on that strength at this time," he said. "Our thoughts are with her and her family at this time.â€ť

7:33 pm ET August 10, 2022 RETWEET
A jersey worn by basketball star Michael Jordan during one of the most famous seasons in his NBA career is expectedâ€twitter.com/i/web/status/1â€¦9T
cnni

7:30 pm ET August 10, 2022 RETWEET
Amanda Seyfried has described coming under pressure to appear in nude scenes when she was just 19 years old and staâ€twitter.com/i/web/status/1â€¦sZ
cnni

6:13 pm ET August 10, 2022 RETWEET
@fakeoo7twatter @donlemon Thank you for the heads up. I saw the local journalists did a report and the park apologiâ€twitter.com/i/web/status/1â€¦zW
sarasidnerCNN

7:33 pm ET August 10, 2022 RETWEET
A jersey worn by basketball star Michael Jordan during one of the most famous seasons in his NBA career is expectedâ€twitter.com/i/web/status/1â€¦9T
cnni

7:30 pm ET August 10, 2022 RETWEET
Amanda Seyfried has described coming under pressure to appear in nude scenes when she was just 19 years old and staâ€twitter.com/i/web/status/1â€¦sZ
cnni

6:13 pm ET August 10, 2022 RETWEET
@fakeoo7twatter @donlemon Thank you for the heads up. I saw the local journalists did a report and the park apologiâ€twitter.com/i/web/status/1â€¦zW
sarasidnerCNN