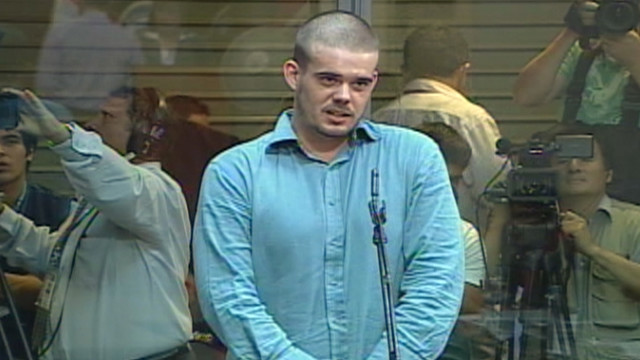 Joran van der Sloot addresses the court and says he considers himself guilty of murder.
January 11th, 2012
11:00 AM ET

Editor's note: Joran van der Sloot returned to a Peruvian courtroom on Wednesday, five days after requesting more time to "reflect" on what plea he will make in his murder trial in the death of Peruvian national Stephany Flores in 2010. Van der Sloot became well-known around the world after he was arrested twice, but never charged, in the 2005 disappearance of U.S. teenager Natalee Holloway in Aruba.

[Updated at 11:00 a.m. ET] The court is now in recess. Joran van der Sloot has pleaded guilty to the murder of Stephany Flores. The next step will be his sentencing, which will take place on Friday at 10:00 a.m.

Van der Sloot walked over to his attorney, smiled and shook his hand as court was adjourned.

[Updated at 10:59 a.m. ET] A prosecutor is now arguing about the respect of the victim and how there needs to be reparation for the victim as well. “[Stephany Flores] had her life taken from her” with so much ahead of her.

Van der Sloot is hanging his head as they talk about Flores' lost life potential.

[Updated at 10:49 a.m. ET] The court has suspended the hearing, where several other separate defendants are present, to focus solely on Joran van der Sloot.

Van der Sloot is shaking his head during the proceedings and continues to slowly rock from side to side in his chair.

The family of the victim in van der Sloot's case, Stephany Flores, is not present in court.

[Updated at 10:49 a.m. ET] Joran van der Sloot's lawyer said that his client is "deeply regretful" of the charges against him.

Jose Luis Jimenez said that van der Sloot submitted a true and sincere confession. He added that he hoped van der Sloot's cooperation would mean the court might consider a shorter sentence.

"My client has had an attitude of cooperation with the authorities from the very beginning and that must be properly valued by this court," Jimenez argued.

[Updated at 10:43 a.m. ET]  Joran van der Sloot's lawyer is asking the court to take into account all of what his client has "suffered" the day of the events in question and leading up to it.

"Joran van der Sloot on May 30, 2010 was 21-years-old and he was in fact persecuted, he was [pitted] against the entire world for the last five years because prior to the events of what happened now, because of an occurence of which he never committed and for which there is no existing evidence," lawyer Jose Luis Jimenez argued. "I refer to the disappearance of an American ciitzen in Aruba."

He added that van der Sloot was dealing with a lot of "baggage" and suffered from post traumatic stress disorder because of the attention paid to him in the case of missing Alabama teen Natalee Holloway and other incidents in his life.

"It was five years after the disappearance of this American citizen and all media pointed out my client without having any evidence that he was in fact a monster," Jimenez said.

He added there were films and books that painted him as guilty in that case.

"This is all part of the baggage that my client carried with him that fateful morning and which definitely affected him in a substantial matter," he said. "I must then briefly address the concept of what traumatic stress disorder means."

An objection was made to the discussion of the Natalee Holloway case and the relevance to discussing it. Van der Sloot's lawyer said he felt that the incident led to his client's state of mind on the day that Stephany Flores was murdered.

[Updated at 10:39 a.m. ET] Joran van der Sloot pleaded guilty Wednesday to all charges against him in the killing of Peruvian Stephany Flores.

"I am really sorry for what happened," he said.

He pleaded guilty to "qualified murder" and simple robbery.

[Updated at 10:36 a.m. ET] Joran van der Sloot smiled as he has said he will try to answer the court's questions in Spanish as best he could.

[Updated at 10:35 a.m. ET] Court officials are sorting out a bit of business right now, making sure that a Dutch interpreter is present for van der Sloot.

[Updated at 10:30 a.m. ET] Joran van der Sloot was just brought back into the courtroom after a brief delay. He peers back at the cameras all focused on him and then turns his attention to the panel of judges. He's seated next to three other separate defendants who, like van der Sloot's lawyer, were delayed by traffic.

During the hearing, a judge criticized van der Sloot for yawning, slouching and showing disrespect to the court.

Jimenez said that what people don't know is that van der Sloot had been transferred to the courthouse at six in the morning and kept in a hot holding cell for four hours, wearing a bulletproof vest and jacket the whole time.

Van der Sloot hadn't slept well because he was nervous about the process and was handcuffed the entire time, he said.  The lawyer asked the court to handle van der Sloot's arrival differently Wednesday, but there were no assurances of that, he said.

"I spoke with him on Friday and Monday and he’s very concerned about the whole process," Jimenez said. "Otherwise, he’s doing okay."

[Updated at 10:12 a.m. ET] While we wait for things to resume inside the courtroom, CNN's senior Latin American Affairs editor Rafael Romo gives more details on what we can expect to happen. He spoke to Joran van der Sloot's attorney, Jose Luis Jimenez, who said he plans to use a legal strategy called “anticipated conclusion of the process.”

This means that van der Sloot would admit guilt and accept the charges against him made by the prosecution.

Jimenez added he did not expect the three-judge panel to reduce the sentence to the minimum guidelines under Peruvian law, 7 years in prison, but he does expect a substantial reduction of the 30 years he would otherwise get if he was found guilty in a trial.

Van der Sloot was led out of the courtroom, presumably while the court waits for his lawyer to arrive.

[Updated at 10:02 a.m. ET] Joran van der Sloot and the rest of the people inside have stood up as the panel of female judges has entered the courtroom.

[Updated at 9:59 a.m. ET] The Dutch national is expected to finally give his plea in the Lima courtroom today. He is charged with "qualified murder" and simple robbery in the killing of 21-year-old Stephany Flores.

If it is not guilty, then the trial will resume before the all-female judicial panel. If he pleads guilty, the sentencing phase would begin.

[Updated at 9:52 a.m. ET] Joran van der Sloot has entered the coutroom in Lima, Peru. We expect to shortly find out how he will plead to charges in his murder trial. The 24-year-old is closing his eyes, twiddling his thumbs, and rocking from side to side as he waits for court officials to fill the courtroom.

As he stretches his neck out and awaits the chance to speak a group of reporters snaps photos and readies their cameras from behind a glass wall.

[Posted at 9:40 a.m. ET] Joran van der Sloot and his lawyer are scheduled to address a Peruvian court at about 10:00 a.m. ET in his murder trial and state how he will plead in a 2010 murder case.

The 24-year-old Dutch national had indicated on Friday that he was willing to make a "confession" in the 2010 killing of Stephany Flores, but that he did "not agree with the aggravating factors" as defined in the murder charge levied against him.

Given this statement, the panel of three judges decided to give van der Sloot until today to make a final decision. There is no jury in the case.

This was the latest twist in a case that has made international headlines, in part because of the circumstances of the killing but also because van der Sloot was arrested twice, but never charged, in the 2005 disappearance of U.S. teenager Natalee Holloway.

Police say van der Sloot killed Flores in his Lima hotel room in May 2010, then took money and bank cards from her wallet and fled to Chile, where he was arrested a few days later.

Hours before Friday's court proceedings, his attorney said that van der Sloot would plead guilty to all charges related to Flores' death. His apparent aim would have been to get a reduced sentence after making a "sincere confession."

But after the session began, he voiced doubt about the charge, leading to the delay.

On Wednesday, van der Sloot is expected to finally give his plea in the Lima courtroom. He is charged with "qualified murder" and simple robbery in the killing of 21-year-old Flores.