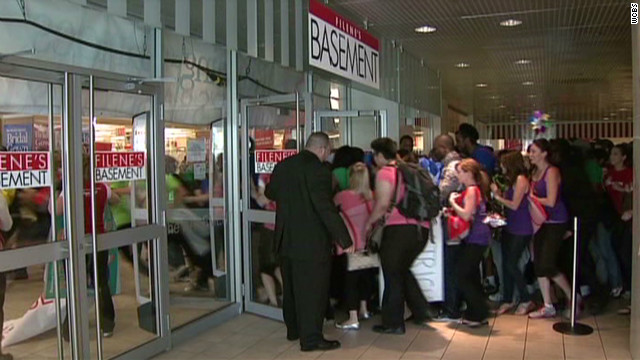 Sometimes the hype for the season’s “it” item can really get over the top. When customers just have to have it, bad behavior can ensue. Check out the chaos that these hot products caused.

Apple attack — Apple’s loyal followers love to have the latest product. In Beijing today, fans braved subzero temperatures to get the iPhone 4S. The store decided not to open in the morning, citing safety concerns over the large crowd. The throng got unruly and even threw rocks and eggs at the store. Police were forced to break up the fray. Apple has now delayed the launch of the 4S in Beijing because of the incident.

Bride wars — The annual “Running of the Brides” at Filene’s Basement was known for causing hysteria among brides-to-be looking for a bargain. Wedding dresses were deeply discounted for shoppers who could reach the dress first. The retail chain closed its doors at the end of 2011 after filing for bankruptcy, but other stores like Goodwill plan to continue the tradition.

Shoe shopping — It’s been years since Michael Jordan’s retirement, but throngs of frenzied shoppers rushed stores to buy the newest pair of Nike’s Air Jordans this Christmas season. These retro shoes are a replica of the 1996 pairs. Police had to pepper spray a mob in the Seattle area to get it under control.