Restaurateur, author and model B. Smith, one of the first African American women on the cover of "Mademoiselle," haātwitter.com/i/web/status/1ā¦A7

Pete Buttigieg's campaign alleges there are "irregularities" in the Nevada caucuses vote and asks the state Democraātwitter.com/i/web/status/1ā¦NB

Italian authorities announce sweeping closures in the country's north as they scramble to contain Europe's biggestātwitter.com/i/web/status/1ā¦hK

A person was killed in New Orleans when they were hit by a float during the Krewe of Endymion parade, the city saysātwitter.com/i/web/status/1ā¦Tv 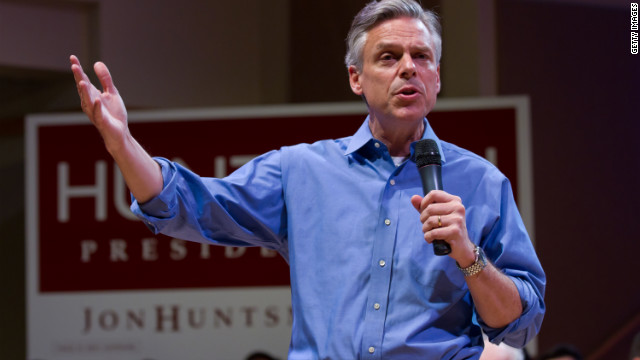 On June 21, 2011, former Utah Governor and U.S.ambassador to China Jon Hunstman announced his candidacy for president. He began his campaign in Liberty State Park, the same place where Ronald Reagan announced his bid for president in 1980. Over the past several months, the moderate conservative traveled across the country to tout his tax plan and foreign policy views. However, his campaign never really got the momentum he needed.Ā  Huntsman finished last in the Iowa caucus and third in the New Hampshire primary. Despite the endorsement by South Carolina's largest newspaper, Huntsman decided it was time to end his campaign and back one of his rivals. Today's Gotta Watch features a look back at Huntsman's campaign, his feisty exchanges with Mitt Romney and the end of his bid for the White House.

Bad-mouthing Mitt -Ā During his campaign, Huntsman attacked Romney on everything from tax policy to health care to his views on China.

A message for MittĀ - During his campaign, Huntsman sent a message to Romney, the winner of the Iowa caucuses. "Welcome to New Hampshire. Nobody cares." That, and a nod to the Grateful Dead, were some of the more memorable highlights from his run for the GOP nomination.

To quit and endorse Mitt - Ā In the end,Ā Huntsman decided he shouldn't continue on, and suspended his campaign. And, despite their "differences," Huntsman gave Romney his endorsement.

Amazon is facing criticism from two Holocaust remembrance groups for some content available on its site that they dātwitter.com/i/web/status/1ā¦nT
cnni

3:00 pm ET February 23, 2020 RETWEET
A nonprofit that searches for those missing in action since World War II has found three of the more than 20 aircraātwitter.com/i/web/status/1ā¦Ad
cnni

1:46 pm ET February 23, 2020 RETWEET
The family of a British teen killed in a road accident involving Anne Sacoolas, the wife of a US diplomat, has callātwitter.com/i/web/status/1ā¦WC
cnni

1:11 pm ET February 23, 2020 RETWEET
When she was just a child, Sitaraās job was to carry heavy bricks at a kiln in northern India. She had no choice: Htwitter.com/i/web/status/1ā¦2cTB
cnni