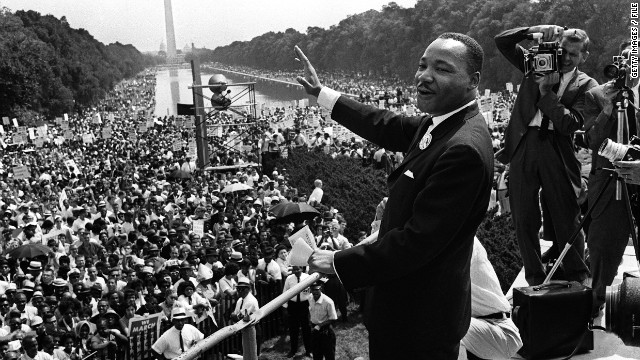 Overheard on CNN.com: Tangled up in heated discussions about rights, liberties

Freedom and civil liberties are central to the American experience, and have influenced several big issues that are in the news today. Today we look back at the sometimes-controversial but surely influential life of the Rev. Martin Luther King Jr. Other issues of personal freedom and liberty happen to also be making headlines, and they come down to the central tension between maintaining order and protecting the rights of individuals.

This article discusses the complexities underlying King's legacy, arguing that he has been sanitized over the years. It also refers to the current controversy over the memorial to him in Washington. (There's even a story about what King would think about the gay rights movement, which is itself generating lots of discussion.) Our commenters talked frankly about the many things that have been said about King.

This commenter said King was not perfect, but his legacy stands.

Tajee: "Regardless of Dr. King's skeleton's; ie. accusations of plagiarism and adultery, he still was a pivotal and monumental figure in not only the progression of the civil rights movement, but also American history. Because of his (and others') hard work, this country is more free, equal and just. He risked his life – and lost it – for the sake of a better future for all people, all races. All the while maintaining a nonviolent stance in the face of violent bigotry and oppression. People, we are all not perfect. We all have skeletons in our closet. We need to stop looking for our public leaders to be perfect as well. We must learn to judge a man by the full spectrum of his character. Dr. King's positive contributions to society far outweigh his personal downfalls. He deserves this memorial as it commemorates the life of a man who had the courage and ability to help mend a better nation.

This commenter was upset about how the memorial was built.

Guest: "I wrote (twice) to the MLK memorial folks asking why the memorial cost $120 million. Never got a single reply and that was months ago. I am in full support of honoring such a great man but I am concerned that there is no accountability on how that money was spent. If this memorial and the operation is to honor Rev. King, I am sure he would be in favor of holding people including his organization accountable for their actions. This was the premise of the civil rights movement, hold the nation accountable for what was already written in the Constitution. So I kindly and sincerely ask again to the MLK folks who are reading this comment, please show us some detail how the $120 million was spent. I am sure that past, present and future donors would appreciate this information. Thanks for your attention."

This reader said King's legacy is easy to draw.

Sphy: "Martin Luther King's legacy is fairly straightforward: Before him, black Americans suffered from domestic terrorism on a daily basis and after him black Americans no longer feared for their lives just walking down the street or doing other mundane things that we all take for granted today."

RebelRoused: "Martin Luther King Jr., regardless of his personal life, co-led a civil rights movement in America that got rid of segregation and started to make people look at individuals as individuals, not other. Do you really support no voting rights, segregated bathrooms, water fountains, dressing rooms, etc.? How about a court system that discriminated against Americans, would you like that? And don't give me no fancy little Northern twist, segregation was perfected in the North in the 1890s and put into the South at the end of the century. People were suffering beyond what was human, and it was King who led them to victory along with LBJ. To say he is not important is contrary to history. The many race riots that ensued after his assassination were dearly regressive. Martin Luther King Jr. is an example of courage, endurance, humbleness, tolerance and peace. Before that, all the other comments claiming otherwise have no bearing and are bigoted fallacy's. I salute MLK. -The Rebel."

This reader said the civil rights movement may have gone too far, and others said we are now in a welfare state because of it, threatening our livelihoods.

Jray01: "The civil rights movement was good in that it got people thinking about the racism facing black folks. Unforatuntely, they went too far in wanting government intrusion in private business."

ihateandroid: "And created a welfare state."

RebelRoused: "Welfare has nothing to do with the civil rights movement. Civil Rights Act = Segregation, voting rights. Welfare and Medicaid are different, but I know what you're talking about in general."

Another related story talks about King's concern with poverty, and a discussion is taking place there as well about how we deal with the less fortunate.

The next issue we'll tackle here is about something completely different: the Stop Online Piracy Act (SOPA).

Wikipedia, user-submitted news site Reddit, the blog Boing Boing and the Cheezburger network of comedy sites all plan to participate in a blackout in opposition to SOPA. The proposed legislation targets foreign piracy sites, but critics say it gives government too much license to restrict the online world.

Our readers are largely against SOPA, but many also said something has to be done to help stop piracy and protect content providers. A passionate discussion has ensued.

symbolset: "This is being framed as a Hollywood vs. the Internet issue. That's not what it is. These bills propose to deprive all U.S. citizens of their rights to free speech and due process of law, under the guise of protecting the content industries, which the bills do not do. This isn't a technology thing at all. This fight belongs to every American who would freely speak, who would not have the forfeit of his property turned over to a commercial interest rather than the courts. It's not enough that the bills be stopped. To have had a hand in this attempted taking of essential freedoms our nation was founded on betrays a failure of citizenship – a neglect of your civic duty. Our freedom is not for sale!"

This person said a solution needs to be found, regardless of SOPA's acceptability.

ec7967: "Another hour of arguing gone, and still not a single proposal or idea from the anti-SOPA crowd on how to protect the profits of the companies that actually produce the material. Because from everything I can see, most of the anti-SOPA crowd could care less whether these companies are actually able to profit from their work."

kylepr: "It's not reasonable to need an alternative if you can show the legislation is flawed in the first place. It's not like there is some overwhelming need for some kind of legislation. 'Oh no! Hollywood is bankrupt and we won't have ANY movies or TV shows next season!' "

ec7967: "So you're saying it's not a big deal if the companies are losing out on what they're entitled to, so long as they have the resources to continue producing the stuff YOU want. That's exactly the kind of entitlement mentality that is ruining this country - that people like you don't care about the consequences for anyone else, as long as your life is easier and more convenient."

Do people still own things, especially digital things? Some readers think not.

jberks: "Next, the government will arrest me for trading a CD with my neighbor down the street. ..."

nullcodes: "You no longer own the things you buy. If you purchase music and keep it online, you can't sell your account to someone else. Why is that an issue? One reason is you don't have a means to pass on those assets to your kid when you die? Stuff is being sold especially online under the false pretense that you 'own' it ... when actually you don't. How do you transfer your e-books to your kid? It's worse than the death tax."

Personal freedom extends to all spectrums of life, and religion is just one of many issues society must grapple with. Both religious freedom and the separation of church and state have been big talkers among our readers.

A former teacher at a Michigan religious school lost her workplace discrimination claim at the Supreme Court on Wednesday. At issue was whether the Americans with Disabilities Act applies to hiring and firing decisions involving "ministerial employees" like teachers who may have primarily secular job duties. The justices deftly avoided the larger questions raised in the church-state dispute. This issue might seem simple at first, but there are a lot of interesting layers to it, and there was lots of conversation.

One commenter thought the ruling was, well, "lame."

Lame Lame Lame: "Wow. This Supreme Court has all the insight and integrity of a drunken bowling team in Winnemucca. The Americans with Disabilities Act does not apply to religious organizations."

hamsta: "You can argue separation of church and state as much as you want, but you can't disprove the fact that American society didn't start its decline until they removed God from the schools."

Another said while it sides with the church, it actually reinforces a secular state. There was also a debate about religion and politicians, which is taking center stage with a Mormon candidate leading the Republican pack.

David Johnson: "I have no problem with churches being immune from wrongful termination suits. The court's decision actually reinforces the separation of church and state. This is a secular nation. I pray it stays that way. Vote for the Democrats. This is not a Christian nation. Nor a Muslim nation. Our laws are not based on the Christian Bible. The Christian God is very unlikely to exist. Cheers!"

Uncouth Swain: "Vote for the Dems?? You mean none of them are religious in any way?"

And with that, we turn the discussion back to you. What do you think?

Share your opinion in the comments area below and in the latest stories on CNN.com. Or sound off on video via CNN iReport. Regardless of your views on touchy subjects such as these, we ask that you be respectful with those who may hold different views.