he civil rights icon who would have turned 83 this year had a bullet not cut short his life.

President Barack Obama will mark the holiday with a service project at the Browne Education Campus in Washington on Monday morning, and the first couple will attend the Let Freedom Ring Celebration at the Kennedy Center on Monday evening.

U.S. Attorney General Eric Holder is scheduled to speak at the King Day at the Dome rally in South Carolina on Monday, according to organizers of the event. The event will "commemorate Dr. King's life, draw attention to economic and educational equalities in the state, and protest the Confederate battle flag flying in front of the (state capitol) building," organizers said.

A federal holiday to honor King, who was assassinated in April 1968, was first observed in 1986. In 1994, Congress also designated it a national day of service.

On Sunday, park rangers placed wreaths at the Washington memorial honoring the civil rights leader. Members of King's family stood beside the towering 30-foot statue of him as crowds sang "Happy Birthday" at a ceremony.

Blast kills at least 5 in Iraq

No group immediately claimed responsibility for the attack.

Al Qaeda in Iraq, which no longer holds swathes of territory in the country, is strongest in the city of Mosul, 260 miles north of Baghdad and one of Iraq's many sectarian fault lines.

Despite a decrease in overall violence in Iraq, it still touches Iraqis on a near-daily basis

Ordinary Iraqis say the violence is largely sectarian, with the once-dominant Sunni Muslims believing Shiites are responsible, and the majority Shiites saying it is the work of Sunni insurgents.

Each group believes it is being targeted by the other.

Monday's attack took place in the al-Ghadeer area, home to families from the Shiite Shabak ethnic group who were displaced from other areas of Mosul in the last few years.

At least two new parties will enter Kazakhstan's parliament, where the ruling party holds every seat.

According to preliminary results released Monday by the Kazakh Central Election Commission, the pro-business Ak Zhol (Bright Path) Party and the Communist People's Party of Kazakhstan both passed the 7% threshold set under new election law to win seats.

Ak Zhol received 7.4%, while the Communist People's Party received 7.2%, according to the results.

However, President Nursultan Nazarbayev's Nur Otan party was the winner by a wide margin. Its 80.74% vote total allows it to retain its grip on the parliament.

The elections, held Sunday, came a month after Kazakhstan imposed a state of emergency in the oil town of Zhanaozen, the site of deadly clashes on December 16. 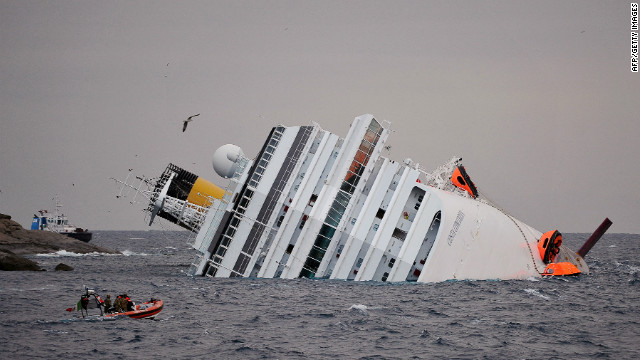 Mammoth cruise ships can be difficult to get around, even in the best of circumstances. In the worst - which is how one might describe the situation aboard the listing Costa Concordia - they are near impossible.

Yet even before the sun rose Monday morning, about 120 rescue personnel were out in or around the liner that hit rocks near Tuscany and rolled spectacularly on its side.

They were in a race against time, and in a battle with numerous challenges, to try to save or at least recover the bodies of the passengers and crew members who are still missing.

"(They are) working in very, very bad conditions," said Luciano Roncalli of Italy's national fire service. "It's cold, of course. It's dark during the day and the night... It's really, really dangerous."

Authorities have said that at least six people died after the Concordia hit rocks Friday night off the tiny island of Giglio, where nighttime temperatures have recently dipped below freezing.

Authorities are reviewing passenger lists to confirm the exact number of missing people, but about 16 are believed still unaccounted for.

Among them are two of the 120 Americans who were aboard the ship, the U.S. Embassy in Italy said.

Water, which makes many cruises serene and unique, has become rescuers' biggest obstacle.

Now turned on its side, the ship is roughly half submerged.

The hope is that a survivor has found refuge in a part that is not underwater, or perhaps in an air pocket, and can be brought out alive

In its current state, the Costa Concordia resembles a dark, convoluted cave - with its countless nooks and crannies and few ways to easily escape for air.

Rescue personnel working off the coast of Tuscany include about six underwater cave rescue divers.

They are likely equipped with twice as much oxygen as regular scuba divers, have a guideline nearby in case they need help finding a way back to safety, and have knives and whatever lights they can carry or wear, said Robert Laird, a co-founder of the International Underwater Cave Rescue and Recovery group.

Still, whatever equipment and precautions they take, "what they are doing is extremely difficult," he said.

The Nigerian government has slashed fuel prices after a nationwide strike paralyzed the country last week.

President Goodluck Jonathan made the announcement Monday. Minutes later, the federal government ordered all civil servants to report to work, or risk losing their jobs.

It was not immediately clear whether labor unions would continue the strikes. Union leaders had earlier said they would resume protests Monday.

Throngs of protesters have taken to the streets to demand government accountability and a return of fuel subsidies that ended on January 1, a move that doubled gas prices and sent the costs of other goods skyrocketing.

Scattered protests escalated into a national strike that started a week ago, paralyzing the nation of more than 160 million people.

Talks between labor unions and the government ended without a compromise late Sunday night, despite the president's participation.

Last week, a major oil union, Petroleum and Natural Gas Senior Staff Association of Nigeria, had threatened to halt production in solidarity with protesters if the two sides didn't reach an agreement.

A move to halt production would reverberate on the global market. Nigeria is the world's eighth-largest crude exporter.

Demonstrations started as an outcry against the removal of fuel subsidies and grew into anger against government corruption. Nigerians consider the subsidies one of the few benefits of living in an oil-producing nation that has little infrastructure, high unemployment and intermittent electricity.

The protests - dubbed "Occupy Nigeria" - have galvanized the continent's most populous nation.

North Korea has angrily denied allegations that it punished some of its citizens for inadequately mourning the death of its late leader Kim Jong Il.

The North Korean regime commemorated his death with elaborately choreographed ceremonies broadcast on state-run media that showed crowds of mourners beating their chests and wailing with grief in the snow-covered streets of Pyongyang.

Over the weekend, a report from the state-run Korean Central News Agency lashed out at "misinformation" that citizens who had "failed to show tears at memorial services were sent to a concentration camp."

It attributed the allegations to "reptile media under the control" of a group of "traitors" that it said were connected to President Lee Myung-bak of South Korea.

The news agency appeared to be referring to a report last week by the South Korean news website Daily NK, which monitors developments in the North through a network of sources inside the country.

The FBI is asking residents in North Dakota and Montana to help find the body of missing Montana teacher Sherry Arnold.

The 43-year-old wife and mother was last seen on a morning run more than a week ago.

"Based on investigative evidence gathered over the last few days, it is believed that Ms. Arnold may be deceased; her body has not been recovered," the FBI said in a statement Sunday.

The agency asked property owners in North Dakota and northeastern Montana to check their land for disturbed soil, and to contact law enforcement if they see anything usual.

Two men are in custody in connection to the investigation.

"We're such a small community, and crime is absolutely unheard of," said Christine Mullen, 26, who joined the search effort, even though she didn't know Arnold personally. "We don't lock our car doors. (We're) completely shocked."

All businesses in Shanghai except those deemed vital (like gas stations and supermarkets) will be closed until FebrŌĆtwitter.com/i/web/status/1ŌĆ”4N
cnni

8:53 am ET January 27, 2020 RETWEET
The growing memorial outside of the Staples center for #KobeBryant and Gigi. ŌĆ£Thank you for all you did on the courtwitter.com/i/web/status/1ŌĆ”yMxy
sarasidnerCNN

8:46 am ET January 27, 2020 RETWEET
"He was one of the greatest sportsmen in history." Nick Kyrgios and Rafael Nadal paid emotional tribute to Kobe BrŌĆtwitter.com/i/web/status/1ŌĆ”VE
cnni