A police officer in Maryland was charged with murder after authorities say he shot an unarmed man seven times while‚Ätwitter.com/i/web/status/1‚Ä¶r1

The Department of Energy has released more than 100 pages of documents related to its former Secretary Rick Perry a‚Ätwitter.com/i/web/status/1‚Ä¶Os

A Cuban man who died Monday morning in Miami is the sixth person to pass away since October while in custody of Imm‚Ätwitter.com/i/web/status/1‚Ä¶Ou

A flight chartered by the State Department has left Wuhan, the city at the epicenter of the coronavirus outbreak, t‚Ätwitter.com/i/web/status/1‚Ä¶ou

Fifty US military personnel have now been diagnosed with concussions and traumatic brain injuries following the Ira‚Ätwitter.com/i/web/status/1‚Ä¶Pj

The death toll in mainland China from the Wuhan coronavirus has risen to 131 people, authorities say‚Ätwitter.com/i/web/status/1‚Ä¶lD

A tsunami threat alert for the Caribbean has been lifted after a magnitude 7.7 earthquake struck off the coast of J‚Ätwitter.com/i/web/status/1‚Ä¶10 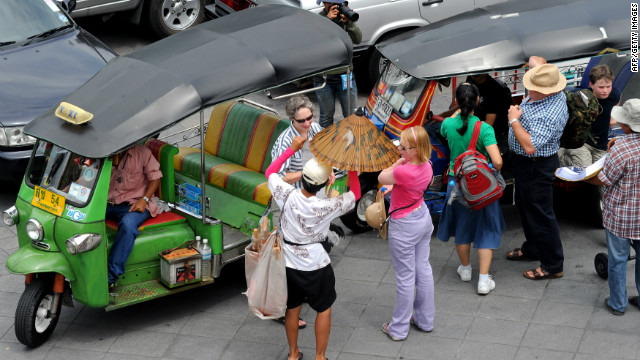 Foreign tourists are transported by tuk-tuks to visit a Buddhist temple in Bangkok.
January 16th, 2012
03:46 AM ET

The Thai government said Monday that it had found the basic ingredients for explosive devices in a building in central Thailand, just days after the United States and Israel warned their citizens in Bangkok of the possibility of an imminent terrorist attack.

A team of bomb experts and forensic police officers "found initial chemical materials that could produce bombs" in Samutsakorn, southwest of Bangkok, said Thitima Chaisaeng, a spokeswoman for the Thai government.

The team was led to the location by a Lebanese terror suspect who is accused of trying to attack spots in Bangkok that are popular with Western tourists, Thitima said.

The Thai government said the terror suspect is believed to belong to Hezbollah, the Shiite Muslim group active in Lebanon that the United States views as a terrorist organization.

The Thai authorities said Sunday they were still looking for another suspect of Middle Eastern origin, providing a sketch of his face.

The materials found Monday included 400 boxes of fertilizers weighing a total of more than 4,000 kilograms and 1,500 liters of liquid ammonia nitrate, together with 400 electric fans, according to CNN affiliate MCOT.

They were found in a shop house, a type of store common in Southeast Asia that gives onto the sidewalk and also serves as the owner's residence.

Based on comments from the Lebanese suspect, "Thailand is only a transit point to send these initial explosive materials to other regional countries," said Police General Priewpan Damapong.

A few hours before Kobe Bryant died in a helicopter crash, the NBA legend went to church and prayed. Bryant was qui‚Ätwitter.com/i/web/status/1‚Ä¶3r
cnni

1:31 am ET January 29, 2020 RETWEET
The world has never had more advanced medical science, but it's also never been so interconnected. So what can be d‚Ätwitter.com/i/web/status/1‚Ä¶lR
cnni

1:12 am ET January 29, 2020 RETWEET
RT @camanpour: Trump said he wanted his peace plan to be a "win/win". Where is the win for the Palestinians? Jared Kushner: "He's delivere‚Ä¶
sarasidnerCNN

1:06 am ET January 29, 2020 RETWEET
It has been described as one of the oldest and most played sports in history. But, World Chase Tag is the first and‚Ätwitter.com/i/web/status/1‚Ä¶hN
cnni

1:01 am ET January 29, 2020 RETWEET
The number of confirmed cases of the Wuhan coronavirus in China has now officially exceeded that of the SARS outbre‚Ätwitter.com/i/web/status/1‚Ä¶4P
cnni