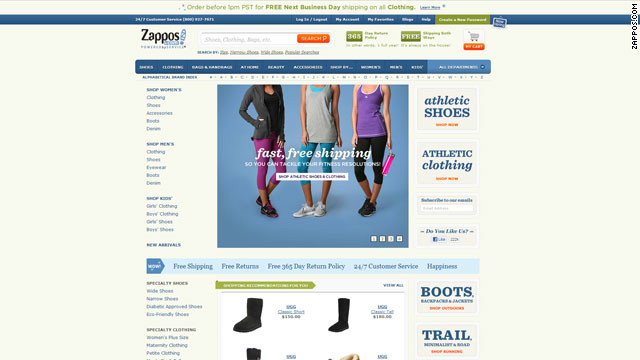 Online retailer Zappos.com is asking its 24 million customers to reset their passwords after a cyberattack, according to a posting on the company's website.

"We were recently the victim of a cyber attack by a criminal who gainedÂ access to parts of our internal network and systems through one of ourÂ servers in Kentucky," says the posting, which was sent out as an e-mail from company CEO Tony Hsieh to Zappos employees on Sunday.

The company said it had expired and reset customers' passwords and would be sending an e-mail with further instructions to all its customers. It also posted password reset instructions on its website.

Full credit card numbers and other payment info were stored on a separate server which was not hacked, the company said.

Because it expects a deluge of phone calls related to the hacking, Zappos said it was temporarily turning off its phones and would answer all inquiries by e-mail.

"If 5% of our customers call, that would be over 1 million phone calls, most of which would not even make itÂ into our phone system in the first place," the company's e-mail to employees said.

"We've spent over 12 years building our reputation, brand, and trust withÂ our customers. It's painful to see us take so many steps back due to aÂ single incident," Hsieh's e-mail said..

The e-mail also went out to customers of Zappos discount website, 6pm. com.

While large, the hacking attack was not the largest of the past year. In April, Sony's PlayStation Network, with 70 million customers, was hacked, with an "unauthorized person" obtaining users' names, home addresses, e-mail addresses, birth dates and passwords, according to Sony.

27-year-old Nathan Paulin walked a 600-meter slackline from the Eiffel Tower to the other side of the Seine river iâ€twitter.com/i/web/status/1â€¦t4
cnni

1:01 am ET September 22, 2021 RETWEET
The US Space Force, the newest branch of the US military, has unveiled a new uniform prototype for its members, knoâ€twitter.com/i/web/status/1â€¦tp
cnni

12:31 am ET September 22, 2021 RETWEET
A Texas couple says their night out with friends was cut short when the restaurant kicked them out for wearing faceâ€twitter.com/i/web/status/1â€¦ff
cnni