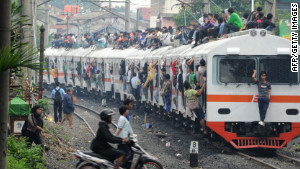 The railway said it resorted to using the concrete balls after previous anti-roof-rider efforts - including greasing the roofs, spraying roof riders with colored water, and detentions and fines - didn't stop the practice.

“Picture this: If a student has to take the train, he or she would face the threat of being killed by the concrete balls. Now his right to get to school safely is simply violated,” Yosep Adi Prasetyo, a spokesman for the National Commission on Human Rights, told the Jakarta Globe.