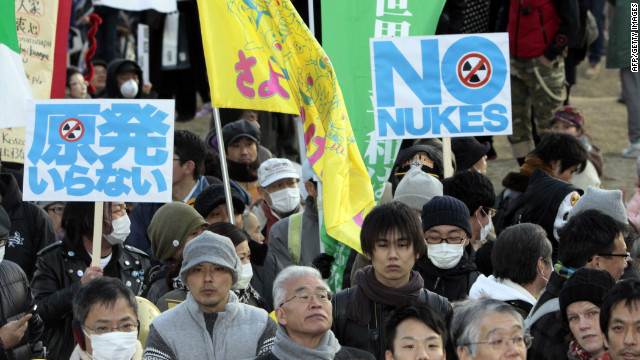 Gravel quarried inside Japan's Fukushima nuclear evacuation zone has turned up in construction projects in the city of Nihonmatsu, including an elementary school and a condominium, according to Japanese media reports.

The Mainichi Daily News, citing government investigators, reports Thursday that the radioactive gravel has been shipped to more than 200 companies and may be in everything from bridges to homes for evacuees from the March 11 earthquake and tsunami.

The government established a 20-kilometer (12-mile) evacuation zone around the damaged plant on April 22. The suspect construction material came from a quarry in Namie, within the evacuation zone, the Yomiuri Shimbun reported. But it was originally shipped to 19 companies between the time of the quake and the establishment of the zone, according to a Mainichi report.

The radiation was traced to the three-story condominium in Nihonmatsu after the city checked elementary and middle school students for radiation exposure from September to November. A girl living on the condo's first floor was found to have higher than normal exposure, according to the Yomiuri report.

Ten of the 12 households living in the condominium were families who had moved there from the evacuation zone, Yomiuri reported.

The gravel has since been traced to earthquake-proofing projects in elementary and high schools in Nihonmatsu, the Nihonmatsu Municipal Board of Education has said, according to a Mainichi report.

Chief Cabinet Secretary Osamu Fujimura said Monday that radiation exposure in the Nihonmatsu condo was well below what the government would consider an evacuation level, according to an Agence-France Presse report. Nevertheless, the city will move the four households on the first floor, according to the Yomiuri report.

Economy Minister Yukio Edano said the government will hold "emergency discussions" on creating radiation standards for building materials, according to a Mainichi report.

Kinki University professor Hideo Yamazaki told Mainichi the Japanese government should have had been monitoring the movement of any materials much earlier.

"What happened was something the government could have predicted," Mainichi quoted him as saying. "It's frustrating that the government does not think about the movement of materials, including gravel.... The government's actions have all been reactionary, and the locals are paying for it."

Breast milk may be tested for radiation

Last year, the US reported 33 unprovoked shark attacks, accounting for about 58% of the total number of unprovokedâ€twitter.com/i/web/status/1â€¦CZ
cnni