Many of these sites are using creative techniques to bring attention to the two bills - one called SOPA, the other PIPA - and making very clear their viewpoint on it.

Kidding! That blackout technique is part of the point these sites are trying to make today as they fully go dark. 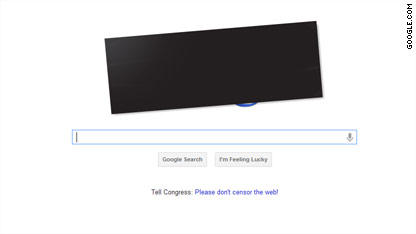 - English-language Wikipedia sites are blacked out. 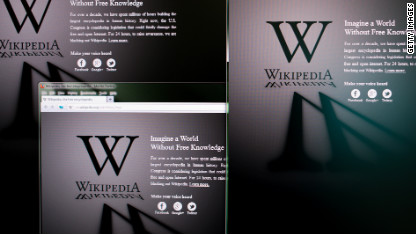 - And, don't freak out, but the tech blog Boing Boing shows a “service unavailable” error.

"For the next 24 hours I am blacking out TheOatmeal.com in protest of SOPA and PIPA. If one of these bills were to pass, this page is what many sites on the internet would look like," the website reads. "As someone who creates content for the web, earns a living from it, and has had his content pirated, I do feel that we need better legislation against online piracy. I do not, however, think that SOPA or PIPA are the legislation we need." 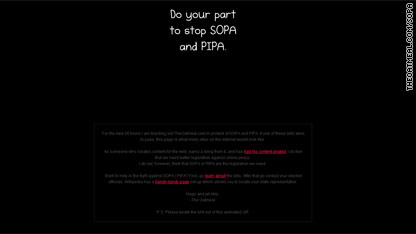 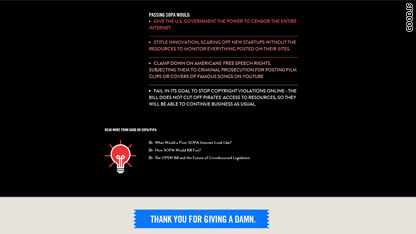 That’s why companies like Google and Wikipedia are protesting and asking people to join them.

"Fighting online piracy is important. The most effective way to shut down pirate websites is through targeted legislation that cuts off their funding," a template letter for users to send to legislators says on Google's site. "There’s no need to make American social networks, blogs and search engines censor the Internet or undermine the existing laws that have enabled the Web to thrive, creating millions of U.S. jobs."

But many companies have also come out and said they do support the legislation. Several media companies, and Rupert Murdoch himself have tweeted about their support. CNN’s parent company, Time Warner, is among those supporting the legislation.

What do you call it when ████ and ███ make a ███? A █████, of course. #sopajokes

Discussion of the bills also has been pushed back. In the House, SOPA likely won’t get a hearing until February. The Senate bill, PIPA, could be discussed in late January. Those dates are subject to constant change, and the bills are being amended regularly.

I think all of our #SOPA fears for now should be gone, the way it is now will never pass kotaku.com/5876166/the-wh… White House Doesn't support it

Some members of the House are supporting a new-ish piece of legislation called the OPEN Act, which is posted online in full if you’d like to take a look. More on the details from CNNMoney's tech reporters:

Some people, including Wikipedia’s founder, Jimmy Wales, like the legislation, or at least the idea behind it.

Others say it doesn’t go far enough to protect copyright:

On the iPad however, the site serves its full website, so although it was accessible earlier, Wkipedia is not currently available. The site is also currently displaying its articles for a very short time and then covering them with its special ‘dark’ homepage protesting against the SOPA piracy legislation. Users can hit either the “X” button on a tablet or press escape in some internet browsers if using a PC. Internet Explorer, however, does not seem to support this currently.