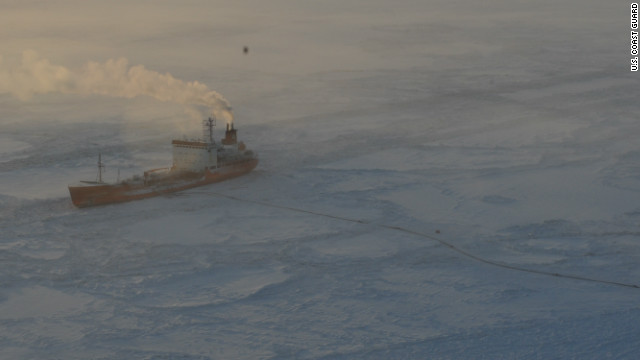 The Renda and the Coast Guard cutter Healy left Dutch Harbor in southern Alaska's Aleutian Islands on January 3, and the Healy escorted the Renda through almost 300 miles of Arctic ice, arriving off Nome on Saturday night.

The voyage was the first-ever attempt to supply fuel to an Arctic Alaska settlement through sea ice.

"I am extremely proud of the way our partners and the marine industry worked as a collaborative team along with the Coast Guard to get the needed fuel to the residents of Nome," Rear Adm. Thomas Ostebo, Coast Guard District 17 commander, said in a Coast Guard news release Thursday.

Nome had enough fuel to last until about March, but the delivery was attempted now because it would have been more difficult then, Coast Guard Capt. Craig Lloyd, who is coordinating the mission, said earlier.

Officials considered flying in fuel, but it would have taken more than 300 flights, each carrying 4,000 to 5,000 gallons, to meet the town's needs, said Jason Evans, chairman of Sitnasuak Native Corp.

The Healy's crew will now work on freeing the Renda from ice that intentionally was allowed to build around it so that hoses could reach the tanker. The Healy will then lead the Renda, perhaps starting on Friday, through more than 360 miles of sea ice to the open Bering Sea, the Coast Guard said.