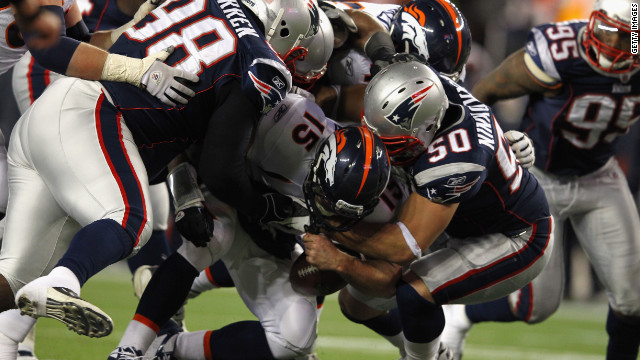 Tim Tebow, No. 15, is sacked by the New England Patriots during Saturday's playoff game in Foxboro, Massachusetts.
January 19th, 2012
10:22 AM ET

Denver Broncos quarterback Tim Tebow was so seriously injured in Saturday's playoff loss to the New England Patriots that he probably wouldn't have been able to play in this weekend's conference final had the Broncos won, according to news reports.

Tebow suffered torn cartilage where his first rib attaches to his sternum, a bruised lung and fluid buildup in the pleural cavity, the space between the lungs and the membrane that surrounds them, ESPN first reported, citing an NFL source.

The Denver Post also reported the injuries, citing an NFL source, and said Tebow would have been unlikely to play in the AFC conference final.

Broncos spokesman Patrick Smyth told ESPN he could not confirm the extent of Tebow's injuries but said the quarterback played in considerable pain after injuring himself near the start of the third quarter.

Tebow acknowledged playing hurt in his post-game comments, according to the ESPN report. Both reports said Broncos coach John Fox had Tebow's backup, Brady Quinn, warming up to take over, but Tebow wanted to stay in the game even though, by that time, victory was well out of the Broncos' reach.

"I just wanted to show character. You just continue to fight and it doesn't change who you are, how you play, how you go out there, you should be the same at all times. That's what I wanted to show, it didn't matter if it was the first play or the last play or you were down by 42. I was going to be the same player and I was still going to give everything I have. Because that's all I have to give," ESPN quoted Tebow as saying.

Tebow is being treated for the injuries this week in Denver, the Post reported.

Both the Post and ESPN said Tebow is unlikely to play in the Pro Bowl, the NFL's all-star game, in Honolulu on January 29. Tebow was chosen as a second alternate for the AFC squad.

Though his team lost to the Patriots 45-10 Saturday, Tebow won accolades the week before when his Broncos beat the Pittsburgh Steelers 29-23 in a first-round playoff game. Tebow heaved an 80-yard touchdown pass on the first play of overtime to beat the Steelers.