The White House says a Russian invasion of Ukraine "remains imminent," even as diplomatic efforts to defuse the criŌĆtwitter.com/i/web/status/1ŌĆ”5A

10 Oath Keepers, including leader Stewart Rhodes, plead not guilty to sedition charges linked to the US Capitol attŌĆtwitter.com/i/web/status/1ŌĆ”Cc 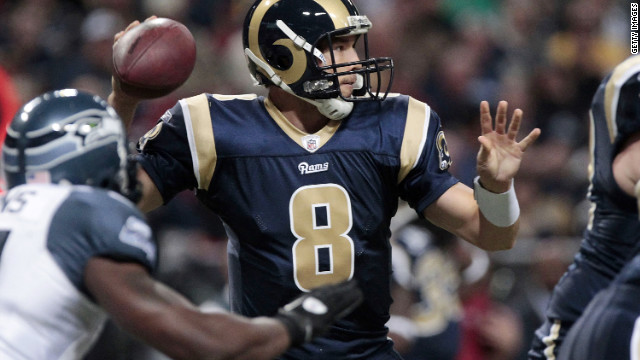 The NFL's St. Louis Rams will have a second home in London, England, for the next three seasons.

The league announced Friday that the Rams will play regular-season home games in the British capital in 2012, 2013 and 2014. Their first opponent will be the New England Patriots on October 28.

ŌĆ£This is a tremendous honor for our franchise, the city of St. Louis and our fans throughout the world,ŌĆØ Rams owner E. Stanley Kroenke said in a statement.

WeŌĆÖve seen first-hand the increased popularity of the NFL not only in London but throughout Europe. To play a role in that growth over the next three years will be incredible and is a testament to the many good things happening not only in the NFL but also in the St. Louis Rams organization,ŌĆØ said Kroenke, who is also a director of London's Arsenal Football Club.

The Rams are the first NFL franchise to schedule regular-season games in Britain under a plan approved by league owners on October 11. That plan allows the scheduling of five regular season NFL games in Britain in each of the next five years. Clubs were asked to volunteer switching their home games to the overseas venue, and the Rams plans were accepted, the league statement said. The New England-St. Louis game will be the only NFL game in Britain next season.

Patriots chairman and CEO Robert Kraft said his team was eager to return to Britain.

"The United Kingdom is home to some of our most passionate Patriots fans, including the UKPatriots, who are among our most active fan clubs overall, not just overseas.┬Ā We look forward to another memorable experience," Kraft said in a statement.

The NFL says it has a fan base of 11 million in the United Kingdom, with more than 2 million of those what it considers "avid fans," according to the league statement.

Thailand's narcotics board has said it would remove cannabis from its drugs list, paving the way for households toŌĆtwitter.com/i/web/status/1ŌĆ”Ys
cnni

3:31 am ET January 26, 2022 RETWEET
Neil Young wants his songs removed from Spotify because he says the platform is spreading Covid-19 vaccine misinforŌĆtwitter.com/i/web/status/1ŌĆ”fx
cnni

3:00 am ET January 26, 2022 RETWEET
Saturn's innermost moon, which resembles the Death Star from Star Wars, may be a "stealth" ocean world, according tŌĆtwitter.com/i/web/status/1ŌĆ”wU
cnni

2:30 am ET January 26, 2022 RETWEET
The eruption this month of an underwater volcano near Tonga was hundreds of times more powerful than the HiroshimaŌĆtwitter.com/i/web/status/1ŌĆ”RL
CNNweather

2:13 am ET January 26, 2022 RETWEET
About 4,000 people have summited Mount Everest, the world's highest peak. And only eight of them have been Black.ŌĆtwitter.com/i/web/status/1ŌĆ”6C
cnni