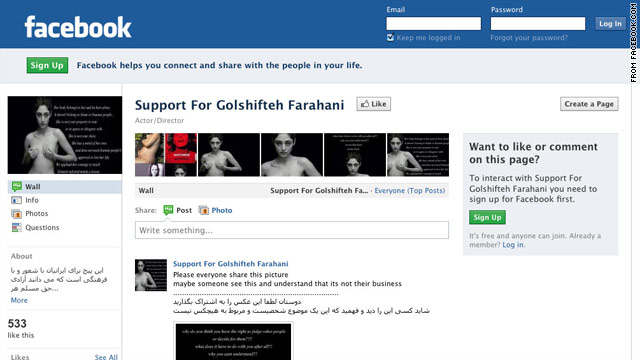 Golshifteh Farahani appears topless, cupping her breasts, in a photo in the French magazine Madame Le Figaro. Also, a video apparently made by a French film academy, features the actress looking directly into a camera as she disrobes. She stands with her breasts uncovered.Â Soon after theÂ images hit the Web, reaction was swift inside Iran, where Farahani gained fame in state-sponsored movies that forbid the mere touching of hands.

It's unclear if the actress currently lives in France. Her agency in Paris declined a CNN interview requestÂ as Facebook, Twitter and blogs lit up with incendiary remarks about her. Some say Farahani has betrayed Islam and Iran for revealing her body. Other posters are supportive. They cheer her boldness and defend her right to self-expression.

Fereshteh, a 56-year-old retired schoolteacher in Tehran, is pleased to see the actress breaking aÂ taboo, even if "her actions are against Iranian culture." Amin, a 34-year-old Web designer in Shiraz, said he didn't understand what all the fuss is about.

HeÂ also said he felt actors and actresses have a tough time working in Iran, and Farahani posing nude will only make their jobs more difficult.

3:29 am ET January 31, 2023 RETWEET
A former Wagner mercenary says the brutality he witnessed in Ukraine ultimately pushed him to defect, in an exclusiâ€twitter.com/i/web/status/1â€¦wb
cnni

3:00 am ET January 31, 2023 RETWEET
As a NASA orbiter turned its camera to the Martian surface, the face of a bear seemed to be looking back. cnn.it/3Jp6OEP
cnni

2:00 am ET January 31, 2023 RETWEET
Covid-19 has become the eighth most common cause of death among children in the United States, according to a new sâ€twitter.com/i/web/status/1â€¦tU
cnni

3:29 am ET January 31, 2023 RETWEET
A former Wagner mercenary says the brutality he witnessed in Ukraine ultimately pushed him to defect, in an exclusiâ€twitter.com/i/web/status/1â€¦wb
cnni

3:00 am ET January 31, 2023 RETWEET
As a NASA orbiter turned its camera to the Martian surface, the face of a bear seemed to be looking back. cnn.it/3Jp6OEP
cnni

2:00 am ET January 31, 2023 RETWEET
Covid-19 has become the eighth most common cause of death among children in the United States, according to a new sâ€twitter.com/i/web/status/1â€¦tU
cnni