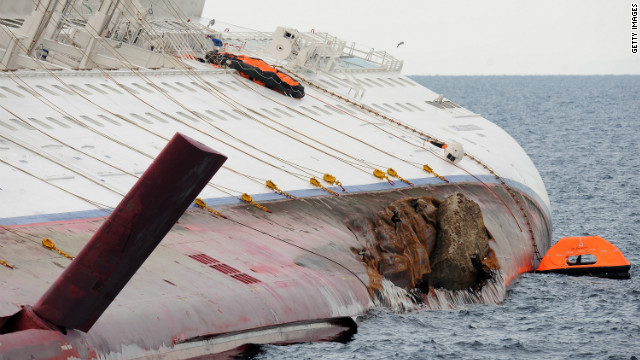 The Costa Concordia lies stricken off the shore of the island of Giglio, Italy, on Thursday.
January 20th, 2012
10:10 AM ET

Rescue workers have suspended their search of the Costa Concordia after the cruise ship moved, making it too risky for divers to operate, the Italian Coast Guard said Friday.

"When this happens all rescue forces have to leave the ship, (so as) not to put their lives in danger," he said.

The authorities are now assessing their options. One possibility being considered is an attempt to anchor the vessel to the rocks off Giglio island using chains.

But, warned Maccheroni, "It's very difficult. The Concordia weighs 110,000 tons and it's like a 300 meter-high skyscraper in an horizontal position."

Italian authorities are considering when to call off the search for survivors and start the recovery operation, which would mean salvage workers can start emptying the ship's huge fuel tanks.
At least 11 people are known to have died in the disaster, and 21 are still missing, according to the Italian Crisis Unit.
A week after the ship ran aground off the Tuscan coast

11:59 pm ET September 30, 2022 RETWEET
Iranian security forces arrested a woman after a photo of her and another woman eating at a Tehran restaurant witho‚Ätwitter.com/i/web/status/1‚Ä¶wj
cnni

10:01 pm ET September 30, 2022 RETWEET
RT @CNN: How can we change the narrative that lighter skin is better and hold companies perpetuating this accountable? Join @melissamahta‚Ä¶
cnni

Dow ends the month down nearly 9%, its worst monthly drop since March 2020, when pandemic lockdowns started in the‚Ätwitter.com/i/web/status/1‚Ä¶CT
cnnbrk