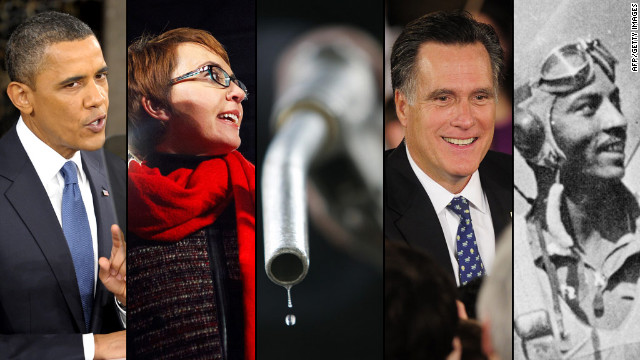 Here's a look at some of the stories that CNN plans to follow this week:

Obama gives State of the Union address, then hits the road

President Barack Obama will deliver his third State of the Union address at 9 p.m. Tuesday before both houses of Congress, along with the Supreme Court justices, the president's Cabinet and the U.S. diplomatic corps.

Among those expected to be in attendance is U.s. Rep. Gabrielle Giffords, the Arizona congresswoman who was shot in January 2011 and who announced Sunday she will resign her position to focus on her recovery. Attending the speech will be one of her last acts in office.

Less than 24 hours later, the president will hit the road to promote his policies with a three-day, five-state tour that will include stops in Cedar Rapids, Iowa; Phoenix; Las Vegas; Denver (site of his nomination in 2008); and Detroit.

Republican presidential hopeful Mitt Romney said Sunday he will release his 2010 tax return and an estimate of his 2011 tax liability on Tuesday. Last week, the former Massachusetts governor told reporters he would release his 2011 tax return in April and estimated his actual tax rate was close to 15%, a promise that did not satisfy his opponents or many voters.

"I think we just made a mistake in holding off as long as we did. It was just a distraction," Romney said Sunday on "Fox News Sunday."

With Newt Gingrich's victory Saturday in the South Carolina primary, three different candidates have won the first three GOP presidential nominating contests. Florida gets the next contest, and this week the candidates will stage two debates there to sway the state's voters.

The former House speaker is scheduled to join Romney, former U.S. Sen. Rick Santorum and U.S. Rep. Ron Paul for a debate in Tampa on Monday.

On Thursday evening, CNN will co-sponsor a debate at the University of North Florida in Jacksonville.¬ÝFlorida voters will head to the polls January 31.

Gingrich's victory in South Carolina marked a stunning turnaround for a candidate who finished fourth in Iowa and New Hampshire and whose campaign had been left for dead by observers just weeks ago.

To her, he was "Geno," the handsome fighter pilot for the historic "Red Tails." He nicknamed her "Mike" for her tomboy looks and aviator dress. Together, they were Tuskegee's "first couple" - a love story that soared beyond racism and war.

The story won't be released until Monday, but you can get a sneak peek here.

The European Union is expected to announce tough a new sanction on Iran's oil industry Monday. According to a source familiar with the matter, the sanctions will ban the import of Iranian oil and also restrict Iran's trade in gold and precious metals, as well as freeze certain Iranian financial assets, CNNMoney reports.

The widely expected move follows similar actions by the United States and the United Kingdom. They are all aimed at increasing pressure on Tehran to give up its nuclear program, which Iran says is for peaceful purposes but many suspect is intended to produce a bomb.

The sanctions are expected to have a grace period of three to eight months, an EU diplomat told CNN. This would give¬ÝEuropean refiners time to find new suppliers and Iran time to find new buyers.

Iran has indicated it's ready to resume talks with the international community over its nuclear program.

Of the 2.2. million barrels of oil Iran exports a day, about 18% is bound for European markets, according to the U.S. Energy Information Administration.

Egypt's newly elected parliament will convene Monday, nearly a year after the popular revolts that ousted President Hosni Mubarak began, with a member of the Muslim Brotherhood likely to become parliament speaker.

The Brotherhood's Freedom and Justice Party won more than 40% of the seats in recent elections, and Egypt's top political parties have agreed to nominate Brotherhood member Mohamed al-Katatni as speaker. The parliament must appoint a 100-member panel to write a new Egyptian constitution.

Liberals in Egypt fear that electoral gains for Islamists will steer Egypt down a rigid path away from democracy. But Mohamed Morsi, the chairman of the FJP, has tried to reassure Egyptians that the new constitution "will be drafted without exemption of any stakeholders or exclusion of any parties, forces or currents."

The Supreme Council of the Armed Forces, which has led Egypt's government since Mubarak's fall, has said it will hand over power to a new government once one is in place. But the transition has not been quick or transparent enough for some Egyptians, and some activists are panning a demonstration in Cairo's Tahrir Square on Wednesday, the anniversary of the start of last year's revolt.