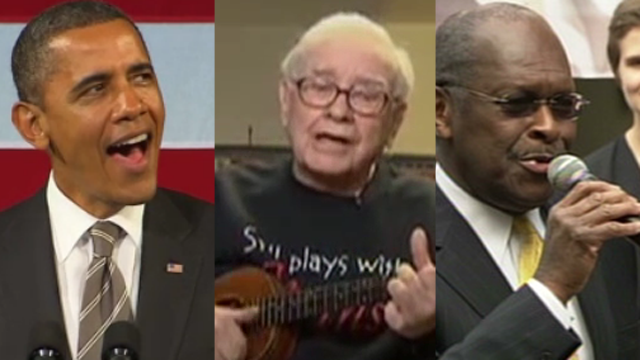 Buffett the entertainer - At first glance, the curiosity factor is pretty high on this one: Warren Buffett, strumming a ukulele, singing "I've Been Working on the Railroad" on state-run Chinese television. The video of his contribution to a Chinese New Year variety show was posted on CCTV's Spring Festival Gala website. [cnn-video url="http://www.cnn.com/video/#/video/world/2012/01/23/sot-china-warren-buffet-singing.cctv"%5D

Herman Cain believes in himself - Former GOP presidential candidate Herman Cain has sung before the National Press Club. He's even delivered an odd ode to pizza, which was an Internet favorite. Friday, the sometime gospel vocalist was at it again, belting out a bit of Diana Ross' "Believe in Yourself" at a South Carolina rally with Stephen Colbert. [cnn-video url="http://www.cnn.com/video/#/video/politics/2012/01/23/von-herman-cain-sings.cnn"%5D