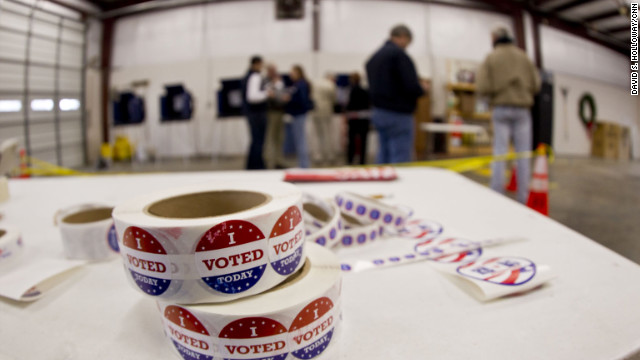 Overheard on CNN.com: 10 takes on money in politics

This week's In Depth topic takes a look at money in politics, which is a favorite subject among CNN.com commenters. Below, we've compiled some perspectives straight from our readers.

In Depth: Where money and politics collide

1. What do you think about the 'Citizens United' decision?

The U.S. Supreme Court's controversial "Citizens United" decision sanctioned unlimited corporate and union donations to nonaffiliated PACs. This ruling has proven to be one of the top targets for many commenters, with lots of readers expressing opposition.

aduklips: "Did this really need to be written? Money = influence, and Citizens United enshrined this as Constitutional doctrine. It will take years to undo that case."

2. What other kinds of organizations get involved?

This reader suggested that 501(c)(4) organizations may be a source of trouble. These are a type of nonprofit organization.

medianone: "Rest assured CNN will tell us about Super PACs, which can raise unlimited amounts for hard-hitting ads, but have to declare their donors. But, will they do as good a job with Super PACs' more secretive handmaiden, the private 501c4 organizations? Which aren't required to disclose donor names but can funnel mega bucks from those undisclosed sources directly into Super PACs where it can be spent on influencing ads. Those 501c4's are what the big money doesn't want everyone to know about. The 501c$'s are where to contribute 'if you want to promote an agenda without any fingerprints.' Kind of makes the whole idea of campaign finance reform laughable."

3. Should there be campaign finance reform?

Some readers suggest that the system of campaign financing must be overhauled.

RinosRwinos: "Until we have campaign finance reform we will have the best government money can buy. Limit candidates to a set dollar amount and have full disclosure."

4. Do individual vs. corporate contributions matter?

A recent story about the troubles faced by political newcomers got some readers thinking about who should do the contributing.

VRage13: "What this points out is how much we need campaign finance reform. I favor a maximum contribution of $25 per registered voter per election. Let the elections be about ideas. This has the benefit of banning corporation from getting involved as corporations cannot vote and the individual seeking election can only donate $25 to his/her own election bid, so no more buy elections by the super rich pouring their own money into the campaign. 'Government of the people, by the people' means that normal people should be able to run for office with a chance of being elected."

5. Is money still needed in campaigns?

This reader suggests that maybe money isn't everything, especially given all the technology out there.

Guest: "There's nothing wrong with the old constitution. There aren't integral provisions for ludicrous amounts of campaign spending in there. All that needs to happen is to get rid of the campaign laws that turned bribery of a public official into corporate campaign sponsorship. Set the cap for campaign spending at $0. Honestly, in this day and age ANYONE can get their name out there. Ban political parties, ban lobbying, and include provisions in FCC contracts to provide a single spot for candidates who have met the requirements to get on the ballot. 60 seconds, so you had better make your statement count. It would eliminate corruption, over-saturation, and mudslinging."

6. What if campaign funding came from taxpayers?

A story looking at campaign spending reform after Watergate got a lot of readers thinking about the current situation.

US1776: "The only way to fix the campaign finance system is to get ALL the private money out of politics. That means that all campaign financing must be taxpayer-funded. After all, it's US, you and me, these candidates are going to be working for. So we want them betrothed only to us. And since we fund their campaigns then we have their full and undivided attention. Then we limit the amount of time for campaigning to 6 months. No more. And we give each candidate the same amount of money for campaigning and now we have a level playing field. Oh, and we outlaw all PACS so no mysterious money coming into to corrupt our election process."

7. Should government itself be changed?

One reader suggested that government itself is structured in such a way as to encourage campaign finance problems.

8. Are we worrying too much?

Not everyone is hyped up about changing things. Some people say voters will do what they want.

longtooth: "Although I'm uncomfortable with the Supreme Court decision allowing corporations and PACs to spend unlimited money on political ads, I'm optimistic enough to think that voters can still think for themselves, and recognize BS when they see it. Not all of them, of course, but enough to negate the blizzard of money flying at them."

MM22: "long: 'I'm optimistic enough to think that voters can still think for themselves, and recognize BS when they see it.' Exactly. Voters aren't so blind and stupid that they'll vote for 1) the person who put out the most ads, or 2) the person who spent the most money. Money is not equivalent to votes. Why? Because the burden is still on the voter to cast his ballot on election day."

9. How can technology be applied to campaigns?

Some commenters got pretty creative with alternative ideas for candidates wishing to spread their message.

BossMoney: "Let's look at this from a modern perspective. Have a public slush fund which is evenly distributed for all viable, legal candidates to use from. We have the internet, so let's utilize it, shall we? Instead of all the hand-kissing and back-patting that politicians do to get contributions (which makes them feel indebted), we have a public forum within the internet where regular citizens can log on and hear stump speeches and interact via question forums to whatever candidate they choose. This would wipe out the $$$ for votes that has corrupted our system. Of course, this is just a very vague and basic concept which would have to be built upon, but it's a start."

10. What other things should be examined?

This reader went on to suggest not only public financing but improvements to the voting system.

Centerlink: "We need 3 things to save the nation:
1) Public financing of ALL elections with no contributions allowed from 3rd parties or from candidates themselves – to completely decouple corrupting money from policy.
2) Eliminate electronic black-box voting systems and return to a verifiable paper ballot with tamper-proof systems.
3) Instant runoff voting – which has been proven to consistently select the voters' most desired choice and could make the intent of the electoral college completely obsolete.
Institute those 3 things and then let the chips fall where they may."

After reading this list, what do you think? What could be fixed about our political financing system? Share your thoughts below and in related stories, and we'll follow up later. Be sure to look at some prior ideas to improve the election process that came from our readers. Also, if you're a political donor, tell us your story on CNN iReport.